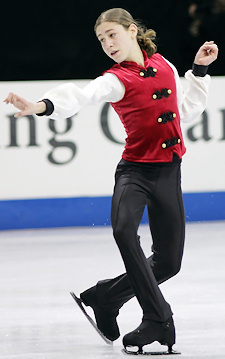 It was a victorious night for Jason Brown, who held off a valiant effort from silver medalist Joshua Farris to take home the gold medal and the title of U.S. Junior Men’s Champion.

“I’m really still in shock,” Brown said after learning he was the Junior Men’s Champion.  “I haven’t gotten the feeling yet.  I love working with (coach) Kori (Ade).  I try to make her proud, and even though she accepts the results as they happen, I still try to make her proud.”

“I’m happy that I was able to do it,” the 15-year-old said in his first interview as a national champion.  “I’ve been training hard at home, and I knew what I could do.  I knew how hard to push, how to conserve my energy to focus on each jump in the program.”

Brown finished second in the freeskate behind Farris, but still managed to earn the second highest score for a U.S. Junior Men’s Champion since the inception of the new judging system in 2006.  His total of 195.22 points edged out Farris by .19 point.

“I’m planning to stay in juniors again next year,” said Brown.  “We decided that before I even came here.”

Ade agreed. “I don’t want to send him to the senior level without the triple Axel.  We’ll work on that on the off-season, and give him another year to season.”

Farris rebounded after an uncharacteristically mediocre short program to win the freeskate with the best technical performance of the evening.

“I just went out there and had the best time of my life, and that helped me to have one of the best skates of my life,” the 15-year-old explained.  “I’m really happy.”

Farris  was the only competitor to land a triple Axel in the competition, and the silver medalist was happy that he was able to recover from an off-season injury to land eight triple jumps in total.

“This competition was the first competition of year that I was able to do the triple Lutz-triple toe combination,” Farris said.  “I did it when I won the novice title last year, but I wasn’t able to do it until now because of my injury.”

Farris earned a total of 195.03 points for his routine to  Warsaw Concerto, making this competition the closest in U.S. Junior Men’s history.

Finishing in third place with the bronze medal was Max Aaron, the leader after the short program.  Aaron skated well in his Concierto de Aranjuez program, landing seven triple jumps plus a credible triple Axel attempt, but was unable to keep pace with his younger competitors.

“It was the first time that I put the triple Lutz-triple toe into my program in competition,” Aaron said proudly.  “It was good to get that out there, and I’m happy with the way everything went today.”

The bronze medalist earned 191.86 points in the competition, and was excited about what his medal winning performance could bring him in the future.

“I’ve always wanted to be part of Team USA, and I hope that I can start to get international assignments now,” Aaron said hopefully.  “I’ve competed two seasons as a junior, and now I am excited to move up to the senior level next year for Nationals.  I’m ready for it!”

Scott Dyer moved up one place to finish with the pewter medal with the best performance of his young career.

“In 2007 I fractured my heel, so that past couple of seasons have been dedicated to me getting back into proper condition to be able to compete,” Dyer explained.  “It’s been frustrating because the recovery process was so long, but this makes it all worth it.”

The eighteen-year-old was credited with only four clean triple jumps, but he earned the highest component scores of the evening which helped him to stake claim to the podium.

“It’s good to be back at Nationals,” Dyer said with a smile.  “It’s even better because I get to go home with a medal.”

Finishing in fifth place was eighteen-year-old Alexander Zahradnicek with 168.64 points, while Austin Kanallakan slipped from third place to sixth in his fifth attempt at the junior men’s title.