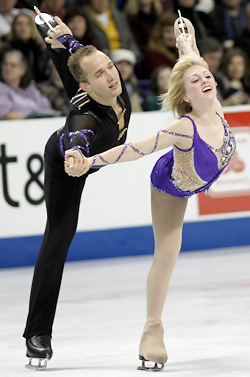 Caydee Denney and Jeremy Barrett perform to Scheherazade for their long program at the 2010 AT&T U.S. National Figure Skating Championships.

Caydee Denney and Jeremy Barrett followed up their stellar short program from yesterday with an even better free skate today, capturing their first U.S. title and an Olympic berth along the way.

“It’s unreal,” Barrett said with a glazed look on his face. “I don’t think that it has really sunk in yet.”

The newly crowned champions were solid from start to finish in their Scheherazade program, and earned a new personal best of 190.30 points as a result.  The program opened with a high-flying split triple twist, and featured a throw triple Lutz and a throw triple loop that showcased Denney’s innate ability to land just about any throw that the duo attempts.

“I don’t know how I do it,” Denney admitted when asked about her cat-like ability to land throws even when there are issues with the takeoff.  “It’s just something that I can do, and I don’t really think about it.”

Denney and Barrett also landed solo triple toe loop jumps and a double Axel-double Axel sequence, and racked up additional points by earning level four on every element except for the spiral sequence.

“This is how we train every day,” Barrett said of their performance.  “This is probably the best performance that we’ve ever given in competition.”

The gold medalists were understandably ecstatic to have been selected to represent the United States in Vancouver, but freely admitted

“When Caydee and I got together in 2008, she mentioned how many months it was until the Vancouver Games,” Barrett shared.  “We always kept that as our focus, and as it got closer and closer, it started to become more realistic.”

Barrett has further cause for celebration in that his girlfriend of five years, Amanda Evora and her partner Mark Ladwig will be making the trip to Vancouver with him next month as his teammate.

“My father kept saying to me that he thought it was possible for two teams from Florida to make the Olympic Team,” said Barrett.  “Having Amanda and Mark go along with us is so exciting.”

Both teams were also selected to compete in the World Championships later this year in Torino, Italy.

Evora and Ladwig were in third place after the short program, and skated first in the final group of contenders.  Though they only finished in third place in the freeskate, they were able to score well enough to win the silver medal – their highest finish at the U.S. Championships.

“We’ve worked so hard this year,” Ladwig admitted.  “We both skate singles sessions to help improve our skating.  Amanda has been focusing her time on getting better on the jumps, and I have been focusing on the components such as knee bend and stroking.  It just all helps us to become better skaters, and it’s nice to see that all of that work has paid off.”

The silver medalists struggled early in their Rachmaninov program, with Ludwig two footing the back half of a triple toe loop-double toe loop combination and then Evora falling on a throw triple Lutz.

Evora and Ladwig then kicked it into high gear, nailing each of the rest of their elements to finish their program and bring the audience to its feet.

“We train to skate clean, and we were very close to that,” Ladwig said.  “I messed up a double toe, but I am very proud that we got credit for our jumps.”

Evora was a little more philosophical about their performance.  “I know that it wasn’t clean, but we always strive to skate with hope and humility.  We are human and we are not supernatural.  We make mistakes, and when we do, it allows the audience to see that.  The important thing is to keep going and never give up.”

After being named to the Olympic Team, Evora and Ladwig shared a little bit about why their partnership has been so successful even with a Ladwig becoming a father just a few months ago.

“I’ve always seen skating as business,” Evora explained.  “When I am on the ice, I am focused on what I need to do.  When I am away from the rink, I focus on the rest of my life.  Mark and I are very good about not blurring the lines between the two.”

Ladwig agreed, “Amanda has been very supportive of my life away from skating, especially this season.  If I need to be late to take the baby to get shots or something, she completely understands that, and we get to work as soon as I get to the rink.”

During the press conference after the competition, Evora and Ladwig were inundated with phone calls and text messages congratulating them on their success, but it was a message posted to Facebook after the short program that particularly touched Evora.

“Anna Nicosio, who is a skater from our rink back in Florida posted a message to me that said no matter how I skate in the freeskate, that I will still be an Olympic Champion in her eyes,” Evora said through happy tears.  “To be able to inspire someone like that is so rewarding.”

Evora and Ladwig decimated their previous personal best by more that thirteen points, and earned a total of 173.78 points overall, edging out former U.S. Champions Rena Inoue and John Baldwin by just .60 points.

Inoue and Baldwin skated a courageous program to the music by Tchaikovsky, and had mixed reactions when they came off the ice from their bronze medal winning performance.

“This is exactly how I would want to end my amateur career,” Inoue said with an impish smile.  “Not many athletes can say that they had one of the best performances of their career in their final performance.   I’m just so happy”

Baldwin however, was not as pleased.

“I said earlier in the week that we have never been more comfortable,” said a frustrated Baldwin.  “I’m very content with our skating.  To put out a program like that and not get rewarded for it is a little discouraging.  I don’t think that this is the way we should be thanked.”

Inoue and Baldwin made two mistakes: Baldwin doubled a triple toe loop attempt to open the program, and the duo struggled with the catch on a split triple twist later in the program.  However, Inoue did land both the throw triple loop and their trademark throw triple Axel in the program that earned them the second best marks of the night.  Their total of 173.18 points was still only good enough for third.

“We didn’t have to do the triple Axel,” Baldwin said.  “We did it for the audience, for the fans, for figure skating.  We tried the whole time, and we didn’t give in to the system.  We did what we can do.  How it’s judged is out of our control.”

The bronze medalists were named as first alternates for the Olympic Games, and declined participation in the Four Continents Championships later this month.

“We do not want to go,” Baldwin said.  “We’re not going to accept a consolation prize.”

Baldwin later expressed that it is possible that this was their last competitive performance, and had other aspirations for he and his partner.

“I would like to get married this summer and move on to the next chapter of our lives.”

“I was pleased with this performance,” Okolski admitted.  “I think that we did ourselves a little bit of justice after such a disappointing short program.”

Castile and Okolski were solid in their performance with beautiful lifts, a giant split triple twist, and nailed their nemesis side by side triple Salchows to finish with 169.95 points in the competition.

Two-time champions Keauna McLaughlin and Rockne Brubaker continued their struggles in the freeskate, but moved up two spots to finish in fifth place overall.  Their finish is their worst in a U.S. Championships, and their record of being undefeated in U.S. competition was ended.

“It’s like a sucker punch in the stomach,” McLaughlin said of their dismal results here in Spokane.

“I thought that we were going to be a little bit higher, but we made some mistakes.   I think that all things considered, we rebounded well, and we have something to be proud of.”

McLaughlin and Brubaker earned 165.73 points in the competition, and will join Castile and Okolski on the Four Continents Team.  In addition, the duo has also been named as first alternated for the World Championships and second alternates for the Olympic Games.

Plummeting to sixth place after a second place finish in the short program was Caitlin Yankowskas and John Coughlin.  The duo had trouble on both of their throw jumps, falling on one, and Yankowskas also fell on a double Axel attempt.  The duo was named to the Four Continents Team that will compete later this month.

Rounding out the top ten were Amanda Dobbs and Joseph Jacobson in seventh, Tiffany Vise and Don Baldwin in eighth, Molly Aaron and Daniyel Cohen in ninth, and Marissa Castelli and Simon Shnapir in 10th.