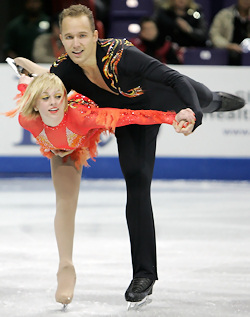 Caydee Denney and Jeremy Barrett (Southwest Florida FSC) are beginning to make the short program at the U.S. Championships look like just another day at the office.  In two seasons together, the dynamic duo has stood atop the leader board heading into the freeskate, and show no signs of letting up here in Spokane.

“I felt more relaxed today than I have all year,” said the unusually candid Barrett.  “It’s important to skate well at every competition – that is always our goal, and today we just approached it the same way.”

Denney, 16, and Barrett, 25, electrified the crowd early in the competition with a powerful interpretation of Igor Stravinsky’s Firebird.  From their opening split triple twist to their final pairs combination spin, the reigning U.S. silver medalists landed every element with the attack of champions.

“We’ve trained really hard at home, and we wanted to come out and give a good performance,” Denney explained.  “We did that, and we’re very happy about it.”

The leaders landed a clean set of side-by -side triple toes and a huge throw triple flip to earn a new personal best of 63.01 points in the short program.  The single flaw in the program was a level one back outside death spiral that really didn’t take anything away from an otherwise inspired performance.

“I just enjoy skating so much, and I want to go out there and show everyone just what we can do,” said a confident Denney.

Finishing in second place was the elegant team of Caitlin Yankowskas (Colonial FSC) and John Coughlin (Kansas City FSC) who also earned a new personal best. The Colorado Springs trained tandem are less than a point behind the leaders with 62.09 points.

“We’re training a lot smarter this year,” Coughlin explained.  “Our coaches have helped us really become better competitors this season, and all of the work has paid off so far.”

Skating to Mozart’s Piano Sonata No. 16, Yankowskas, 19, and Coughlin, 24, opened with a beautiful split triple twist, and immediately nailed the next two elements- a throw triple Salchow and side-by-side triple toe loops.  After that, they had the crowd eating out of their hands for the rest of the program.

“This is such a special town,” Coughlin said with a hint of nostalgia.  “I skated here (in 2007), and the people are so warm and inviting.  You just give them something that they can get behind because you know that they are going to cheer for it.”

“We’ve stressed so hard this year about just staying in moments,” Coughlin continued, “and I didn’t really know that we skated clean until the closing spin when Caitlin asked me if I landed my triple toe.  When I told her yep, she said, ‘Sweet’.”

But after allowing her team to enjoy the results for a full thirty seconds, coach Dalilah Sappenfield urged Yankowskas and Coughlin to begin thinking about finishing the job in tomorrow’s freeskate.

“We’re just going to skate our best in the freeskate, and make the crowd fall in love with us,” Yankowskas said of their plan of attack for tomorrow.  “We want them to see that we love to skate.”

“We had some good things and some bad things, but definitely more good things,” Evora admitted.  “We are not known as short program skaters. We usually do better in the freeskate, so we are happy to have done so well today.”

As usual, Evora and Ladwig earned high levels for their non-jump elements, and complimented that with their opening split triple twist in their Love Actually short program.  However, the Florida-trained duo struggled on their side-by-side triple toe loops and on the landing of the throw triple loop.

“This year we came in with the mentality of having clean skates,” Ladwig explained. “We have practiced all year to get closer to clean skates, but as competitions come, nerves get a little in bit in the way. But after we made mistakes, we just focused on moving on to the next element and staying focused on that.”

Evora, 25, and Ladwig, 29, are within reach of the coveted two places available on the U.S. Olympic Team with 58.76 points – a new personal best for them.

“Tomorrow I have to focus on my jumps,” Evora proclaimed.  “They are my most difficult challenge, and I want to make sure that I land them.  But of course I will take each element as it comes, and focus on hitting each one.”

Sitting in fourth place are former U.S. Champions Rena Inoue and John Baldwin (All Year FSC) after a mistake-laden program that earned them a disappointing 57.77 points.

“It’s the curse of skating eighth,” Baldwin said of their mistakes.  “We were on the wrong spot on the ice, and I lost a feature on the spin when I fell out of it.  We also had some trouble on the entrance of the lift, but we were able to complete it anyway.”

The 2006 Olympians opened their Libertango program with side-by-side double Axels that proclaimed that they meant business.  The next element – a throw triple Axel – immediately took the wind out of their sails, however, when Inoue was unable to hold the landing and fell to the ice.

“The risk of doing the triple Axel is worth it for my own satisfaction,” Inoue explained.  “All of our friends ask us when we will do it next, and they hope to see it.  I want to do it to prove to myself that I can still do it, so it is definitely worth the risk.”

Inoue and Baldwin finished strong, but were unable to keep up with the leaders due to the mistakes.

“We still have the freeskate,” Baldwin said rather coyly, “and we can earn a lot of points with it.  We can still catch up.”

In fifth place are 2007 U.S. Champions Brooke Castile and Ben Okolski, who won their only U.S. title here in Spokane.  Castile popped her half of an intended triple Salchow into a single while her partner fell on his rotated attempt.

“I thought that we skated a little bit cautious today,” Okolski said,  “and because of that we are a little bit disappointed. I think that we deserve the spot that we got, and I obviously hoped that we would have been a little bit higher.”

Castile and Okolski earned 55.64 points for their Samba Pa Ti program, and are hoping to  relive some of the glory that they have previously experienced in Spokane.

“I think that if we come and skate like we did in 2007, we should be within reach,” Okolski said of his team’s chances of making the Olympic Team.  “We’re really not that far behind considering all of the points that can be earned in a free program.”

The first year team of Amanda Dobbs (Peninsula SC) and Joseph Jacobson (All Year FSC) stand in sixth place after the short program with 55.32 points.

“It’s a good way to start the competition,” said the 16 year-old Dobbs, who will also be competing in the Championship Ladies event here in Spokane.  “At the beginning of the season, I didn’t know that I would be skating pairs, but Joseph has been very supportive of my singles skating.”

Dobbs and Jacobson opened with a nice set of double Axels, and skated competently throughout their Leyenda program.  The only error was a slight crash on their split triple twist, but they look great for being together for less than one year.

“This partnership has definitely made me push myself on the jumps this year,” admitted 22 year-old Jacobson.

Dobbs added, “I just wanted to help make him look good, too, so I had to work really hard on the pairs elements so that I could live up to his level.”

Two-time and defending U.S. Champions Keauna McLaughlin (Los Angeles FSC) and Rockne Brubaker (Broadmoor SC) had a devastating performance in the short program, and are in seventh place with 52.55 points.

“When you don’t stay aggressive, especially in pairs skating, things can go wrong,” Brubaker explained.  “We just skated a little bit tentatively, and we made mistakes here and there that we don’t usually make.”

After an opening split triple twist that earned McLaughlin, 17, and Brubaker, 23, the highest single element score of the event, things went horribly wrong. McLaughlin fell on the next element – the side-by-side triple Salchows, while Brubaker made a small mistake on the straight-line steps. The team then had a mistake on the landing of the throw triple loop, and the duo received no credit for a back outside death spiral when McLaughlin fell once again.

“I’m not going to lie. I’m upset,” McLaughlin said with a snarl.  “We’ve been practicing well, and I went out there and completely lost track of what happened.  I was thinking ‘I hope I don’t mess up’, and that is absolutely what you don’t think.  So, I’m going to work my hardest to forget about it since there is no need to dwell on it.  But tomorrow I’m going to go out and practice with a fire lit in me.”

Molly Aaron (Coyotes SC of Arizona) and Daniyel Cohen (SC of Boston) finished in eighth place with 52.19 points, while Tiffany Vise (Broadmoor SC) and Don Baldwin (All Year FSC) are in ninth in with 51.88 points.  Ameenah Sheikh and Aaron VanCleeve (Detroit SC) finished in tenth with 49.87 points.