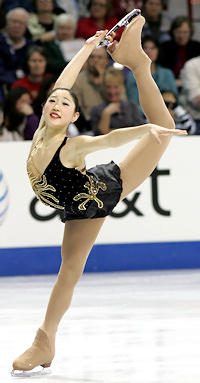 Mirai Nagasu performs to music from Pirates of the Caribbean at the 2010 AT&T U.S. National Figure Skating Championships.

The Ladies competition at the U.S. National Figure Skating Championships always has some sort of magic to it. This year, however, it also had the mystique of having no clear frontrunner.  With all of the intrigue of who would be coming out on top, the clear answer tonight is the audience.

Three ladies each, with different paths to Spokane, are essentially tied heading into Saturday’s free skate.  Given that the competition is so close, the pressure to perform well enough to earn a trip to Vancouver will separate the ladies from the Olympians.

The surprise leader of the short program is Mirai Nagasu (Pasadena FSC),  the former U.S. Champion who has a reputation of not being able to live up to the pressure of the big moments in competition.  Nagasu has called herself lazy and fat in the past, but the days of the self-proclaimed ‘evil twin’ are gone – at least temporarily.

“That was all my love for skating,” the 16-year-old said of her radiant performance.  “Last year it was difficult for me to skate from my heart, and I felt like I was able to do that for the first time this year. I am really proud of myself.”

Nagasu opened her Pirates of the Caribbean routine with something that hasn’t been seen since her win in 2008 – a smile.  And once the music started, the two-time World Junior medalist unleashed her fury.  A triple Lutz-double toe combination was followed up by a triple flip, and Nagasu sealed the deal with a gorgeous double Axel.

“A lot of people have been telling me to let all of me come out on the ice,” Nagasu said.  “I feel like I did that, and I’m really happy about that.  It kind of felt like I was in outer space or something.”

Nagasu cleaned up on levels as well, earning level four on all but one element, and also earned her highest component scores of the season.  Her total of 70.06 points is a mere .43 points ahead of second place Sasha Cohen (Orange County FSC), and just .71 points ahead of third place Rachael Flatt (Broadmoor SC). Even with her lead, Nagasu doubts her chances to make this Olympic Team.

“I’ve never really thought about (the Olympics),” Nagasu admitted.  “I wasn’t even considered a candidate for the Olympics, and I just wanted to prove to everyone that I am the future of U.S. Figure Skating.  I’m not in my personal bubble all the time, and I do have access to the internet.  I can read what people write about.  I just want to be the dark horse and come from behind even as I am in first place.”

Cohen’s return to competition has been the story of these championships thus far, overshadowing impressive wins last weekend by pair champs Caydee Denney and Jeremy Barrett and men’s champion Jeremy Barrett.  When the two-time Olympian took the ice for her Espana Cani program, the audience welcomed her back with deafening applause.

“I was a little bit nervous, but I was just taking one thing at a time,” Cohen admitted.  “I tried to let that go and stay in the moment.  I have so many friends and family watching, and the people here in Spokane are just so happy that I am here.  After my program, just seeing everybody stand up, I was just so happy to be competing here.  It was a very special night for me.”

Cohen’s skating aside, the 2006 U.S. Champion presents herself with a newfound maturity, and has grown into a woman who is in control of her own destiny.

“One of my friends told me that I need to be lighter, to be faster, to be stronger and have better endurance than I’ve ever had before,” Cohen said.  “I was like ‘I need to ramp it up a little more to another level’.  I’ve been trying to do everything so that I have no regrets.”

Cohen did back up the hype surrounding her return with a great skate, landing a triple Lutz-double toe loop combination to start, and then a triple flip with relative ease.  After that, it was just all a numbers game for the 25-year-old.

“In the short program, every element is so important that it’s almost like you can’t let yourself get into the moment,” Cohen observed.  “You have to count every spin and pay attention to numbers.  You’re counting over and over.  It’s the one part of the system that I don’t like.”

Her total of 69.63 points is a new personal best for Cohen at a U.S. Championships.

Skating first out of a handful of contenders,  Flatt opened her Sing, Sing, Sing program with a triple flip-triple toe loop combination that required every bit of muscle in her body to land.

“I was a bit anxious after I landed the flip,” the reigning U.S. silver medalist admitted.  “That was probably the worst landing that I had on a triple-triple all week.”

Flatt also landed a triple Lutz and a double Axel and used peppy choreography to propel her to the early lead in the competition.  Her short program score of 69.35 points eclipsed her previous personal best by more than six points.

Though Flatt is within spitting range of earning one of the two Olympic berths on the line, the high school senior refuses to think too far ahead.

“(The Olympics) is obviously part of nationals this year, and there is a lot of buzz surrounding it,” Flatt noted.  “It has affected me a little bit where I am mentally, and unfortunately it has probably made me a little more excited than normal.  But I had a great short, and I still have a freeskate to perform before I can think about it any further.”

Ashley Wagner (SC of Wilmington) had to wait some four hours from the start of the competition to skate her Once Upon a Time in America program, and admitted to struggling with her place in the draw.

“I’m still not really on this time zone yet,” Wagner admitted.  “I fell asleep a little bit back stage before my program since it’s about 2 A.M. where I’m from.  That was a little tough, but definitely by the long program I will be fine.”

Wagner opened with a triple flip-double toe loop combination, but then fell on her triple Lutz attempt.  The 18-year-old  fought hard to salvage every point that she could in the rest of the program, earning high levels on the rest of her elements. In the end, she finished with  62.55 points for fourth place.

“Fourth place is a lot easier to come back from than twelfth last year,” Wagner said with confidence. “I’m actually pretty happy with it considering how I did, but my main goal for this short program was just to go for everything.  I think that I have a tendency to hold back a little bit and skate conservatively.”

Wagner was rather philosophical about her mistake, and was somewhat hopeful about her chances to erase that from her memory heading into Saturday’s freeskate.

“I think that I might have gone for maybe a little too much,” Wagner said of her Lutz attempt.  “I reached for it at the end, and kind of ate the ice on it.  But mistakes are mistakes, and I just need to go out and skate the best long that I can, and I feel like that I am in a good place to do that.”

Junior Grand Prix Finalist Christina Gao (Northern Kentucky SC) was another surprise of the evening, finishing in fifth place after skating a strong program that included a triple toe loop-triple toe loop combination.   The 2008 U.S. Junior bronze medalist trains under the tutelage of Brian Orser, and shares practice ice with Kim Yu-Na.  The 15-year-old scored 56.26 points for her Morning Passage short program, and will skate in the final warm up group in her Championship debut.

Amanda Dobbs (Peninsula SC) continued to build on last week’s impressive seventh place finish in the Championship Pairs division by finishing in sixth place with 56.11 points.  The 16-year-old had lesser jump content than many of the other ladies, but the quality  was first rate, and that secured her a spot in the final warm up as well.

“I’m not sure what happened,” said the stunned champion.  “I’ve skated good shorts all the way up until now this season, so I was a little shocked with how it went.”

2006 Olympian Emily Hughes (SC of New York) doubled an intended triple Lutz, and finds herself back in eighth place, while Alexe Gilles (Broadmoor SC) and Beatrisa Liang (All Year FSC) are in ninth and tenth place, respectively.