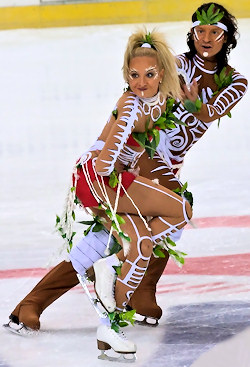 Oksana Domnina and Maxim Shabalin are the reigning  World Champions in Ice Dance, however, they have fallen off the radar this Olympic season after missing the Grand Prix series due to Shabalin’s reoccurring knee injury.

Last week, the team finally debuted their programs at the Russian National Figure Skating Championships in St. Petersburg. The question wasn’t if they would win, but what kind of programs they had picked for this season and what shape are they in.

People were in for a surprise. Domnina and Shabalin went into a completely and new direction with their “Aboriginal” original dance, and also looked different in their dramatic free dance to The Double Life of Véronique.

“We’ve searched for a long time,” said Domnina of their original dance. “We were looking at different choices. We wanted to do something new and unusual and Natalia Vladimirovna (Linichuk) suggested this music to us.

“At first we declined,” said Domnina. “This music was difficult to understand when we heard it for the first time, and I think it is also difficult for the spectators and others.”

Nevertheless, the team decided this would be something new and different and they went for it. “I don’t remember what I thought when I heard the music for the first time,” said Shabalin. “I think this music has found us, not we found the music. Of course, this was a risk, but we went for it because we were hoping to be different from the other couples.”

The former European Champions did  research on the internet and watched videos of Aboriginal dances. “Actually we put this dance together rather easily although it is something unusual for us,” Domnina pointed out. “We didn’t have any  major problems with creating and doing these moves. We’ve watched video clips in the internet of these dances and it is really like this – complete with the leaves around the knees (see photo).”

It takes Shabalin about 15 minutes to apply his make-up, while his partner needs about 45 minutes. At nationals, make-up artists were on hand to help, but usually the skaters do it themselves. “Usually we are sitting and chanting mantras for five hours and are applying the make-up to each other,” joked Shabalin. “This was at the beginning, but now the time is shorter and we went down from five hours to about 20 minutes.”

Their free dance, with its flowing moves to the dramatic music of Zbigniew Preisner, is more similar to the style spectators are used to by this Russian team; however, they still look different from their past two programs to classical pieces by Aram Khachaturian.

“We’re just trying to put everything into this program that we have learned in the past 20 years of skating,” explained Domnina, “but in general, we wanted to tell about passion, love, and hate – these human feelings between man and woman.”

She went on to reveal her little secret that her little dog Topi – a Yorkshire Terrier – had input in selecting the music. “I just had bought the little dog and I went to Natalia Vladimirovna’s house to listen to some music. So we were looking at all kinds of music. There was so much that my head was swollen. My dog was running around, and Natalia said, ‘Let’s be serious now. I’m suggesting this music and that music’. When she switched on the music of our free dance, my dog is sitting there and turning her ears.”

“We laughed,” continued Domnina, “but the dog had reacted to this music. When we switched on the music for the original dance, my dog started to race around the room like crazy and we understood that maybe this music is what we need. It was really like this, I’m not lying. For some reason the dog reacted to these two pieces of music. She didn’t react to any of the others.”

The skaters are also using acrobatic belts in some of their lifts and moves in the free dance. The belts look like a part of Domnina’s costume, but Shabalin uses them, for example, in the first rotational lift to swing his partner around.

“Obviously we asked if we could do it  and there were no objections from the chairman of the ISU Ice Dance Technical Committee, Alexander Gorshkov, ” relayed Domnina. “These belts were an idea of the acrobat we have been working with. We first used them in the lifts, but then we felt we could use them in other moves.

Ice dance is becoming more and more acrobatic anyway,” she added. “Nobody has done this before, and it wasn’t forbidden, but some people don’t like this idea.”

In spite of the difficult start of this important season, Domnina and Shabalin are hoping that their hard work will bring them to the Olympic podium in continuation of the rich tradition of Russian ice dance. Right after winning their World title last March, Shabalin had to go to southern Germany again for therapy for his left knee.

“I spent four months in Germany,” he recalled. When he came back to their training site in Aston, Penn. in July, the skaters started working on their programs. They planned on competing in the Grand Prix Series, but the knee stopped them again. Instead of skating at the Rostelecom Cup in October, Shabalin saw doctors in Moscow. They advised him to rest. The team resumed their practice together in November. Shabalin is using a brace when skating – both in practice and in competition.

“I’m using a brace, to limit the movement and to protect it (the knee),” the 27-year-old explained. “I was trying out different ones. There are a lot of models existing. First I tried one that was not visible to the eye, but they are done for people who don’t move around so much. Therefore, I’m now using a brace specifically made for athletes.”

Although the team’s programs are interesting and look like winning material, they are not perfect yet. The skaters admitted that they felt rusty after their long break from competition. “We had enough from sitting around,” said Domnina. “We wanted to get out and to compete. We got a lot of remarks at nationals about what we need to do and we understood ourselves what we need to do. There is enough work to do, so we’ll continue to train.”

While the team is continuing to work on elements, run-throughs, etc., it is hard for them single out any one thing. “Technically and choreographically, it isn’t a 100 percent,” admitted Domnina. “There is so much work I don’t even see the end.”

The Russians went back to the USA right after Nationals. They did not spend New Year’s Eve (the biggest holiday in Russia) at home with family and friends. They plan to compete again at the European Championships in Tallinn, Estonia in less than two weeks before going to Vancouver in February for what could become the highlight of their career.