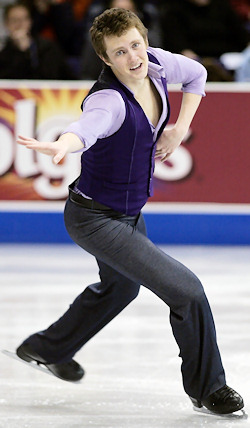 Jeremy Abbott performs to A Day in Life by The Beatles at the 2010 AT&T U.S. National Figure Skating Championships.

The buildup of the  championship men’s competition lived up to the hype tonight in the short program in Spokane.

Three former U.S. Champions were expected to battle it out for the top three spots, and at the end of the competition, that’s exactly where they stood.

Leading the way is  reigning champion Jeremy Abbott (Detroit SC) after  a brilliant performance to The Beatles’ A Day in Life – the same version that former World Champion Michelle Kwan introduced to the skating world back in 2001.

“I’ve had this song on my iPod for quite a while,” Abbott said with his trademark crooked smile.  “I tried to use this music last season, but it didn’t work out.  I first heard it being used in the movie Across the Universe, and when the opportunity came up to select music this season, it just worked out.”

The music worked for the 24-year-old as he skated perhaps the most brilliant short program of his career – complete with a triple Axel, a triple flip-triple toeloop combination, and a solo triple Lutz.

“I felt so much more nervous here than I have the rest of the season,” admitted the leader.  “I just had to stomach it out, pay attention to the elements, and make sure that the emotions didn’t take over.  I’m just so proud of myself that I was able to maintain control and skate as well as I did.”

Abbott earned both the highest technical and program components of the evening, and finished with a new personal best of 87.85 points to take the lead.

Finishing in second place was World Champion Evan Lysacek (Dupage FSC) with a strong performance to the Stravinsky’s Firebird.  He also earned a new personal best score of 83.69 points with a program that he has been reworking since winning the Grand Prix Final last month.

“It’s sort of a process of experimentation as the season progresses,” the 24-year-old admitted.  “I made a lot of changes to my spins and footwork here, so I was really focused on that.  I have a proven equation of a program that scored pretty well this year, and this was just about seeing how much more I could earn with the changes that we’ve made.”

Lysacek opened with a step out on his triple Axel, but was rock solid from that point forward.

“The only real thing that I have been struggling with this week here is the width of the rink,” Lysacek admitted half jokingly.  “I got too close to the wall on the Axel, but that happens.  I’m big.  I have to make sure that I’m not hitting the judges.  I think that one of the judges thought that I was going to land on her.”

But the two-time U.S. Champion wasn’t too concerned about the error, and looks to skate even better in the freeskate on Sunday.

“The freeskate is a great practice run and the last step in our preparations for the Vancouver Olympic Games,” Lysacek explained.  “I need to use it as a tool as the Games approach, and will focus on completing each element as they come.”

In third place is three-time U.S. Champion Johnny Weir (SC of New York), who also earned a new personal best of 83.51 points – just .18 points behind Lysacek.  Weir ended his program a little early, but covered it well by improvising some of his own dance moves suited to the style of music.

“It seems like every competition that I get all of the elements done earlier and earlier,” Weir confessed.  “It’s sexy Latin music, and I never really know what to do to fill the time, so I usually just bop my nose or snap my head.  Today I just felt like touching myself a little bit.”

Weir skated first of the main contenders in the competition, and got things off to a great start.  The Grand Prix Final bronze medalist opened with a nice triple flip-triple toeloop combination, and then nailed the triple Axel that troubled him at last season’s championships.

“I stayed relaxed and concentrated on getting the jumps done,” Weir said when questioned about his level of concentration at the beginning of his program.  “It’s better than speed skating around the rink and splatting all over the place.”

Skating to Raul DiBlasio’s I Love You, I Hate You, Weir showed more confidence and passion than he has in recent times, and was happy to be back in the spotlight.

“In terms of Lady Gaga, I think that this performance leaves me almost ‘Speechless’,” Weir playfully responded when asked how to sum up his performance his current idol’s lyrics.

But the 25-year-old was quick to remember that the competition is not over, and while there is cause to be pleased, the work is not yet done.

“I think that the time to relax and celebrate is on the plane ride home,” Weir said very academically.  “We have to use this competition as a stepping stone – hopefully for Vancouver.  I have a freeskate that I still have to perform, and there will be no relaxing until that is completed.”

Finishing in a distant fourth place was  Adam Rippon (SC of New York), the two-time World Junior Champion, with 72.91 points.

Rippon had a solid opening to his Jonathan Livingston Seagull program, nailing both his combination jump and a triple Axel.  With the crowd completely behind him, he then doubled his trademark Lutz jump, and later fell in the middle of his straight-line steps.

“I am still in shock after I missed the triple Lutz,” said a dejected Rippon after his skate.  “That is my best and favorite jump.  I just thought too much about the jump and there is no reason to think.  I can tie my skates, and I don’t have to think about it.  Why did I have to think about my triple Lutz?”

“But the most disappointing part is that I fell on my footwork,” the 20-year-old added. “I want to apologize to my coaches because I don’t make those mistakes even in practice.”

Even with the mistakes, Rippon was rewarded nicely for a program that showed his maturity as a skater, and he was nearly overcome by outpouring of support given to him from the audience.

“To get a standing ovation after a program that I considered to be a disaster is very humbling,” Rippon admitted.  “I allowed myself two seconds to be upset about the program, and then I realized that the audience recognized all of my hard work.”

The surprise of the evening was Armin Mahbanoozadeh (Washington FSC), who is making his senior debut at nationals. He finished in fifth place with 72.56 points.

“It’s been a long time since I skated a good short program at nationals,” admitted the 18-year-old.  “I can’t believe it right now as I expected nothing other than being able to finish my program here in Spokane.”

Mahbanoozadeh opened with three clean jumping passes, including a triple Axel in his Virtuoso program, and credits his success to his coaches and medical staff here in Spokane.

“My coaches taught me how to be calm and have fun,” said the 2007 U.S. Novice Champion.  “The medical staff here in Spokane has helped me so much with my hip injury that I was able to get through my programs.  I have been seeing them three or four times a day since I have been here, and it has really helped me.”

Former silver medalist Ryan Bradley (Broadmoor SC) finished in a disappointing sixth place after doubling attempts at a triple Axel and a triple Lutz in his Dark Eyes program.  The mistakes were particularly disappointing for the 26-year-old as he was the only skater of the evening to land a quadruple toeloop-triple toeloop combination.

“I slipped on the entry to the Axel, but I have muscled that out earlier this season,” said a disappointed Bradley.  “The Lutz is something that kind of haunts me because it is the same mistake that I made last season, and I just thought too much about not making the same mistake again.”

Bradley finished with 70.63 points, but still has an outside shot of making the squad heading to Vancouver should he be able to skate a clean freeskate.

“I am planning to do two quads on Sunday,” said the unusually somber Bradley.  “I have a lot of work to do, but anything is possible.”