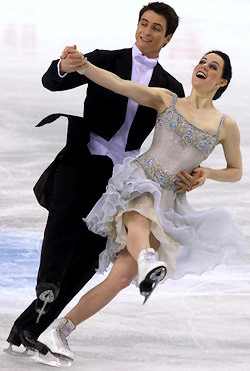 Post-Olympic World Championships are often considered to be a bit of a letdown as they are held a month after the major event of the last four years. However, if the Compulsory Dance portion of this event is an indicator of the things to come, this year’s edition will prove to be an exception to this rule.

Following the first segment of ice dance competition, less than a point separates the Olympic Champions Tessa Virtue and Scott Moir (CAN) from their training mates and Vancouver runner-ups Meryl Davis and Charlie White (USA).

Federica Faiella and Massimo Scali of Italy put a comfortable three points between themselves and the other bronze medal contenders, but three other teams have a chance to overtake them later in the event should the Italians make any mistakes.

Virtue and Moir, who burst into the world scene by performing brilliant lyrical free dances, had by far the best interpretation of the floating and lighthearted “Golden Waltz” compulsory dance. Not only did they execute all the required steps with excellent precision, posture and flow,  they added something uniquely ‘theirs’. The Olympic Champions immersed themselves into the music and character, and turned what’s normally considered a “technical exercise” into an exciting and engaging performance. They were awarded a new personal best of 44.13  (22.22/21.91) points for their efforts.

“It felt strong,” commented Virtue afterwards. “We were excited to get out there, maybe the last time having to skating this. It was not hard for us to motivate ourselves after winning the Olympic title. We have never gotten a world title, so it’s something we’ve been planning on. We’ve expected a huge crash after the Olympics, but we’ve done two weeks of great training after that and it’s not hard to stay motivated when you’re training with Meryl and Charlie.”

“We are excited to be at another World Championships,” added Moir. “It’s a huge competition. It was great for us to get back and to be able to push ourselves just a little bit further. We’ve come a long way in two weeks, so we’re excited to show that.”

In contrast to the smooth dance by the Canadians, Davis and White were  faster and crisper, delivering each and every step with confidence and relish. While their interpretation was very strong, it appeared to lack the  the total commitment expressed by Virtue and Moir. However, their technical proficiency and precision allowed the Americans to finish a close second with 43.25 (22.00/21.25) points.

“It was a really confident performance for us,” commented Davis. “Before we went out, Marina (Zueva) and Igor (Shpilband) were both just saying, ‘we’re really well trained on this dance, so just go out and enjoy performing it’, and that was what we were trying to do.”

“We put a lot of work into our compulsories this year to really step it up,” added White. “Conceivably this will be the last year of compulsories, so we really wanted to make it count and that definitely showed tonight.”

“It was really different coming into this competition for us,” continued Davis. “With all the excitement from the previous competition, it’s been a little bit more challenging to focus on Worlds. But we’ve known we’re coming to Worlds all season, so we are prepared for this.”

The only other team to receive a score above 40 points was Faiella and Scali. Skating last out of 27 teams, the Italians provided a highly proficient and expressive closure to the event. Although they were not quite as light on their feet as the two North American teams, the experienced team maintained excellent speed and close positions throughout, and Federica in particular, gave an excellent interpretation of the rhythm.  To the delight of the enthusiastic home crowd, the students of Natalia Linichuk and Paola Mezzadri posted a new personal best of 40.85 (20.50/20.35) points.

“We felt a lot of pressure, because probably it is the last compulsory dance in the history of international events” explained Scali. “But we did a good job and doing that in Italy is fantastic. We are in very good condition and we enjoy every step we made on the ice as it should be when you dance. It was important to begin strongly and the third place with out personal best is a perfect start.”

“The public helps you a lot in this situation,” offered Faiella. “It supports you, and makes you feel better and more confident. We danced very well today. Now we have to keep our concentration and stay relaxed at the same time.”

Below them three couples are virtually tied for  fourth place. For France’s Natalie Pechalat and Fabian Bourzat, the waltz has always been one of their strongest dances as it highlights their excellent basic skating skills and unison. Their  performance in Turin was no exception to the rule. The students of Alexander Zhulin were confident and smooth and  also posted a new personal best of 37.75 (18.80/18.95) to edge out Russia’s Jana Khokhlova and Sergei Novitski for the nominal fourth place.

“We skated very well today,” said Bourzat. “We felt good and we made our personal best. We are very happy with our performance.”

“The Compulsory Dance usually isn’t our best,” added Pechalat, “but today we skated very well, so we can be confident for the Free and Original Dances. It’s the fourth time we are in Turin and I really enjoy this arena because it’s big and open: it seems that we are dancing for everybody and not only for judges.”

Khokhlova and Novitski expressed the character of the dance perfectly and demonstrated good flow and speed, but they fell slightly behind the music at one point and had to catch up. The team from Moscow received 37.70 (18.68/19.02) points.

“Everything went well,” said Khokhlova. “It is very nice to perform here for the third time already, and I think that this arena still keeps a special Olympic spirit. We have very nice memories about out first Olympic Games and it was pleasant to skate here.”

Great Britain’s Sinead Kerr and John Kerr started strong, with very close positions and great speed and flow, but later they drifted slightly apart and had to work to maintain the same distance between them. Also their lines and posture lacked the precision of the higher placed couples. The students of Evgeni Platov are currently in a close sixth with 37.56 (18.56/19.00) points.

“It’s a shame (that they want to cancel compulsory dance)” said John Kerr afterwards. “But in the need of television it maybe the best. I just hope that ice dance won’t lose its foundation.”

“I would say that Ice Dance competitions are approaching more to become a Pairs competition,” agreed his sister. “Maybe even if there is not much audience, it is a ground of Ice Dance. Ice Dance will lose something, but it is how the sport is developing… more to the athletic way.”

Anna Cappellini and Luca Lanotte from Italy gave arguably their best ever performance of the compulsory dance, but still finished a somewhat distant seventh with 34.05 (17.06/16.99) points. The Italians have improved almost every aspect of their performance compared to what they have shown early in the season, and the audience certainly appreciated their sparkling interpretation of the dance.

“I was excited to compete here in Italy,” said Lanotte. “I must confess that when I went out and I heard the roar of the public that welcomed us, I felt really excited. I have to say that also in Vancouver people were very kind and warm, but the crowd in Torino is fantastic.”

“I was very proud to perform in front of the Italian public,” added Cappellini. “There was no pressure on us. I can say that we skated with a lot of pleasure and that our performance is the result of the skating quality we had acquired during these years of practice. The Waltz is a dance that suites us very much. I am annoyed by the proposal of removing the compulsory dance, but I am also curious to see what is on their mind.”

Alexandra Zaretski and Roman Zaretski of Israel  were able to hold off two younger North American couples on the strength of their program components scores. The team from Israel gave very proficient performance (33.79), but struggled to maintain the flow and effortless expression towards the end of the dance. They are currently in eighth place.

“We came here to enjoy,” stated Roman. “The Olympic Games were the most difficult event in this season, but here there is no nerves and so it is very easy and pleasant to skate.”

“By the end of the season it’s getting more difficult,” disagreed his sister. “There is no strength anymore, but you still have to work hard. So we came from Vancouver and right back to training.”

The students of Galit Chait are closely followed by Vanessa Crone and Paul Poirier (33.32). The Canadians were very smooth throughout, but their posture was not relaxed enough to reach the effortless expression demanded by the dance.

“We are very happy for making here our season best,” said Poirier. “It’s amazing to do a compulsory dance. We really enjoy it and so we hope that compulsory will remain in  next year’s World Championship.”

USA’s Emily Samuelson and Evan Bates (32.61) edged out Russia’s Ekaterina Bobrova and Dmitri Soloviev (32.43). Both teams skated well, but while their technical level was very high, their expression still had some room for improvement. They are currently in 10th and 11th place respectively.