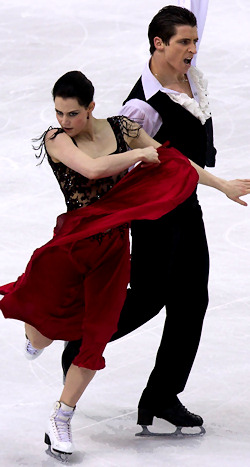 Tessa Virtue and Scott Moir perform a Spanish Flamenco for their Original Dance at the 2010 World Figure Skating Championships.

The golden quartet from Canton continued to remain unchallenged throughout the second phase of the event as both Tessa Virtue and Scott Moir (CAN) and Meryl Davis and Charlie White (USA) outscored their closest opponents by ten points to finish first and second in the original dance with new personal records.

Federica Faiella and Massimo Scali  (ITA) are third, after they edged Nathalie Pechalat and Fabian Bourzat  (FRA) on the strength of their interpretation.

Virtue and Moir, who were first to skate in the last warm-up group, delivered their Flamenco with the confidence of experienced performers who knew they had the audience in the palm of their hand from the very first move of the program.

The team stormed through the dance without ever taking a break to catch a breath, nailing both required elements and complex transitions with passion and precision. One judge awarded the Olympic Champions a perfect 10.0 for both choreography and interpretation of the dance, and the team received a level three only for their final non-touching midline step sequence. Their new record is now set at 70.27 (34.30/35.97) points and they have 114.40 points going into the Free Dance (FD).

“We love skating these programs,” said Moir. “That’s really been a help. We feel fortunate again to get to compete them, and we ought to show this again at least in the free dance.”

Moir regrets leaving their Original Dance behind. “I really love that program. It’s probably one of our favorites we’ve put together. We worked hard and we’re happy with where it took us this year obviously. We are looking forward to programs in the future, whatever is the future.”

“We knew that we were coming to the world championships so that wasn’t a question at the Olympics,” said Virtue when asked about if they were tired. “Sure we are tired but we could expect that. We got a great two weeks of training after the Olympics and I think we just even progressed further.”

In contrast to the intense performance by their training mates, Davis and White were playful and exuberant throughout their Indian folk dance which never fails to elicit a strong response from the audience. The team also picked up two perfect scores, but in their case two different judges had decided that their interpretation/timing could not have possibly been better, and in truth, it could hardly have been. With every move, down to the small finger gestures during the side-by-side step sequence stylized to match the character of the dance, their performance in Turin was as good as it gets for  an adaptation of folk tradition to the ice.

Davis and White earned all level fours for their elements, but a slightly lower grade of execution (GOE) kept them behind the Canadian team. Their new best is 69.29 (34.10/35.19) points and they are two points behind Virtue and Moir going into the FD (112.54).

“It was a good performance for us today,” said Davis. “It’s a pleasure and it was very special for us for this last performance of the Original Dance in this season to be good. But we are not saying goodbye to it yet, we’ll be doing it forty more times on tour.”

“I think we improved a little bit,” added White, comparing the performance in Turin and Vancouver. “We talked about using the Olympics as an experience that will help us improve us as skaters and performers, and I think we just moved to that. We stepped it up a little bit as we did all we could, and obviously this is our season’s best and we are very pleased. Definitely this is one of my favorite programs.”

The only other couple to have the same level of the authenticity as the two North American couples were the home crowd favorites Faiella and Scali. Their Tarantella has been warmly received in all the countries in which they performed it, but the level of public support they enjoyed at home was closer to the one at soccer games than at figure skating competitions.

In addition to excellent interpretation of the theme and perfect expression of the national character, the Italians started the dance with strong technical elements, but Scali later stepped out of a twizzle and the sequence was downgraded to level one and received negative GOE. The team earned 59.16 (27.90/31.26) points to finish third in this portion of the event thanks to their high program components score, and received their first medals of ISU Championships: small bronzes awarded to a team who place third going into the free dance.

“We made a mistake on the twizzle because we got too close to each other,” explained Scali. “We tried all the time to improve and to do better, but this time we exaggerated and our bodies got too close. It is difficult to control the pressure with such a fantastic audience, but we have to learn to transform it into positive energy.”

“It was not easy because we knew that we had to do our best for us and for the crowd,” added Faiella. “Furthermore, we are at the end of the season. Tomorrow we will train very early and will try to do better. We are supported by an amazing audience here in Palavela and this is an extraordinary power.”

Pechalat and Bourzat, who skated right after their rivals, failed to capitalize on their technical mistake as Bourzat committed a nearly identical one on their series of synchronized twizzles. However, since he managed to complete more rotations before the mistake, it received level two which allowed them to earn more points for the technical score. Their upbeat and entertaining country routine was funny and well performed, but the French did not seem to be quite as connected to their characters as the teams that placed ahead of them, and the choreography of the dance was not as tightly woven. The students of Alexander Zhulin earned 58.55 (28.60/29.95) points for the dance and have 96.30 points in total.

“It’s one of these things,” said Bourzat about mistake on the twizzle. “It just happened. I didn’t miss one twizzle all week I think, and in practice since the Olympics, I think I might have missed one out of five. It was the last Original Dance of the season and we wanted to finish with a good performance.”

“The error was costly,” agreed Pechalat. “It’s too bad. We would have had a chance to overtake the Italians. The rest of the program went well, we had some good levels. I think we got a level four for the midline footwork for the first time this year.”

Great Britain’s Sinead Kerr and John Kerr, who has been performing a country dance all season, opted  to bring back their Scottish dance from two season ago for the final event of the year. The change did not affect their overall standings very much as the students of Evgeni Platov are still handicapped by their relative lack of precision and accuracy compared to other top couples. However,  the team was obviously very comfortable with the dance which they had been using as an exhibition piece recently. The familiar dance highlights their best qualities very well, and both the skaters and the Italian public certainly enjoyed it. They earned 58.23   (28.60/29.63), and with 95.79 points total, they still have an outside chance to win a bronze medal tomorrow.

“Last time we did this in competition was at 2008 Worlds,” said John Kerr, “so it was nice to do it one more time competitively It was a lot of fun for us. I think what made it easier was that we performed it in exhibitions over the last year or so. That made it easier to come back to it. Noticeably, we had to adjust it to make it more like a competitive routine, but I think we were able to do a pretty good job with that.”

Alexander Zaretski and Roman Zaretski of Israel, who also skated to their native tune Hava Nagila, pulled up one spot with a flawless performance. The couple easily slipped into  their slightly larger-than-life Jewish characters, and maintained the expression throughout all the elements to get a new personal best of 56.13  (28.60/27.53) for the dance and 89.92 points in total.

“I’m glad that this is the last performance of the Original Dance,” said Roman. “We got a little tired of it. It has been a long season. It felt easy to skate, and emotionally it was very good. The twizzle was a bit off, but a lot of people had trouble with the twizzles today.”

“The Original Dance is hard to do,” confessed Alexandra. “It’s two minutes and 50 seconds and the elements come one after the next. You cannot relax for a single second. You cannot relax in the Free Dance either, but there are few calmer moments.”

Like their teammates Virtue and Moir, Vanessa Crone and Paul Poirier also used a Spanish dance for the season. The Canadian silver medalists have made a lot of progress in their interpretation of the theme compared to their autumn competitions, and was able to strike a nice balance between the outward expression of passion and internal intensity required by the dance. Dressed in solemn black outfits, the young  team appeared mature and comfortable on the ice, and their technical score was the fourth highest of the night. They received 55.76 (29.20/25.56) points and pulled up one spot to finish eight overall with 89.07 points.

“We chose this music because we like to experiment,” explained Poirier. “We had a lot of fun. I think that Spanish music in general is good music for skating.”

“For sure this was the best performance of the season,” added Crone. “I’m happy because we did all the elements we wanted to do. That’s a big things for us and I really feel satisfied with how we skated today.”

Russia’s Jana Khokhlova and Sergei Novitski  slipped to sixth place overall after finishing only ninth in the OD. The Russian couple made costly mistakes on twizzles and the circular step sequence, which were downgraded to level three and two, respectively.

“There was a serious mistake, and our circular step sequence was almost without a section, so the result was obvious,” said Khokhlova. “The other thing is that even if there won’t be any mistake, the situation would not change noticeably. Maybe we wanted to show that we are better than that too much.”

In contrast, their teammates Ekaterina Bobrova and Dmitri Soloviev pulled up from 11th to ninth place after posting the third highest technical score of the night. Their “Sailor Dance” routine was well received by both the audience and the judges, and the skaters finally were able to deliver all required elements without mistakes.

“This is the first time in our lives when we’ve got all levels four! And on the Senior World Championships!” exclaimed Soloviev. “We were practicing very hard before the Worlds, so it would be really disappointing if it wouldn’t work out. We did not have clean performances all season, so we are very happy that it happened here by the end of the season. We would like to break into the top ten at the Championships.”