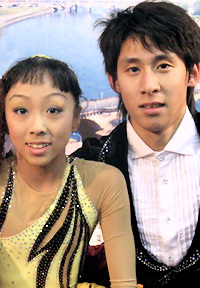 Wenjing Sui and Cong Han became the second Chinese pair team to win the ISU World Junior Figure Skating Championships since Dan Zhang and Hao Zhang won the title in both 2001 and 2003.

In the past decade, China has become a pair skating  powerhouse  with the likes of Xue Shen and Hongbo Zhao, Qing Pang and Jian  Tong, and Dan Zhang and Hao Zhang. Between them, these three teams have won five Olympic medals  since 2002, and have improved their results with each Olympic cycle. Most recently,  Shen and Zhao claimed China’s first Olympic figure skating gold  in Vancouver, while Pang and Tong took the silver and  went on to earn their second world title in Torino last month.

However,  behind these three top teams there was a significant gap. The younger pairs  were not able to follow up with stellar results yet. They won a few medals at  Junior Worlds and in the Junior Grand Prix, but none of them looked like they could really replace the older generation of champions.

Right in time with the retirement of the stars on the horizon, however, the newest  product of the Chinese pair skating school made an impact on the junior scene.  Competing in their first international season, Wenjing Sui and Cong Han won their  two Junior Grand Prix events, the Junior Grand Prix Final, and  the Junior  World title. Each time, they were the clear leaders of the field. They could  become the Chinese pair that follows in the footsteps of the masters. At least  this is what they plan themselves.

“We were deeply impressed at the Olympic  Games by the performances of Xue Shen and Hongbo Zhao, but in 2014 we want to  be Olympic Champions ourselves,” Sui said boldly. Her partner was quick to tone  it down a little. “She wants to say that we want to give our best and want to  get close to the top,” he added, “but we’d like to compete in four Olympic Games.”

Who are  these two newcomers and how did they rise so quickly to the top at the junior  level? Sui and Han are both from Harbin. This big city with its long and  freezing cold winters is still the origin of Chinese figure skating, although  there are now skating schools in Beijing and Shenzhen in the south. The  top three pairs also came from Harbin, and only later moved to the  capital following their coach Bin Yao.

Bin Yao’s former pairs partner Bo Luan is  still coaching in Harbin, but she wasn’t really in the  limelight. A few years ago she was coaching Yang Ding and Zhongfei Ren. This couple  won a bronze and a silver at Junior Worlds in 2002 and 2003, but they never got  past the “big three” couples and retired in 2004. Ding and Ren were already trying  the quad throw toeloop in competition, but none was ever ratified as clean in  ISU events.

Bo Luan now  had the idea to form a new pairs team with the tiny Sui who stands 4 ft. 7 in. tall, and  Han, who is a foot taller. They teamed up in 2007. Neither of them have skated with another partner before, and thus no pair skating experience. They were both  single skaters.

“I’ve watched Shen and Zhao in 2002 at the Olympic Winter Games  on TV and I asked my mother if I could start skating as well,” Sui recalled. “I  also knew Shen and Zhao from TV and I watched their great performances,” Cong  added. “Watching them I got so many positive emotions that I wanted to do the  same.”

So both got involved in figure skating and were happy to do the switch  to pairs. After all, pairs is the most prestigious discipline in China, and Shen and Zhao were their idols  anyway.

Before  starting to skate together, Sui and Han didn’t know each other as they had  trained in different groups. The switch to pairs wasn’t too easy.

“It was very  hard at the beginning,” Han admitted. “We started slowly. We did everything  step by step.”

However,  the small Sui wasn’t afraid at all of the sometimes risky  and dangerous pair skating elements, such as the throws and lifts, although  they were new for her. “I’m not afraid of them,” she said with a shy smile.  Han, although not very tall, throws his delicate partner high and far.

It was only  a question of time until the young Chinese would go for a quad throw, and sure  enough, the throw quad Salchow was there at Junior Worlds in The Hague. Sui two-footed the landing, but stood up on  it. This was the first time the team  had risked this element in competition.

“The  quad throw Salchow is a very difficult element and we’ve slowly learned it with  the help of our coach,” the 17-year-old Han said. At Junior Worlds he was  especially proud of having done the throw quad successfully.

It is still  amazing how Sui and Han have progressed so fast. In three years, they’ve made it from beginning pair  skating  to Junior World Champions.

“There are three reasons for  that,” Han revealed. “First of all we have a very good, responsible coach.  Secondly, the Chinese Skating Association has improved our practice conditions,  and thirdly, my partner can take a lot.”

The young  athletes are solely focused on skating right now.   Sui, 14, isn’t attending a regular school, but has a private tutor so that she can adapt  her studying to the practice schedule. Han doesn’t go to school anymore, but he  is learning English and speaks it well enough to answer some questions in  English.

The skaters  get up at six in the morning and  train from 8:00 to 9:30, and in the afternoon  from 1:30 to 3:00. Additionally, they have off-ice training. Right now they do not  plan to move to Beijing as their families are in Harbin.

“In our spare time we do whatever  we like,” Han said. This includes listening to music, reading for both, plus  surfing the web for him.

Coach Luan  and choreographer Wei Zhang usually suggest the music for their programs, and  they were spot on this season. Both the lively Russian folk piece Barynia and  the cute Charlie Chaplin medley suited the team very well.

Sui and Han  just finished a great first international season, and now they are looking forward  to the future. They plan to do a new short program and want to keep their free  skating for next season. They haven’t decided yet whether they will check out the senior scene by  competing in the senior Grand Prix, or whether they will stick completely to juniors.  For ISU senior level championships, they will be too young in the upcoming  season as Wenjing Sui will only be 15 on July 18.