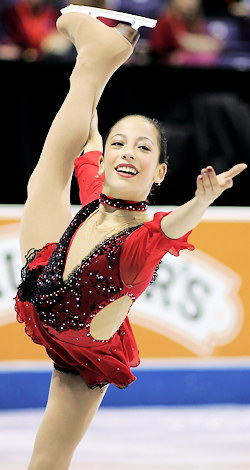 At the 2010 U.S. Figure Skating  Championships in Spokane, Wash., a group of pre-pubescent pixies stood  next to the boards peering out onto the ice waiting for their turn to  skate.  One skater was lucky to have been  wearing her skates, otherwise she would have had to wait until the gate opened  to see the ice on which she was about to compete.

Twelve-year-old Leah Keiser took to the ice  on that January afternoon, and commanded the ice in ways that more experienced  skaters should one day hope to achieve.   Along the way, Keiser earned the title of U.S. Novice Ladies  Champion.

“Winning  the Novice title in Spokane  was amazing,” Keiser said with her trademark bright smile. “[It] meant a lot to me and to my family. We have  sacrificed a lot for my skating.”

But Keiser is not new at winning national championships.  This is her second.  Before missing the Junior National  Championships on the Intermediate level in 2009, the seventh grader at Placentia Yorba Linda School District  won the Juvenile Girls title in 2008.

After a year away from the national stage, Keiser went back to the  training rink more determined than ever.   But things didn’t come as easy as she would have hoped.

“After the 2009 season, my goal was to get all my triples,” Keiser  remembered.  “I put all my triples in the  first competition of the 2010 season, which was the All Year Figure Skating  Competition in early June. I only got credit for my triple Salchows.”

Keiser finished in third place at that competition with a total  score of about forty points less than her total at the National  Championships.  After that competition,  Keiser worked to clean up her triple jumps, and they started to come together  just before the Southwest Pacific Regional Championships.  She finished in second place, and advanced to  the Pacific Coast Sectionals where she won the bronze medal.

By the time Spokane  rolled around, Keiser landed five triple jumps, including two Lutzes, to propel  her to the title and the second highest novice ladies score at the U.S.  Championships since the 6.0 system was put out to pasture.

Keiser began skating in her native Pittsburgh, Pa.,  at the age of four as she needed an outlet to burn off her excess  energy.  Keiser’s mother, Betty, asked  what sport she would like to try, and like many young American girls, Keiser decided  that she wanted to skate after watching the legendary Michelle Kwan.

Olympian Caryn Kadavy, traveled from her home in Erie,  Pa., to Pittsburgh  to train Keiser in her beginning years, but was limited in the time she could  commit to the young skater due to skating commitments of her own.  So, after a difficult time at a regional  championship, Keiser’s parents thought it time to make some tough decisions.

“Leah would spend most of her time practicing on her own, even  though [Kadavy] was always available by phone,” mom Betty recalled.  “After Leah’s first disappointing regionals,  my husband and I tried to persuade her to do different sports.  She cried and tried to convince us to give  her one year to skate in a place where she could get routine training.  She was so persistent that my husband and I  finally gave in.”

So with Kadavy’s blessing, the Keisers decided that Betty, Leah,  and ten-year-old sister Emily would move to California to train.  Keiser’s father, Thomas, was left behind to  tend to the homestead in Pittsburgh,  and to continue his work with a financial investment company in order to  support the family.

“She won the Juvenile title that year,” Betty said proudly.

But the move wasn’t easy for the Keisers, and the original plan was for the relocation to be temporary.

“We  came to California  with two suitcases four years ago, planning to stay for a short time.  We  started by renting a place on weekly basis,” Betty explained.  “In four  years, we had moved five times for various reasons, but during it all, Leah’s  drive and motivation never worn off.  She works hard and keeps herself  motivated everyday.”

Thomas is also the one who does most of the traveling to keep the family in tact.  Weekend visits twice monthly and holidays is  what the family lives for these days.

“He  stays close to me and the girls by talking to us on the phone many times a  day,” Betty chuckled.

And Emily, also a figure skater, is flourishing in her adopted  training environment as well.

“Emily  has competed at Junior Nationals before and she will likely compete at  intermediate level this year,” Keiser said with pride.

Keiser also has three older half  siblings, all of whom have the athletic gene as well.  Keiser’s brother Thomas attends Stanford University  and plays on the football team, while her other brother, Alex, is on the rowing  team at Boston University.  A junior at Penn State University, Keiser’s sister Stephanie is  a tennis player.

This season Keiser has made some  huge changes to her skating life.  After  skating under the tutelage of Peter Oppegard last season, Keiser made the move to train with  Frank Carroll, coach of Olympic Champion Evan Lysacek.

“I like  training with [Carroll] because I feel really connect with him,” Keiser  admitted.  “I  didn’t really have a training plan before I started to train with him.”

Additionally, she has decided to  compete on the junior level this year, but will have to settle for competing at  local competitions in advance of the qualifying season.

“My  birthday is September 13, so I am not eligible for  Junior Grand Prix this year,” said Keiser, who is a little more than two months  shy of age qualification.  “I am a little disappointed, but I think it will  make me work even harder so that I can do well at Nationals next year.”

All of that disappointment has been channeled into Keiser’s  training.  Already this spring, she has  worked with choreographer Cindy Stuart to put together her long program, and  has also tasked Stuart with her “work in progress” short program as well.  Though Keiser was not willing to discuss the  specifics of her programs at this time, she did share some details.

“I have been working very hard on improving my second mark,” Keiser  said matter-of-factly. “[Carroll] spends a lot of time polishing my  skating.  I have a planned triple-triple combination in my long program,  and hopefully I can get it consistent enough to put in  competition.”

In addition to Carroll and Stuart, Keiser also works with Karen Kwan  and Alex Chang to fill her already tight on ice schedule.  Off ice, Keiser works with ballet instructor  Galina Barinova, a former prima ballerina with the Bolshoi Ballet, and Diana  Kovacic, who is charged with Keiser’s off-ice conditioning.

“I usually  skate early in the morning, take a break, and skate again in early afternoon,”  Keiser said of a typical day in her skating life. “I used to skate with Mirai  Nagasu, Michelle Kwan, and Mao Asada at different times.  I also skate  with many national level skaters everyday.  Skating with all these high  level skaters encourages me to train harder.”

When she isn’t training, or working on her math, social studies,  literature, or science homework, Keiser is just like any other kid.

“I like to read, ride my bike, and play outside,” said  Keiser, who carries a 4.0 average in school.  “I also enjoy playing in the  pool with my friends.”

In addition to collecting swans and penguins, Keiser also likes to  spend time with the family pets, Tinkerbelle, an apricot toy poodle, and Annie,  a puggle.  And when she finds time, Keiser  enjoys watching Dancing with the Stars, Suite Life on Deck, Wizards of Waverly Place, and Hannah Montana.

After her skating career concludes, which she hopes includes an  Olympic title; Keiser would like to become an archeologist or a scientist  because she finds both subjects very interesting.  Until then, she will work on achieving her  other goal in skating… “to bring skating to a whole new level”.