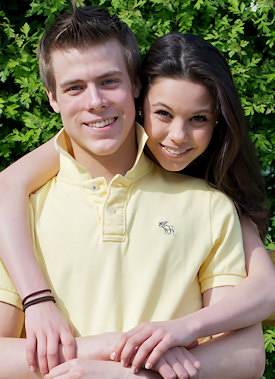 Elena Ilinykh and  Nikita Katsalapov are on the ice in the Russian  training base Novogorsk, polishing each movement of the hands and each turn of  the head with diligent patience. Coach Alexander Zhulin demonstrates a move,  choreographer Igor Orschuliak corrects a posture. The skaters repeat the pose  again and again, not tiring in their quest for perfection.

The 2010 World Junior Ice Dance Champions, caused a stir  when they won the title in their debut on the international junior scene. Not  only did they dominate the competition from the first step of the Compulsory  Dance, but  their free dance to Schindler’s List and Fiddler on the  Roof moved many spectators. As a matter of fact, the free dance was discussed at length and some people felt it was  not suitable  for the young team as theme was of “war” and “concentration camps” – complete with gunfire heard in the background.

However,  Ilinykh, who was 15 at the time of Junior Worlds, and 18-year-old  Katsalapov were able to interpret this music and the heartbreaking story very  well.

“I am a girl from the concentration camp, and  Nikita is like Oskar Schindler who tries to save me,” explained Ilinykh of their  dramatic dance. “But I realize that all my family and friends are dead and I  can’t live with that so I prefer to die. So I’m dying at the end of the  program because I cannot live with this feeling.”

At first the team was a bit concerned about taking on such a serious theme with powerful music. “Sascha (Alexander Zhulin) brought it to the ice and said,  ‘let’s try it’,” said Ilinykh. “When we started, we realized that this was us, that we can feel  this tragedy. We are ready and we understand what we are skating to and what we  project. It’s not just  beautiful music and a beautiful program. We saw the  movie, and this is world history, the war. I think that in the concentration  camps were children, young people…they all experienced it, and not only grown  ups,” she noted.

After Junior Worlds in March, the couple had  four days off, as Katsalapov revealed, and then resumed training in Novogorsk,  not far from Moscow. The skaters live there in a boarding house and train four  hours a day on the ice together with Nathalie Pechalat and Fabian Bourzat from  France. Vacation is planned for June in Turkey, but till then, the team is working very hard. They are motivated because they plan to compete at the senior level  in the upcoming season.

“We have to learn this most difficult dance,  the Golden Waltz,” sighed Katsalapov. “We’ve been working on it for a month now, and we have still  so much work ahead of us.”

They also started to work on  their new free dance, but right now would only reveal that it is “something  completely different from what we’ve done,” according to Ilinykh. They picked a  classical theme. “We really like it,” Katsalapov said. “Sasha (Zhulin)  choreographed it, and it was his idea as well,” Ilinykh continued. The dancers  also want to work with choreographers Liudmila Vlasova and Igor Orshuliak.

However, this month the team rehearsed Schindler’s List again as they  performed it in Zhulin’s show in Moscow.

In July, the group around coaches Zhulin and  Oleg Volkov will attend a training camp in France for one month before  returning to Russia. The coaches are very pleased with their students. “Their  soft gliding on the ice, the soft, good knee action [set them apart], and in my  opinion they are a couple full of artistry,” Zhulin noted. “They are very  artistic, both of them, and this is their tremendous quality. Plus, they have  the technique, so this is a couple with huge potential,” the coach summed up. He  feels that they are easy to work with and show the character of true champions.

Ilinykh and Katsalapov are excited about moving up  to seniors now. “I really want to skate at the senior level, to reach another  level and look at the couples that already stood on the Olympic podium,” said Katsalapov. “Me  too,” his partner added, “but I understand that we still have to work a lot because it is a whole  different level.” “It (competing in seniors) is a new  feeling and we still have to learn and to understand what it will be like,” Katsalapov noted. “We’ve never skated as seniors.”

The skaters feel that nothing  really has changed for them since winning junior worlds. “Only our desire to  work has grown, our ambition, our confidence,” Katsalapov explained.

On the other hand, they do feel the additional  responsibility, especially knowing that the two top Russian dance teams are gone.  Oksana Domnina and Maxim Shabalin are unlikely to return to competition as Shabalin  needs a minimum one-year-break to take care of his knee injury, and Jana  Khokhlova and Sergei Novitski split up as Novitski is dealing with injuries as well.

“Obviously, we feel the responsibility,” Ilinykh said, “but we just have to work and to justify.  Of course, as World Junior Champions, we have to go out on a high level in seniors  and we have to try to do the maximum.”

“There is no pressure,” added  Katsalapov. “At least we don’t feel  it now, maybe it will come. The responsibility is huge  just because we cannot stay at the same level. We need to grow and grow and  grow, towards our goal. Our goal is Sochi, of course, the Olympic Games at  home. This is wonderful and it is a huge responsibility.”

But before the 2014 Olympic Games, a lot of  other competitions will come. The dancers both love competing and traveling to  competitions all over the world and they can’t wait to meet Olympic Champions  Tessa Virtue and Scott Moir and Olympic silver medalists Meryl Davis and Charlie White.  Elena Ilinykh actually knows these two teams quite well as she has trained in  Marina Zueva’s and Igor Shpilband’s group for about two years. “I adore them.  They are great – as athletes as well as as people,” she pointed out. Ilinykh  spent her time in Shpilband’s camp alone without Katsalapov as the two had  separated at this time.

Ilinykh and Katsalapov first teamed up under the  guidance of World Champions Irina Lobatcheva and Ilia Averbukh, who started  coaching after retiring from skating in 2003. Before, Ilinykh and Katsalapov were quite  successful single skaters as children. However,  Katsalapov had trouble learning  a triple Lutz and flip, while Ilinykh’s coaches felt that she would be more  suitable for dance than for singles. So both switched to dance and were paired  by Lobatcheva and Averbukh. In 2005, they went to a training camp in the USA  with Alexander Zhulin who was preparing future Olympic Champions Tatiana  Navka and Roman Kostomarov for the Olympic season.

Although Ilinykh and Katsalapov felt very  inspired by training with Navka and Kostomarov under Zhulin, they split up shortly  after returning home from the training camp. “We were young,” explained Ilinykh. “We didn’t really understand what  a partnership meant. One didn’t understand the other, one  didn’t want to step back. Since then, I understand that you sometimes have to  take a step back and Nikita started to pay more attention to me.”

“When we just  teamed up, we were kids,” Ilinykh continued, “Not bad as single skaters when we were children, and both leaders. As a couple, we didn’t understand at all that you need to  talk to each other, to find a compromise. There were these foolish, stupid quarrels.  It just didn’t work.”

Ilinykh doesn’t regret the  split. “Quite the  opposite. I am glad that we split up at that time. When I sometimes think about  how we split up, I realize that in these two years that I skated without  Nikita, without a partner, I started to think through things. I understood how  to behave and how difficult it is to be without a partner. True, sometimes I’m  forgetting it,” she laughed.

While Ilinykh skated alone in the USA,  Katsalapov teamed up with Angelina Kabysheva. Right at the time when he split  up with her, Ilinykh came back from the USA, and they  decided to give  it another try. “We  started to skate and we tried every day, and everybody was saying, ‘yes, it’s  worth it’,” Katsalapov recalled. “They said you have to train. The parents as well, all together were  for it.”

And it worked. In their first season after  their reunification, the couple finished fourth at Russian Junior Nationals. In  the 2009-10 season, they debuted at the Junior Grand Prix, won their two events, went on to claim the silver medal at the Junior Grand Prix Final, and capped off the season with  gold at the 2010 World Junior Figure Skating Championships.

Both dancers are focusing on their sport, but  Ilinykh is home-schooled and Katsalapov is attending the sports university. In  their spare time, they pursue typical teenagers’ interests: They like to hang  out with friends, she loves to go shopping, going to the movies and traveling,  while he likes to play soccer but assures that he is careful about it.

When asked to describe each other in three  words, he thinks for a moment before answering: “Beautiful, intelligent and cheerful”. She laughed, “Can  I say the same? He truly is cheerful, beautiful and sexy!” For that,  he thanked her with a grin.

This young team has already garnered fans all  over the world who recognize their talent and were impressed by their  performances this past season. There is a reason for that. The fascination for  ice dance is obvious in everything they do on the ice. “I think when you skate a program,  the most important thing is to skate with your soul,” Katsalapov  said. “You need to put  your soul out so that everybody can see it, and that everybody wants to see the  program again and again, and that the program is over like in one second and  that you cannot take your eyes off the skaters.”

This is  exactly what they have already achieved last season, and chances are good that they  will do it again.