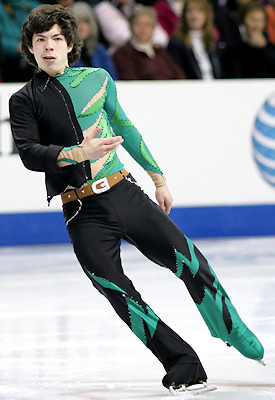 It’s hard to miss USA’s Keegan Messing at any competition in which he competes. The 2010 Junior Worlds fourth place finisher is just that kind of guy.  And though he is just a shade more than five feet tall, Messing often towers over the crowd. Whether he is performing tricks with his yoyo for impromptu audiences or  infecting skating fans with his own special brand of performance, the 18 year-old high school graduate just stands out.

“I’ve always loved to perform, to put on a show,” Messing said with his usual confidence. “I don’t know where that came from, it’s just part of who I am.”

And a show is always what the audience gets when Keegan competes. The Girdwood, Alaskan first made headlines as a fourteen-year-old at the 2007 U.S. Championships where he competed as a novice.  In the freeskate, seemingly out of nowhere and much to the delight of the audience, Messing attempted – and landed- a triple Axel jump.

“I really wanted to throw it in the competition,” Messing recently remembered about his bronze medal-winning program. My coach said he would let me go for it if I landed it in each of the warm-ups before the free skate.”

The next two seasons, Messing competed on the junior level at the U.S. Championships, finishing in 5th place in 2008, and winning the silver medal in 2009. In both seasons, he was assigned to compete on the Junior Grand Prix (JGP) circuit, and nearly made the Final in 2009. Last fall as a veteran, he was a pre-season favorite to earn a spot in the Final, but was nearly forced to end his career before he was truly able to get it started.

“My first assignment of the season was in Poland, and during practice another skater’s blade punctured my hamstring muscle as we collided,” Messing recalled. “Fortunately, it missed all the ligaments and tendons. U.S. Figure Skating’s team doctor who traveled with the team was amazing. He had me stitched and iced up and in bed within a couple of hours of the accident, which I think really helped the healing process.”

But like the warrior that he is, Messing refused to let the injury have the final word.

“I really wanted to skate,” he said with determination.”It’s not in me to withdraw. I bugged the doctor so much that he jokingly threatened to stitch me up without painkillers. When we found out that that competition counted as a skated event whether I skated in it or not, the doctor re-evaluated letting me skate.”

Stitches and all, Messing courageously finished the competition in sixth place, but his placement was not high enough to be rewarded with a second assignment which eliminated his hopes of qualifying for the Final in December.

The time off from international competition allowed Messing extra time to focus on healing and preparing for his debut on the senior level at the 2010 U.S. Figure Skating Championships in Spokane, Wash. With solid performances, Messing finished in the top ten, and was named as an alternate for the Junior World Championships.

“Skating in Spokane as my first senior nationals was incredible. The crowds there were so much fun to skate for,” Messing remembered with a smile on his face. “I didn’t skate clean, so I was bummed about that, but to still place that well in that field was great. I still had lots of room for improvement. I was bummed that I didn’t make the Junior Worlds team, but I was happy to have made the list of alternates.”

Within weeks Messing learned that due to an injury of another American skater, he was named to the team, and soon headed to The Hague for his first ISU Championship.

“I was bummed that the other skater was still hurt pretty badly, but then I was really excited about being able to go,” Messing said just before that competition. “Being called to go was really great.”

Messing ended up with the highest placement of any of the American men, fourth, and helped to solidify Team USA’s chances to earn multiple spots on this season’s JGP circuit. Though assignments have yet to be announced for the fall season, Messing has announced his intentions to U.S. Figure Skating in hopes of checking off one of his skating goals.

“I decided to stay junior internationally again this year to hopefully accomplish what I wanted last year, which was to make the Junior Grand Prix Final,” said a determined Messing.

For this season, Messing and his support team have created a new short program to music from the recent soundtrack Robin Hood, and will keep his popular The Incredible Hulk free skate for another season.  He worked with longtime choreographer Rory Flack Rollins on both programs, and plans to take a giant step forward this season.

“I have made some changes since last year,” Messing explained. “I have been working on my consistency over the summer. My goal is just to do clean programs with a quad and triple Axels.”

In order to step up to such a huge challenge, Messing has decided to continue to work with his long-time coach Ralph Burghart, and credits many people for helping him to maintain his confidence on the ice.

“(Burghart), my family, and my town of Girdwood have been so supportive of me,” Messing explained. “My mom always comes with me to competitions, and always knows what to say when my head gets in the way. She always gives the best hugs at just the right time. My dad helps to ensure skating isn’t my whole life. I really love going out and skiing with him. He’s the best on the mountain.”

Messing’s mother, Sally, is a staple at most of his competitions, and is employed as an Administrative Assistant at the ice rink where he trains. His father, Bob, is a firefighter and works ski patrol in Messing’s hometown. Messing also has two brothers, twenty-year-old Tanner and seventeen-year-old Paxon, who is a competitive snowboarder.

Messing graduated from high school in May, and has put his educational plans on hold for the time being to continue to chase his dream of skating in the 2014 Sochi Olympic Games.

“I work at Subway when my schedule can handle it. My supervisors are very supportive of my skating,” Messing said. “I love to go rock climbing and mountain biking in the summer, and downhill and back country skiing in the winter. I enjoy camping any time of the year.”

On those ski trips, Messing sometimes invites a special friend to share in his adventures. “We have a Pomeranian who loves the snow,” he laughed, “and she goes back country skiing with us.”

But his daredevil lifestyle comes at a cost, and Messing recalled a particularly memorable incident.

“My first major injury was a major concussion that I received when I over shot a ski jump by approximately twenty-five feet. I’m really glad my parents were very strict about us kids wearing helmets. I’ve had a couple of injuries that could have been career-threatening, but I have been very lucky.”

And of course, there is his much less dangerous passion for yo-yo, which has garnered Messing Jumbotron face time at last several U.S. Championships. “I have a hard time sitting still, so the yo-yoing keeps me occupied,” he admitted. “The tricks are difficult enough to keep me challenged.”

Messing, who started skating at the age of three and a half, has trained almost wholly in Alaska his entire career.

“I skated at the Diamond Center in Anchorage for the first four years of my career,” Messing shared. “Alaska has been my main training location, but I have trained in St. Paul, Minn., when (Russian coach) Alexei Mishin had a training camp there. The only time I travel for training now is if my coach is doing seminars.”

The absence of other international level skaters at his training location does not concern Messing in the least.

“I haven’t trained with other guys at my level since I attended Mishin’s camps. My coach and I know tricks are expected at this level, so that’s what we train for,” he said rather confidently.

Messing trains two or three hours on ice five days a week, and has off-ice training and stretching classes with Gary Irving three times a week. The Alaska native also runs twice a week, and tries to go rock climbing with his younger brother every Friday night. “I throw a little mountain biking in there for fun, too,” he confessed.

The 2009 U.S. Junior silver medalist made his season debut at the Liberty Challenge last weekend in Aston, Penn., and impressed spectators and judges alike with his improved speed, choreography, and technical merit. In a strong field of senior men, Messing finished in second place in each phase of competition behind World silver medalist Patrick Chan.

Messing rotated a beautiful quadruple toe loop in the free skate, but was unable to hold onto the landing. He also attempted two triple Axels, landing one clean, but everything else looked stronger and more secure than in past seasons.

The large competitive field in Aston was Messing’s motivation for making the long trip. “Competitions are so expensive no matter where I go, so when I compete, I want to go where there will be lots of guys to compete against,” he said matter-of-factly.

And the Aston competition was just the first step of many in Messing’s plan of attack this season.

“I want to make the Junior Grand Prix Final, and medaling there would be sweet,” he explained.  Top five at U.S. Nationals would be really cool too, but there are so many fantastic senior skaters that just to skate there and skate clean would be amazing.”