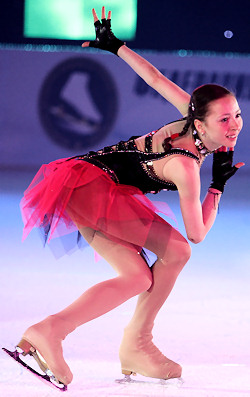 Polina Shelepen of Russia performs an exhibition routine to Ain't No Other Man by Christina Aguilera.

Those who have been watching the development of skating in Russia have seen a wave of strong new girls in the making. The first ones made an impact on the Junior Grand Prix (JGP) circuit this past season: three girls qualified for the Junior Grand Prix Final, and the three young skaters at the World Junior Figure Skating Championships placed three to five.

Polina Shelepen is part of this new wave. The Muscovite, who will turn 15 on July 28, debuted on the international junior scene this past season. She won her two JGP assignments last fall, then went on to claim silver in the Junior Final, and then came in fourth at Junior Worlds.

“I guess I can say that I fulfilled my plan to 50 percent,” Shelepen noted. “At the beginning of the season, I more or less did everything, then I wasn’t in top shape towards the end. I think I have grown again and needed some time to adjust. But I really like being at the big competitions and enjoyed the Junior Grand Prix,” she continued.

Growing is a real issue, as coach Eteri Tutberidze explained: “She grew a lot during the winter, and for some reason she is always growing during the winter, since she was little. She has grown overall 10 centimeters last winter, so obviously she had some coordination problems in March, and it was hard for her to push through the whole program. But she fought for it; at Junior Worlds she fought for each element in the free skating.” Shelepen was ranked third in the free skating after placing 7th in the short program.

For the next season, the skater and her coach would have liked to move up to the senior circuit, but she hasn’t been assigned to any senior events. “My goal is to basically do the same as I did last season,” Shelepen said. “We would have liked to move up to seniors in order to save time,” Tutberidze commented. “Polina’s job isn’t so much to achieve certain placements, but to improve her overall skating. It is a process. The placements now aren’t so important. It is important where we will finish in figure skating in ten or more years.”

Shelepen agreed that she is focusing on stroking and skating skills. “But I can’t say that there is something that we don’t work on,” she added. “You have to work on everything! We are polishing the footwork, the stroking, the landing of the jumps, and new spins,” the skater explained.

Both skater and coach acknowledge that jumps are Shelepen’s strength, but she has no real favorite jump. “I like all jumps. You cannot afford to dislike something,” Shelepen said. “The jump that worked out is her favorite,” Tutberidze added dryly. Shelepen’s first triple was the Salchow that she learned when she was 11, and one year later she was already landing triple-triple combinations. “She did the (triple) Salchow when she was 11 and exactly one month later she was doing all the other triples,” Tutberidze recalled. “At the end of that season (back then) she had already landed triple-triple combinations. The following season, when she was 12, she already had combinations like the flip-loop. She is a hard-working girl and learned the jumps very quickly.”

Shelepen’s talent for jumping showed early. Tutberidze remembered a funny story from the beginning of her student’s career. “At her first competition, she was six years old, she did all doubles. She finished first and we had to show her birth certificate. They were saying, ‘that’s not possible, it’s not true that a six-year-old girl can do all the doubles’. Her mother came and showed her passport with Polina’s date of birth, but they still didn’t really believe it.”

Shelepen started skating at age four-and-a-half and Tutberidze is her first and only coach. The coach noticed her first for her unselfconsciousness. While Tutberidze pointed out Shelepen’s jumping ability and willingness to work hard as her strength, she named crying as her weakness. “When something doesn’t work out she is crying a lot. She always did that, even when she was little. She doesn’t stop the program, but she starts to cry. I’ve told her so often that she can’t do that.” Shelepen also cried after finishing second in the Junior Final, but not because of the result. “I could have skated better,” the ambitious girl explained.

The skaters she looks up to are Olympic Champion Yu-Na Kim and World Champion Daisuke Takahashi. “I really like how they are skating. As for Yu-Na Kim, I love her high, big jumps and her choreography. The same goes for Takahashi. This past season I especially enjoyed his short program, the Tango,” the Russian said. For her own programs, she is also looking for something new and different.

“It is not interesting for me to skate to music that a lot of others have used before,” Shelepen explained. For her new short program, she picked a modern version of Swan Lake. “I also really liked Takahashi’s Swan Lake (in 2008),” she added. “If Polina shows all the accents of her new short program, I really like it,” Tutberidze said. “It is a different style, something surprising. Some people say she can’t interpret it, but I don’t agree. I think that Polina is a very versatile girl.” For the free skating, the skater and coach chose an arrangement of Russian folk music. The short program was choreographed by show skater Igor Liutikov, and Tutberidze herself choreographed the long program.

They both appreciate the ISU judging system as they feel it is fairer to the athletes. “It is an advantage for me and I was really happy when it was implemented,” Shelepen noted. Tutberidze credits the Code of Points system for pushing the girls to learn triple-triple combinations. “When Polina came up, everybody wondered how an 11-year-old girl can do all the triples, but now it doesn’t surprise anyone anymore. Now the 11-year-olds not only do triples, but triple-triple combinations, and I think it is the judging system that triggered this development,” the coach said. But she criticized the new rules that punish cheated jumps less severely than before.

Off the ice, Shelepen enjoys theatre, music and just relaxing at home or going out with her friends on the lone free day in the week, which is Saturday. She is attending an evening school in order to be able to study in spite of her training during the day. Getting into that school wasn’t too easy as usually only working adults are accepted. But the school made an exception for the athlete, and so she is studying together with grown-ups from six to nine at night.

“It’s fine, and the director is very supportive,” Shelepen said. She added that algebra is her favorite subject, which prompted her coach to say, laughing: “Yes, and during the program she is always doing algebra in her head, thinking where to put the jump that she left out!” During the day, Shelepen has two practice sessions of one-and-a-half to two hours on the ice and off ice training in between and then heads to school. She lives rather far from the ice rink and has no time to go home in between the sessions.

However, right now Shelepen has a little more time for herself as she is taking a break from training. “She experiences pain in her knees due to growing and needs to rest,” the coach explained. Originally, Tutberidze and Shelepen were planning to attend the first two events of the Junior series, but might need to postpone the start of their season depending on how long the skater will be off the ice. Shelepen hopes to be ready in time. Skating is the life of this determined girl.

Asked what three things she would take to an isolated island, she answers without hesitating: “An ice machine, my skates and costumes.”