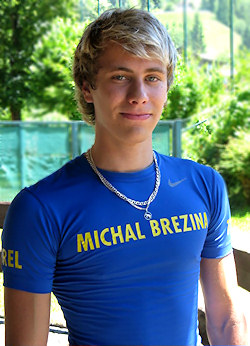 Michal Březina of the Czech Republic has a cool, realistic approach to his sport that helps him to focus and to reach his goals.

Michal Březina definitely can’t complain about his first full senior-level season. After finishing fourth at Europeans and Worlds, as well as 10th at the Olympic Winter Games in Vancouver and taking the bronze medal in the first senior Grand Prix event of his career, the Czech is regarded as one of the most promising up and coming young skaters. He looks to be a top candidate for the international podiums this season, and has worked hard over the summer to realize his dreams. He is not resting on his laurels.

“It was definitely the best season I had so far,” the 20-year-old said. “I had a medal from the Grand Prix and won the National Championship. Every one of the big competitions was great. I skated well. I just can be happy. This season I just want to prove that the results that I did last season was not just like, I came, I skated, I got it and next season it’s not going to happen again. I want to prove that it can happen again or maybe even be better.”

During the summer, Březina mostly trained in Oberstdorf, Germany, with coach Karel Fajfr and also in his hometown of Brno with coach Peter Starec, as he had in the past years. However, for the first time he worked with Pasquale Camerlengo, who choreographed his new short program to Japanese music.

“The short program is brand new, it’s Japanese drums called Kodo. We did it because Worlds this season is in Tokyo. I hope the Japanese fans will like it and the judges will like it, because it is their national music. That was the point,” the athlete explained. He enjoyed testing a different style. “I like it. Everyone who saw the short so far said that it is much better than the shorts I had before. I hope the judges will like it, too. It’s really good. It’s not the kind of music that you just  follow. You go and you do exactly the thing that the choreographer tells you. You really have to go precisely with the beat, which is good for me.”

Working with Camerlengo was a positive experience for the Czech. “It was really nice, because he was different from what I was used to. It was really good to work with him, and I hope I will work with him longer, because I like what he is doing. I actually chose him because of Daisuke’s (Takahashi’s) free program, because it was brilliant,” he revealed.

Březina decided to keep his long program to An American in Paris, but will polish it and make changes according to the new rules. “We have to do the new steps and we’ll put different jumps in the first half and in the second half,” he said. “We have to do the step (choreographed step) which is the most important thing. The rest will just be moves between the jumps and some transitions, which is not so hard. It’s easier to create than the steps. So we need to do the steps and put some more moves into the program, because last year everybody told me it’s good, but it’s a little bit too less. So we have to do more for the components, the transitions, that’s all. And the rest is up to me, I have to jump, and I have to skate,” he added, smiling.

Březina admitted that he doesn’t care too much about the new “choreographed” step that gets points  through the Grades of Execution (GOE) and doesn’t have a level of difficulty. “I just have to do it. That’s all,” he shrugged. “It will be easier, because you’ll get exactly the points (the base value), so you don’t have to worry what do to there – you just have to worry about the first step sequence.” He doesn’t believe that it means more freedom. “You have to do the steps anyway, and it has to be nice, because you’ll get the pluses from the judges. The step for the GOE actually must be better than the step for the level,” he laughed. “There must be more moves, because the judges don’t care about the edges so much, they care for the moves.”

The 2009 World Junior silver medalist plans to start his season at the Nebelhorn Trophy in his training town Oberstdorf at the end of September. It is his traditional kick-off event. He has competed three times in the event since 2007, and stood on the podium each time: He won in 2007, came second in 2008, and was third in 2009. “It’s the first competition of the season and it’s basically not to earn points or to do something special. It’s just to go through the programs in competition, see if the judges like it, and just test what my ability to jump the quad in competition will be, because this year we’ll probably do two quads in the program,” Březina noted.

He is not only referring to the long program. “In the short program right now we have two,” Březina revealed. “I go for quad toe-triple toe combination and quad Salchow from the steps, and triple Axel. We’ll see how they will be in practice. If they are good, there is no point in not trying. I can try it. If it will be good, it’s perfect, because if you jump everything, if you do all the levels… right now I have (a personal best of) 81 in the short, and the best first mark I got was 45, and there was no quad and no two quads. If I can do two quads, it can be like 60 points in the first mark if everything else will be done. And then if I get 35, 40 (for components), it will still be more than I had this past season. We’ll see. I probably will not beat the 100 points, but it’s getting close,” he calculated.

The quads actually looked good in practice in the past season, but in the end, Březina decided not to risk them in competition. “Well, I didn’t, my coaches did!” he was quick to point out. “What can I do? My coaches decided not to go for the quad, but it was a good decision. We just went for a clean program which was, I think, better than to risk the quad. Even though it was good, I did two in the warm up (at Worlds), I did basically all I went for. I was a little bit sad about not trying it (in competition), but what can I do? They (the coaches) are bigger.”

The 20-year-old has a cool, realistic approach to his sport that helps him to focus and to reach his goals. Asked about if he is excited to begin the new season, he shrugged. “Not really. It’s just work, it’s not exciting.” He has been selected to compete at the Grand Prix events in China and Paris, but is a little sad that he didn’t get the one in Japan. “I wanted  to go to Japan, because we chose this music and I wanted to see what the Japanese fans and the judges will think about it,” Březina explained. However, he comforted himself with the fact that China is close to Japan and that many Japanese fans will travel there.

One of his goals is obviously to make the Grand Prix Final after being a substitute in the past year.
Another goal is reaching the podium at least at Europeans. Although Březina stepped out of the shadow of teammate Tomáš Verner, the 2008 European Champion, in the past season, beating him in each event they met, he is still looking up to him and shows a lot of respect. “I’m trying to skate what I know I can do in practice. This is all what I did in competition. It was just bad luck for him (Verner) that he didn’t skate well in competition. I’m sure if he skated like he did at the beginning of the season, it would have been much better for him. It was just a bad season for him. I hope it won’t happen again, because he is a good skater,” Březina stressed. “I like to have him at the top, because that’s even better for both of us, because we can compete against each other and we can get better. I hope he will get better now and then we’ll see. It could help me and him. We could get two medals at Europeans, maybe at Worlds. It would be really great, because we never had two men on the podium. That’s a goal.”