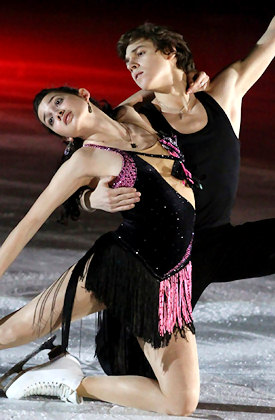 Russia’s Ksenia Monko and Kirill Khaliavin had a real break-through season this past year. They won their two Junior Grand Prix (JGP) events, the JGP Final, and earned the bronze medal at Junior Worlds. The year before, they didn’t even make it to the Final, let alone to Junior Worlds, as competition in ice dance in Russia is very tough.

“We had some bad luck,” Khaliavin said, recalling the fact that at their JGP event in Ostrava in 2008 a lift was deemed illegal. It cost them a lot of points and they finished a disappointing fifth. “But the 2009-10 season went so well for us, we never would have thought that we would win the Junior Final in our debut.”

Monko was actually following a kind of family tradition with this win as her sister Maria, two years her senior, struck gold as well in her first and only Junior Grand Prix Final in 2007.

So it is rather obvious how Ksenia Monko got involved in the sport. “Yes, exactly, my sister skated!” she laughed, “and so skated I. At first I didn’t want to, but then I saw how she was skating, how it worked and I got interested, too.”

Maria Monko retired from competitive skating in 2008 and is now studying and coaching part-time.

Khaliavin seemed to have slipped into skating by accident. “I just started skating in the kindergarten,” he shrugged. “It was part of the program for everyone. I don’t know why. Then I was sent to another group with older kids. They skated better than I did, but I started to catch up slowly.” Apparently a coach had noticed the talented boy.

Both partners switched early to ice dance. “I did singles for one year, then I lost interest in that and they suggested me to go into dance,” explained Monko. “I skated singles from four to five, and doing ice dance since I was five.” She felt attracted to dance, because “you don’t have to jump,” she smiled.

“I skated singles until I was eight years old for about four year,” offered Khaliavin, “then I went into dance, but again, I don’t know why. It just happened that way. The coaches decided about it, I guess.” But he was happy with their decision. “For me, ice dance is more pure skating. This is what I liked most of all about it.”

Both went through a couple of partners before teaming up ten years ago. “I had four partners or so, but it was only for a short time,” said Monko. “There was only one partner I skated longer with for about a year. Then he retired and I was teamed up with other boys, but nothing really worked out. Finally I teamed up with Kirill.”

It was a similar scenario for Khaliavin. “I also had like three or four other partners, but we never skated for a long time together… only for a month or so.”

Once they teamed up in 2000, it turned out they were a good match. They said they never thought about splitting and they get along very well. “The best partner!” Monko answered when asked to describe Khaliavin in three words. “He is demanding, very much demanding, he is patient and cheerful,” she elaborated. “Cheerful, cheerful and again cheerful,” he said about her, laughing.  “Ksjuscha is very talented, expressive and..” – “Cheerful!,” she interrupted him. “Very patient, and yes, cheerful. That’s it,” he continued.

When they happen to quarrel, it is about skating related issues. “But in real life we don’t quarrel,” Monko pointed out. “We spent our free time not always together, but sometimes we do. Obviously, sometimes we are fed up with each other and each of us just wants to go in a different direction and not see each other. But sometimes all of us, the whole (training) group is going to the movies, going out together,” she added. Other off-ice activities include studying. Monko is in her first year at the sports university and will start the second year this fall, while Khaliavin will enter the fourth year at the sports university.

The couple is training in Moscow with head coach Elena Kustarova, Svetlana Alexeeva and their long-time coach Olga Riabinina, but they are actually from Kirov, the same city that Oksana Domnina once came from. Together with their original coach, Monko and Khaliavin moved to Moscow in spring 2009 and credit the better practice conditions and the additional coaches for their success this past season. The move was smooth for them.

“We adapted quickly, because we already got used to moving,” explained Monko. “We first moved from Kirov to Rostov before going to Moscow. To move to Moscow then was already easier, and the group there welcomed us warmly. It was really nice. They are very nice, well-wishing people.” However, as housing is extremely expensive in Moscow, the skating federation for now is renting two rooms for them in a hotel.

Usually the coaches choose the music for the dancers. Last season they opted for a Ukrainian dance. “Because I’m half Ukrainian,” offered Monko. The free dance (a Blues program) was the decision of our coaches,” she added. “We didn’t know what kind of program we would have, and the coaches just came and said, ‘this is your music’, but we liked it.” What would have been if they hadn’t liked it? Khaliavin grinned mischievously: “We would have skated badly and they would have changed it.”

This season, the team has selected Padam by Edith Piaf for the short dance, and music from the soundtrack Frida for the free dance, which again was a suggestion of their coaches that they liked. The programs were choreographed by Kustarova with the assistance of Riabinina. The team had some time off in May and started preparing for the season at a summer camp in Latvia in June. Now they are back in Moscow. “In addition to the normal training process that includes working on the choreography and physical shape, we got the help of an acrobat to learn new lifts,” explained Khaliavin.

At ages 18 and 19 respectively, Monko and Khaliavin are eligible to skate at the junior level one more season and will do so. “It would be interesting to skate at the senior level, but I prefer to stay in juniors one more year,” Khaliavin explained. “Now, the rating (ISU world ranking) plays an important role in seniors and the higher your rating is, the better it is for you. So before moving up to seniors I think it is not vain to remain in juniors for now.”

Both skaters are following the development of their sport with interest and like the new lifts and elements that the couples are creating, but they also have some criticism. “I don’t like that dance becomes very acrobatic,” stated Monko. “So if ice dance used to be dance, it’s getting closer to pair skating now with all these acrobatic lifts. The rules set a strict frame that you cannot leave.”

Both skaters look up to Olympic Champions Tessa Virtue and Scott Moir and 2008 World Champions Isabelle Delobel and Olivier Schoenfelder. “At these Olympic Games, I really liked Scott (Moir) and Tessa (Virtue), of course, but I preferred their original dance over their free dance,” Monko said. “I also liked the French Isabelle Delobel and Olivier Schoenfelder. Their skating is very soft, and they did everything, all the elements, in a very exact manner. They were always thinking of something new and interesting.”

Khaliavin agreed. “Tessa and Scott are really good. They have just beautiful dances. It’s not only powerful or technically strong, it is just beautiful. I also like Delobel and Schoenfelder very much. They were very strong and they skated for a very long time. There is a little bit I like from everybody, so I probably can’t single out someone as my big idol. We try to take something from everyone and add something of our own,” he continued and added that he also enjoyed watching a lot of the junior teams last season.

As a young couple, Monko and Khaliavin are still developing, but they feel they have already found their style. “We probably have more a kind of dance-like style. Our coaches are looking for programs that are more going into the direction of dance, so this is where our style is coming from. If we had other kinds of programs, our style would be more aggressive, but the way it is right now, it is a more dance-like style,” Khaliavin noted.

The couple plans to compete at the Junior Grand Prix events in Romania and in Great Britain. “We are setting maximal goals for ourselves,” Khaliavin said. “We want to win everything and we want to achieve everything that we didn’t achieve in the past season.”