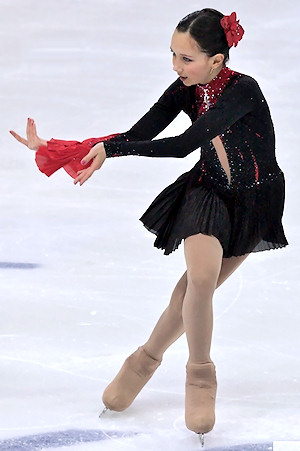 She doesn’t like to be called a wunderkind, but  Elizaveta (“Lisa”) Tuktamysheva is for sure a skating prodigy. As a tiny 11-year-old, she competed at the Russian National Figure Skating Championships in 2008 (senior level), and achieved the highest technical score of the field in the free skating.

In 2009, Tuktamysheva won the silver and in 2010 she took the bronze medal at senior Nationals, but still was too young to even compete at the international junior level. Her only international appearance dates back to the Coupe de Nice in the fall of 2007 where she easily dominated the Novice event. Finally, the now 13-year-old will hit the Junior Grand Prix this season, and a lot of skating fans are waiting impatiently to see this talented girl compete.

It all started not so long ago in Glazov, a city in the Russian province of Udmurtia, about 1100 kilometers east of Moscow. At age four-and-a half, little Lisa was lured into figure skating by other girls that she had met during a summer vacation camp. The daughter of a school teacher took up the sport and felt at home on the ice right away.

Tuktamysheva soon started to attend some national competitions. Four years ago, she went to Belgorod and famous coach Alexei Mishin noticed the girl.

“But at that time her technique was so incomplete and she jumped in such a strange way that I was consulting with my wife and we decided not to invite her in our group,” Mishin recalled. “Three years ago I saw her again and I observed her unique ability to jump high. Then we decided to take her into our group.”

“When I saw Lisa in Belgorod, I suggested her coach Svetlana Veretennikova to work together with Lisa. She accepted this suggestion readily,” said Mishin.

“I’m now one to one-and-a-half weeks each month in St. Petersburg,” Tuktamysheva explained. “It is a 27-hour trip by train from Glazov to St. Petersburg. It was hard in the beginning, but now I’m used to it and I’m relaxing on the train.”

The skater is attending private classes as she cannot combine her training schedule with regular school.

“My mom is a teacher for algebra and geometrics, and she is my class teacher, and this is helping me a lot,” the athlete smiled. “All teachers know that I’m traveling a lot, and if I’m not prepared, it’s because I just came back and they give me a break.”

Tuktamysheva’s dad was a skier in his youth and now is now coaching soccer. Her younger sister Evgenia (6) has taken up skating as well.

“At first our dad didn’t want another figure skater in the family, but my sister wanted to skate so badly that he gave in and now she’s on the ice with me,” Tuktamysheva noted.

Tuktamysheva pointed out that there is no favorite element for her in skating.

“Every day it is different, it depends on the consistency,” the athlete commented. “It can happen that there is one element that I do all the time and then suddenly on the ice it is like I don’t know how to do it. There is no element I don’t like either. It happens that an element isn’t working at all and then suddenly I can do it easily. In general, I like to jump. I also like just skating and spinning, but with them time doesn’t pass as quickly. When I’m jumping, I’m constantly in motion and I don’t notice how fast the time passes.”

Figure skating fascinates her for its elegance and the combination of artistry and technical difficulty.

The skater she looks up most to three-time Olympic medalist Evgeni Plushenko.

“He is a great skater,” she said. “Very artistic and very developed as a skater. I am glad that I can train together with such a master as he is. When he is on the ice, you feel right away that he is the king of the ice.”

She also likes Yu-Na Kim and Mao Asada for their elegant and effortless-looking  jumps.

The girl seems quiet, almost shy, but she has strong character and willpower.

“She can be cheerful, bored or sad, but I’m evaluating her character from a different point of view,” explained Mishin. “Her character is very suitable for figure skating. She is hard-working, she is persistent and she belongs to the rare category of athletes that exactly fulfill the instructions of their coach. That is her remarkable asset.”

Tuktamysheva proved her coach right by mastering the triple Axel.

“I did it for the first time this year,” she offered. “This jump didn’t come easy to me and I didn’t really think I’d ever do it, but then suddenly it worked and I jumped.”

She landed easy looking triple Axels in practice at the end of the past season and now is preparing to get the jump ready for competition. The 13-year-old took part in training camps in Estonia, Italy, and Germany over the summer.

“We only changed one program this season, the short program,” Tuktamysheva explained. “I’m skating to a mixture of Indian and Oriental music. We kept the Spanish free program Asturias.

Tuktamysheva named the jumps as her strength. She has a full arsenal of triples and also triple-triple combinations.

“Spins and footwork were my weakness, but now I’m not lagging behind my competitors anymore and I don’t have any big weaknesses,” she said.

Coach Mishin believes that her youth is her biggest disadvantage right now.

“She cannot yet compete at the senior level. Right now she has such a technical arsenal, such a quality of her skating, such a plasticity and such a… I’d say artistic vision of each move that she can compete even now with the best female skaters of the world.”

Mishin felt that his student has progressed a lot in the past three years under the tutelage of her coaches and choreographers.

“By working with top choreographers such as Tatiana Rodionova, Edvald Smirnov, Georgi Kovtun, she developed a high musicality and expressiveness. Right now she is able to create any image on the ice, from Michael Jackson to Giselle,” Mishin underlined proudly.

Tuktamysheva is scheduled to compete at the Junior Grand Prix events in Romania and Germany this fall.

People are already talking about her as skating’s next wunderkind, but this is something Tuktamysheva doesn’t like to hear.

“Well, I don’t regard myself as a wunderkind. I just have very good coaches who are doing everything to bring me to the highest performance level,” she noted. “By the way, we have a few other girls (in Russia), and I’m not really better than they are.”

The season, however, will show which one of the young Russian girls will head the wave.