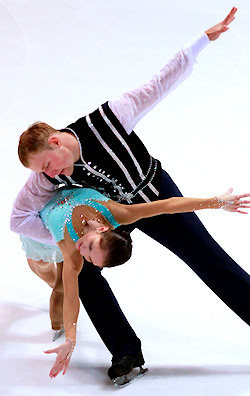 Vera Bazarova and Yuri Larionov of Russia perform to Man in the Iron Mask at the 2010 Nebelhorn Trophy.

Vera Bazarova and Yuri Larionov of Russia grabbed the gold at Nebelhorn Trophy on Friday in spite of Larionov suffering from  an injury. Italy’s Stefania Berton and Ondrej Hotarek skated to the silver medal, while the new Canadian team of Meagan Duhamel and Eric Radford took the bronze.

Bazarova and Larionov completed a triple twist, a throw triple loop and flip as well as difficult lifts in their routine to Man in the Iron Mask, but struggled with the side by side jumps. Both stumbled on the triple toe and he also touched down with his hand on the second jump in the double Axel-double Axel sequence. The team scored 165.30 points.

“It happend on the practice before the short program,” Larionov explained of his injury. “It was the end of the practice, and we decided to do the spin. I landed badly and pulled my groin. So I was skating with an injury. The doctor recommended us to withdraw, but I’m a man and decided to skate. I couldn’t let down my partner and my coach. I tried my best.”

“Today we felt a little bit more confident (than in the short program), but obviously Yuri’s injury affected us,” added Bazarova. “We were behind our music and there were some errors. This competition served to get some experience so that we don’t just go out to the Grand Prix without a test in competition.”

Berton and Hotarek’s program to Romeo and Juliet by Nino Rota contained a side by side triple toe-double toe-double toe combination, a double twist, a triple Salchow and two level-four spins, but Berton fell on both throw jumps that came late in their routine. The Italians remained in second place with 155.21 points.

“We are very happy as we had to overcome a lot of trouble before this competition,” Berton noted. “Ondrej was sick with a high fever and he was in bed for one week. This was one week before the competition, and it affected our preparation. We could have done better, but we tried to fight and I’m happy that we fought from the beginning to the end. Now we understand that we can do it even if we are not in great shape. We also discovered that we are always together, no matter what happens. We know that one will support the other.”

Duhamel and Radford opened their program to The Train and Meet Joe Black with a double twist that got a level three. They also hit a a throw triple Salchow and picked up a level four for all non-jump elements, but Radford missed the side by side triple flip and the side by side triple toe, while Duhamel stumbled badly on the throw triple flip. The Canadians came in third with 147.44 points.

“You have to start somewhere,” Duhamel pointed out. “Rome wasn’t built in a day. We didn’t get together to come to Nebelhorn, skate amazing and win. It would have been nice, but in the end that’s not what we are in for. We’re in for the long run and there are four more years and there is so much more room to grow. It is slightly disappointing, because in the last month, we went through two weeks where we skated clean long programs every day. We weren’t used to dealing with a mistake in a program. I think a little bit it threw off our focus. It is strange for me.”

Radford agreed. “I haven’t missed a jump like that in a very long time. I definitely learned more from this than if I went out there and everything worked perfectly. Now I know where I need to focus more.”

The team is now preparing for Skate Canada.

“Our practices and our plan is right on track and I think we’re just going to grow throughout the year,” offered Duhamel. She now won her third medal with her third partner at Nebelhorn Trophy: In 2005, she took the silver with Ryan Arnold, in 2007 she was second again with Craig Buntin, and now she has a bronze with Radford.

USA’s Gretchen Donlan and Andrew Speroff finished fourth at 135.58 points. The highlights of their program were a big throw triple Salchow and a triple twist, but he fell on an under-rotated double Axel and only did a double flip-single toe combination.

Germany’s Maylin Hausch and Daniel Wende moved up from seventh to fifth overall. The couple that lives and trains in Oberstdorf produced a double twist and throw triple flip, but she under-rotated the triple toe and stumbled out of the triple Salchow while he doubled this jump.