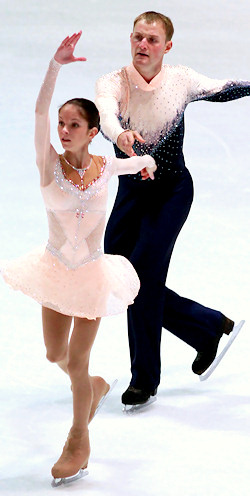 Vera Bazarova and Juri Larionov of Russia perform to Secret Garden at the 2010 Nebelhorn Trophy.

Top-favorites Vera Bazarova and Juri Larionov of Russia captured the Pairs Short at Nebelhorn Trophy on Thursday, but it was a rather weak competition with lots of errors. Italy’s Stefania Berton and Ondrej Hotarek finished second ahead of Canadians Meagan Duhamel and Eric Radford.

Skating to Secret Garden, Bazarova and Larionov both stumbled on their side by side triple toes, but recovered to complete a high triple twist, a throw triple flip and a level-four Axel Lasso. They earned 57.30 points.

“Obviously this was not our best performance,” commented Bazarova. “It was very weird, we felt sleepy. In practice everything was fine. We know that tomorrow in the free skating we have to be more active.”

Berton and Hotarek turned in the only clean performance of the Pairs Short. Their routine to an expressive Tango was highlighted by a nice side by side triple toe, a double twist, and a throw triple loop. They also picked up a level four for the Axel Lasso lift, the combination spin, and the step sequence to score 54.20 points.

“This was quite good,” a happy Hotarek said.

Duhamel and Radford ambitiously went for a side by side triple Lutz, but she doubled while he stumbled. The new Canadian team produced a double twist, throw triple flip and got a level four for the spin and the death spiral. They have 51.81 points.

“It could have been a little better,” confessed Radford. “We’ve been training better than that. For the first time out, we were feeling quite comfortable.” Duhamel added: “It just didn’t quite translate into the program tonight. I did a double jump. I didn’t even attempt to do a triple, and that is disappointing. But everything else worked well.”

USA’s Gretchen Donlan and Andrew Speroff came in fourth. She fell on the side by side double Axel that was under-rotated (46.04 points). Teammates Felicia Zhang and Taylor Toth came in sixth after a messy triple twist and a fall from Zhang on the throw triple loop.

Joanna Sulej and Mateusz Chruscinski of Poland are currently ranked fifth. She fell on the throw triple flip (42.95 points).