On a balmy autumn evening, thousands of skating fans filled the Staples Center in Los Angeles to take part in the North American premiere of 2010 All That Skate LA. The show, presented by Olympic Champion Yuna Kim’s management agency AT Sports, gathered an impressive roster of figure skating royalty, and brought them together for a spectacle unlike any other skating show to date. 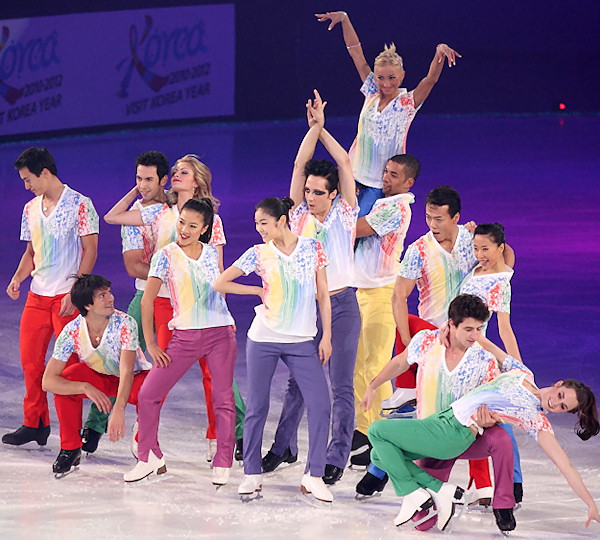 From the opening of the show, it was apparent that this show would be different from other skating shows. The lighting design for instance, was catered to each skater’s specific program theme, and was enhanced by a video screen that flowed choreographed images to the skater’s music. The skaters chose programs that were not only entertaining, but also demonstrated a high level of technical difficulty.

The show’s Artistic Director, David Wilson, created a  mood for the show from start to finish.  The opening, choreographed to The Black Eyes Peas’ Let’s Get it Started got the audience’s attention from the very start, and the group numbers between  solos were well thought out and interesting.

“The thought of coming to LA to put together a show is actually kind of surreal,” Wilson admitted after the show. “We kind of did this show in Korea, but we added a couple of new numbers to it for this show. I had about half of the same cast as I did in Korea, so it was really kind of fun not only to make the changes, but to also master what we did the first time.”

The show marked the return of skating legend Michelle Kwan’s return to American ice after a four-year hiatus to pursue higher I forgot what adrenaline feels like,” she remarked after the show. “That surge of energy that you get before you take the ice is amazing. I missed it. It feels great to be back- especially here in LA with family and friends.”

Kwan, who skated two solo numbers, a duet with Kim, and in the opening and closing numbers, had a busy evening. But even with such a heavy workload, she showed her usual poise and grace on and off the ice.

“It was liberating,” Kwan explained of her return to the ice. “After four years away from the ice, performing here in the Staples Center was just very liberating.”

Kwan’s first number of the evening showed the sexy side to the now thirty year-old graduate student. Using Alicia Key’s No One as the backdrop, Kwan announced that she was no longer a little girl skating to pretty music, but instead a strong and powerful woman who can handle herself.

In the second act Kwan went back to her roots, choosing to skate to a haunting ballad by Sara Bareilles and Ingrid Michaelson called Winter Song, which elicited chills and a few tears. Kwan used her trademark tug at your heartstring style to perform with the same ethereal quality that transformed her into a household name.

“Skating with heart and passion is something that has always been a goal of mine,” Kwan confessed. “I try to skate to things that I really feel. My sister choreographed that number. She knows how I move, but it’s not the normal choreography that I usually do. This program was special to me for many reasons- working with my sister, the music is great, and I love Sara Bareilles.”

Kwan also skated a number with the hostess of the show, Kim, at the end of the first act. The duet started out with a video montage of the two explaining who their idols in skating were and why they got started. Kwan spoke of seeing Brian Boitano skate at the 1988 Olympic Games when she was seven, and of how she knew that was what she wanted to do. Kim spoke of how Kwan was her idol, and of how amazing it was for her to be sharing the ice with and getting to know her inspiration.

The program, appropriately skated to Mariah Carey’s Hero, was somewhat schmaltzy, but it somehow captured the emotion of what it must be like to meet one’s idol. Both skaters seemed to genuinely enjoy skating the program, one looking over hear shoulder at what she helped to inspire, and the other looking forward to see what life has to offer.

“Watching her the past couple of years, and seeing her get more and more consistent, and developing more passion in her skating… I think that the Olympics was an exhibit of it all,” Kwan said of Kim’s gold medal winning performances in Vancouver. “With all of the pressure that she had, I think that her being able to stand up and just do it was incredible. I was just blown away.”

“It was very exciting to skate with so many champions- especially Michelle,” Kim admitted after the show. “It was the second time that we skated the Hero program, so it was definitely much more comfortable. Skating it here, in the Staples Center where I won the World Championships made it even more special. I have a lot of fond memories here now.”

“I love to compete, but I also love to skate in shows,” Kim admitted. “There is no pressure in an ice show, so it’s just a lot of fun performing. ”

Both of Lambiel’s programs received thunderous applause from the audience, and were some of the most inspired and entertaining of the evening. For his first number, the Olympic silver medalist skated to Let the Good Times Roll by Ray Charles, showing spunky and sleek choreography that inspired cat calls from many of the ladies attending the show.

Lambiel’s second number was an adaptation of his 2010 Olympic short program to the William Tell Overture, and it was a big hit with the crowd. In this program, Lambiel not only gave the audience a master class on world class spinning, but he also invited them down on the ice with him as he drew them in with his playful choreography. If ever there were a skater meant for show skating, Lambiel fits the bill.

Olympic champions Shen and Zhao used music from the programs that propelled them to victory in Vancouver. Their first number, a vocal version of their short program to Who Wants to Live Forever, demonstrated that unique blend of big tricks and passion that only Shen and Zhao can execute. Their second number, an amended version of their Turandot freeskate was one of those numbers that causes goose bumps on the arms.

In the Turadot program, Shen seduced Zhao by using a bright red fan and cape, and used him as a means to technical glory. Everything from their lifts to their split twist was not only technically perfect, but the execution of the artistic vision of the program was spot on.

Wagner, the most inexperienced skater in the cast, held her own in the show, and skated two fun programs. The first, a sassy performance to Christina Aguilera’s Ain’t No Other Man, showed that Wagner has worked to develop her performance quality within her programs. Meanwhile her second program, a sultry take on Lady Gaga’s Speechless announced that Wagner’s technical ability will be a force to be reckoned with this season.

“I was really surprised that I was invited to be here,” Wagner admitted sheepishly. “I feel like a little guppy among this amazing cast, and I am having a great time. Being on the same ice as Michelle, I have already learned so much about how to perform and how she coaches herself.”

Belbin and Agosto, who recently announced their retirement from competitive skating, performed with a renewed sense of confidence in both of their programs, and seem to have a grasp on the storytelling side of show skating.

“This show has been so much fun for us to be a part of, and with all of the production values added to it, we are really happy to be a part of it,” Agosto explained.

“It’s pretty incredible,” Belbin confessed. “To have this kind of reaction in North America has been amazing. Thank God for Yuna for bringing this show to the States, and for having us be a part of it.”

In their first program to Jason Mraz’s If It Kills Me, Belbin and Agosto start out as children who love to play with each other. As the program progresses, they grow into teenagers who become best friends, and ultimately realize that they have fallen in love.

Their second number to Use Somebody by Kings of Leon was more about the tricks that the 2006 Olympic silver medalists can do. Belbin and Agosto performed difficult lifts and cool hydroblading moves that were entertaining and created suspense throughout the program.

The always-controversial Johnny Weir skated two programs that were in stark contrast to one another. The first, a heart-on-your-sleeve kind of performance to A Comme Amour by Heartbroken was a study in human emotion. Weir was passionate, sometimes dark, but simply sublime throughout the performance.

His second program, his signature Lady Gaga Pokerface exhibition program was everything that Johnny has shown to be off ice. There is a juxtaposition between elegance and dirty that works somehow in this program, and the only way to put into words is to say that it is like that indescribable outfit that you saw on ‘Project Runway’ and secretly want to wear to church on Sunday morning.

Virtue and Moir used this show as a means to performing their new short dance in front of an audience, and judging by the response, the program is a strong vehicle for the Olympic Champions. Skating to music from the soundtrack to Nights and Days, Virtue and Moir showed a fire that is necessary when doing the tango, and were crisp and sure throughout the entire program.

For their second number, the duo skated to I Wanna Hold Your Hand sung by T.V. Carpio.

Their teammate Chan also skated his new short program tonight to Paul Desmond’s version of Take Five. Though Chan did not perform the same jumps that he will in his competitive program, the rest of the elements were strong and performed with panache. Chan’s interpretation of this often-used music was fresh and entertaining, and the audience was appreciative of his attack throughout the performance.

Chan’s second program was set to Coldplay’s Viva la Vida, and was appropriately choreographed with modern dance moves strewn throughout. While the program lost some steam due to a stumble on some footwork, Chan was entertaining nevertheless.

Two-time World Champions Savchenko and Szolkowy performed a cute number to Aqua’s Barbie Girl, complete with blow up chair and other Barbie accessories. The theme of the program in of itself is fun, but the strength of the program is in the big tricks that Savchenko and Szolkowy can do. Their lifts were not only beautiful, but it wouldn’t be a stretch to say that this is the only team in the world who can do them well.

Their second program to Nella Fantasia by Cortes was the polar opposite of the first. This program was elegant, emotional, and beautiful, while the first was fun, flirty, and gimmicky. Again, Savchenko and Szolkowy performed beautiful lifts and risky tricks that drew gasps and ahhs from the audience.

The show came to a close with two performances by Younha, a Korean pop singer who provided music for the finale of the show. At the end, the cast received an overwhelming standing ovation, proof that show skating is alive and well in North America.