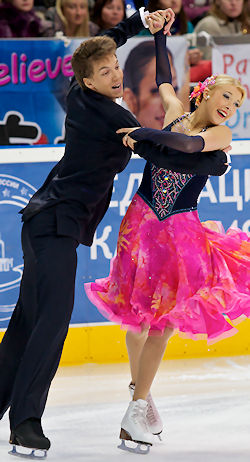 Ekaterina Bobrova and Dmitri Soloviev of Russia perform a Waltz by Tom Jones in the Short Dance.

Ekaterina Bobrova and Dmitri Soloviev secured their position as the leading Russian team as they won the short dance event at the 2010 Cup of Russia.

Skating first in the second group, Bobrova and Soloviev were almost flawless in their execution of a dance set, somewhat unexpectedly, to Tom Jones’ Delilah. The only technical glitch in their fast paced and powerful routine was an opening twizzle sequence, which receive only a level three. They have posted a new season’s best of 60.80 and were the only couple to score over the 60-point benchmark.

“First of all we would like to thank the audience for their support,” said Soloviev at the press conference. “It is always great to skate at home in Moscow. It is very easy emotionally to perform the dance when the audience is behind you like that. I believe emotionally it was better than at Cup of China. It’s a pity that I made that little mistake.”

When asked about their unconventional choice of music, the skaters describe the idea as ‘exciting’. “Yes, we thought it was going to be difficult to join compulsory and original dance together,” commented Soloviev. “I guess we still have not fully incorporated the Golden Waltz into the overall dance, but I think the more we get used to it, the better it will become. The goal is to make really just one short dance.”

“I have to say that it is really interesting for us to skate compulsory dances this way,” added Bobrova. “We all got used to skating to the same tunes over and over, so when the coaches first switched that music on and told us to skate the Golden Waltz, we immediately became curious. I guess it helps us to skate this part of the dance, not as a compulsory, but as a part of the choreography. It’s a lot of fun.”

While the couple admits that they are aware of the tragic fate of the song’s heroine, their dance does not follow the plot line. “For us it is more a dance about two people in love,” said Bobrova. “It just has the Golden Waltz in the middle.”

Unlike the Russians, Federica Faiella and Massimo Scali of Italy followed the plot of their music of choice all the way through. The students of Natalia Linichuk have chosen the famous My Fair Lady for the short dance, and according to Scali, the dance is supposed to start midway through the movie with the famous Ascot races scene (which explains why Faiella’s costume is a copy of the one Audrey Hepburn has worn in the film). It then develops alongside the familiar script and ends up with Scali’s character falling in love with his partner.

While the Italians’ acting skills and the maturity of the performance were unmatched in the field, technical aspects of their dance left a lot of room for improvement. They also only received a level three for their twizzles, but they picked up three levels “two” on the top it: the Golden Waltz sequences, straightline life, and non-touching step sequence.

“Well, we are actually really happy we skated very well today,” said Scali. “It was, I think, probably a little hard for us because we came from a very bad experience in China, so we are still building our confidence. There is still much to do, especially on the technical side, which is the reason why we are second today. But we kept fighting and we enjoyed it. We hope the audience enjoyed it with us.”

The team, which announced that they were likely to retire at the end of last season, admitted that they are somewhat uncertain what exactly changed their minds. “You know, we are still trying to understand it ourselves sometimes,” explained Scali. “Yes, we were ready to retire at the end of the Olympic season, but then we thought that we still may contribute something to the sport of ice dancing. However, the main goal for the season is to win the European Championships gold medal. We already have two silvers from the event, and we believe that with the programs we have prepared for the season we are capable of reaching our goal.”

Like the Russian team, Faiella and Scali are also happy with the new format of ice dance competition, saying that the short dance “is working and we like it,” but they also have some reservations.

“I think what is the most important is to preserve the essences of dancing on the ice. Doing clean elements is great, but it is not everything,” said Scali. “What I do not like about the dance is that compulsory – pattern – dance is judged by those key points. You can skate poorly, but as long as you do four steps right you will get the level. I think the purpose of the compulsory dance is to show your basic skating skills, the edges, the flow. Hopefully after the first year they will modify the rules, but I would prefer it to happen after our retirement.”

The third place in the short dance went to the Hungarians Nora Hoffman and Maxim Zavozin. Even the skaters themselves have not quite seen it coming, but they were very happy about the outcome.

“First of all I would like to say that it is a great pleasure for me to talk to you today,” Hoffman told the press. “Back in Juniors, we often attended press conferences, but it has been years since we did it the last time. For us it has been a very special feeling to compete here today. We train near Moscow and the city has already become a second home to us. Maybe there were not quite so many people here today, but we felt that they received us very well.”

The team received a level three for all their elements, except for the final rotational lift (level 4), and have 57.24 points in total.

“We skated much better than in China,” noted Hoffman. “I also like the new format of the competition. I feel like it takes a lot of pressure away from us. I mean we have just skated one dance and we are almost done. Just the free dance to go. Before we had three events and it felt like we were competing a whole week long. By the time of the free dance, we were already very tired.”

“And it is really good that they have kept the compulsories,” added Zavozin. “Both me and Nora love the compulsories and we are thrilled that we no longer have to skate them to a few ISU-approved tunes.”

The 2010 World Junior Champions, Elena Ilinykh and Nikita Katsalapov of Russia, who were expected to challenge for the top three in Moscow, began their performance well, but the second part of their dance was nothing short of a disaster. First, the students of Alexander Zhulin failed to execute a straightline lift (Katsalapov was expected to swing his partner over his shoulder, but was not able to gain enough momentum), and then they also lost a few precious seconds of the dance when he fell on a transitional move. The team only earned 49.14 points and are currently sixth behind Russia’s Kristina Gorshkova and Vitali Butikov (51.97) and USA’s Madison Hubbell
and Keiffer Hubbell (50.59).