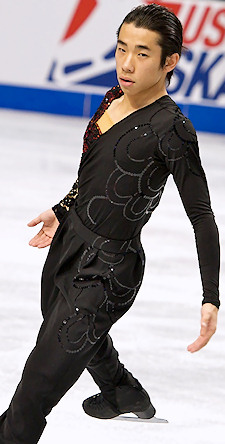 Nobunari Oda of Japan took first place in the Men's Short at Skate America with his performance to Storm by the Yoshida Brothers.

Oda narrowly edged out his teammate Takahashi to take the lead heading into today’s freeskate. USA’s Adam Rippon is in third place.

Oda skated a clean program to Storm by the Yoshida Brothers to earn a total of 79.28 points and the lead. The father of a newborn son, Oda opened with a gorgeous triple Axel, and was the only skater of the night to complete all of his jumps without error.

“I was nervous going into the program,” Oda confessed. “I didn’t make any mistakes on the jumps, however, I do regret making a small error in going into one spin. I was too slow going into that spin. However, I skated much better than I did in Skate Canada, and I am very happy with that.”

Oda admitted that his newborn son and having a wife has changed his perspective about skating, and has been helpful in becoming a better competitor.

“My son motivates me to skate better,” Oda said with a proud smile. “My wife takes very good care of me, and now skating is easier for me.”

Takahashi had the performance of the evening, however, he was not able to match his teammate’s mastery of the high-scoring jumps. The World Champion struggled with the landing of his opening underrotated triple Axel, and he stepped out of a triple Lutz later in the program.

“Today I really liked skating for the American audience, but I missed two jumps,” Takahashi said with a disappointed smile. “My layback spin was a level one, and that is a problem for me. I have been working very hard coming in to the competition, and I was very disappointed that I didn’t show that in my actual program.”

Even with the errors Takahashi nearly took the lead, scoring 78.12 points overall, and earned the highest program component scores of the evening for his Latin themed program.

Rippon, making his second appearance at Skate America, is looking to qualify for the first Grand Prix Final of his young career. After winning a bronze medal at Skate Canada two weeks ago, Rippon has placed himself in great position to do so. His Romeo and Juliet program was visually stunning, however, a mistake on his opening triple Axel relegated him to third place.

“I’m happy with the leveled elements,” Rippon explained. “With the jumps, I really just didn’t feel like my feel were underneath me. Mistakes happen. I have been practicing really well, and I’m just not going to let these mistakes affect me for the freeskate tomorrow.”

Rippon scored 73.94 points for his program, and admitted to feeling a little bit of pressure coming in as the top ranked American man in the competition.

“It’s hard at times to deal with the pressure, but I’m pretty good at handling it,” said the two-time Junior World Champion. “Most of the time the pressure that I have isn’t from everyone else; it’s pressure that I put on myself, and I have it well under control.”

“I wanted to skate as well as I could. I’ve been having a little bit of a problem with my short, so putting out a solid program was a big deal,” said the two-time Junior Grand Prix Final medalist. “I feel the level of men’s skating is really high right now, and I just want to be in the mix. I think that I helped myself with that goal today.”

Five men in tonight’s competition have competed within the US Figure Skating system: Mahbanoozadeh, Carriere, and Rippon are representing Team USA here in Portland. Austria’s Pfeifer competed at the 2007-08 Eastern Sectionals, but failed to make it to the 2008 U.S. National Championships. Japan’s Daisuke Murakami skated for Team USA at the 2006 Junior World Championships, and placed fifteenth at the 2007 U.S. Championships before switching over to compete for his home country.