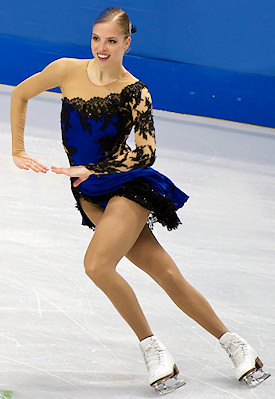 Carolina Kostner of Italy placed first in the Ladies' Short Program at Skate America with her Galicia Flamenco routine.

Sometimes simplicity is the best policy, and Italy’s Carolina Kostner is a case study in how breaking things down to the least common denominator can bring riches. Already a winner on the Grand Prix this season, Kostner takes the lead into the free skate here in Portland, Ore., with perhaps the easiest of all short programs skated today.

“I intended to do a triple triple combination today, and so even though I skated clean, it’s hard to feel satisfied,” said the leader.

Kostner opened with a triple toe loop-double toe loop combination and skated clean the rest of the way through to take the lead with 60.28 points.

“The reason I am not doing the flip and the Lutz this season is that the toe pick jumps put a lot of stress on my knee, so I have to be really careful,” Kostner explained. “We decided that I would compete in the Grand Prix series because I have been training for it, but really I never expected to do so well.”

Kostner said that the injury has caused her to refocus her energy off of the big tricks and onto the presentation of her skating.

“It takes a lot of pressure off knowing that technically I cannot compete with the best in the world, but skating is what I like,” she explained. “It’s not only about the difficult jumps. When I skate, it is an expression of myself, so it’s already a big, big emotion for me. I have been able to focus more attention on that side of my skating.”

Finishing in second place is the Junior World Champion Kanako Murakami from Japan, who finished in third place behind Kostner at the NHK Trophy earlier this season.

“After NHK Trophy, I have been practicing a lot,” said Murakami. “And because I was very nervous there, I have been skating to my music many times so that I can get more comfortable with my programs.”

After opening with a powerful triple toe loop-triple toe loop combination, Murakami looked as if she was ready to contend for the podium. A minor miscue on the required double Axel kept her at bay, however.

“I’m satisfied with today’s performance only except for the Axel,” the Japanese Junior Champ said through her childlike grin. “I just couldn’t make it, but I did the best that I could.”

Murakami earned 54.75 points for her efforts, and is in great position to qualify for her first Grand Prix Final after winning the Junior Final last season.

As a last minute replacement to the competition, Sweden’s Joshi Helgesson came to Portland directly from last week’s Cup of China competition, and admitted to feeling a bit jet lagged in her practices. In the competition, however, Helgesson stormed through her program with technical ease and finished in third place with 51.17 points.

“I was really excited just to get here since I went directly from China, but when I came here the practices were not so good in the beginning. They started getting better and better, and this is the best short program that I have done all season,” said the 17-year-old. “My goal is to skate two clean programs, but there was so much pressure on me because of the time difference from China. I did not feel strong when I first arrived, but now I feel like I can achieve my goal.”

Helgesson, who is competing here against her older sister Viktoria, was pleased with her performance, and looks forward to skating a strong free skate tomorrow afternoon.

U.S. Champion Rachael Flatt headed to Portland with high expectations on her shoulders after winning the silver medal at the NHK Trophy earlier this season. However, an as of yet undiagnosed injury to her right foot that occurred just this week has been nagging Flatt throughout her preparations since coming to Portland.

“We still haven’t officially diagnosed it yet, but when we get back to The Springs, we’ll have it looked at,” Flatt said of her right foot. “It affects my flip, Lutz, and is very uncomfortable on the loop. I’m doing the best that I can at this point, but obviously it’s very frustrating to be hurt at a competition. It’s not fun to deal with, but I intend to skate well in the long and pull up.”

Flatt struggled with her opening triple Lutz combination jump, doubling the first half, and then attempting to salvage the element by tacking a triple toe loop on the end.

“I was thinking on my feet since I doubled the Lutz and tried to put a toe on the back, but I did what I could and it obviously wasn’t my best,” Flatt lamented.

Flatt finished in fourth place with 51.02 points, just ahead of teammate Caroline Zhang who skated her best short program in recent memory. Her score of 50.66 points keeps her in medal contention heading into tomorrow’s deciding freeskate.