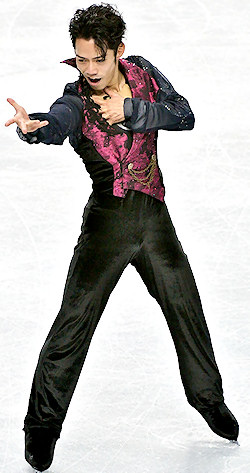 Daisuke Takahashi of Japan won the title as well as the hearts of the Skate America crowd with his routine to Invierno Porteno by Astor Piazzolla.

It wasn’t a combination of things that cost Japan’s Nobunari Oda the Skate America title in Portland- it was too many combinations. Oda, the overnight leader in the men’s competition, relinquished his lead and ceded the title to his countryman Daisuke Takahashi because he did more than the allowed three combinations in his freeskate.

“I have made this mistake so many times, that I really don’t have an excuse,” Oda said in the post-event press conference. “I won’t do it again. ”

Takahashi had some problems of his own, popping his opening quadruple toe loop attempt into a triple, and also falling on his second triple Axel attempt. The World Champion’s program component scores were head and shoulders above the rest of the field, propelling Takahashi to his third Skate America title in as many tries.

“Tonight I didn’t skate well, but the presentation was better than NHK,” Takahashi said. “That’s about all I can say about the performance.”

Takahashi skated a passionate Piazzolla tango to win the hearts of the audience with six clean triple jumps, and scored 148.95 points in the freeskate and a total of 227.02 points overall. With the win, Takahashi has earned a place in his fifth consecutive Grand Prix Final.

“My overall physical condition is improving, and as the Grand Prix Final gets closer, I need to get used to this,” Takahashi explained. “I also need to work on the spins, but I am very happy that I got level four on the footwork in both the short program and free skate.”

Oda opened with a fall on a credible quadruple toe loop attempt, but rebounded quickly with three strong triple jumps. The next, a second triple Axel was landed, but was given partial credit because he did not do an Axel in combination. However, the jump was still scored as one of Oda’s three combinations allowable by ISU rules, causing him to lose credit on a triple flip-double toe-double loop combination.

“I’m very disappointed with my performance tonight because I made some mistakes on the spins and jumps,” Oda admitted. “But the speed was much better, and I am happy with that.”

The silver medalist earned a total of 226.09- 146.81 in the freeskate, and will join his teammate in December’s Grand Prix Final in Beijing, China.

“I feel my programs are getting better, so I will keep training the way I am heading into the Final,” Oda shared. “I will do a quad in the Final, so I plan to work hard on training that between now and then.”

Finishing in a surprise third place was USA’s Armin Mahbanoozadeh, a relative unknown on the international circuit, who earned personal best scores in each phase of the competition. His total score of 211.17 is more than twenty points better than his previous personal best.

“I’m super excited,” said an exuberant Mahbanoozadeh. “I felt confident going into today, and I’m just happy that I could do most of my elements well. I can move forward from here, and keep on improving.”

The bronze medalist skated an elegant program to music from the soundtrack of Avatar, and landed seven clean triple jumps in the crowd’s favorite program of the evening.

“I’ve never gotten a reaction like that before, so it was my first time experiencing something like that,” Mahbanoozadeh said of his standing ovation. “I was really happy that I was able to let the audience feel a little bit of what I was feeling at that point.”

Slipping from third to fourth place overall was American Adam Rippon who had an uncharacteristically sloppy performance in his Rachmaninov freeskate.

“It’s a big disappointment to skate like that,” said a dejected Rippon after his program. “It happens, and I am just lucky that it happened here and not at a more important competition later in the season.”

Rippon scored a total of 203.12 points in the competition, far below his personal best, and managed just the seventh best freeskate of the night. The former Junior World Champion was credited with just three clean triple jumps, his worst performance in recent memory.

“If I could say anything about the performance, I would say that it was like a complete out of body experience,” he confessed. “Something I’ve never done in practice, never done in competition, and it’s just something that I’m going to take a look back on, review it, and move forward.”