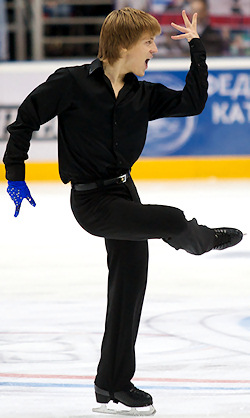 Tomas Verner of the Czech Republic, shown performing to a Michael Jackson medley, captured his first gold medal at a Grand Prix event at Cup of Russia.

Verner, who gave another nearly clean performance, was not upset about the small mistakes he made, but admitted being a bit disappointed that nobody in the media picked up on the fact that is was his first title.

“No one has mentioned anything about it. Is no one here following my career?” he joked at the post-event press conference.

Verner’s long program to the medley of Michael Jackson songs started off a bit slowly. The former European Champion began with three jumping passes before letting his emotions and dancing skills emerge to truly capture the audience’s attention.

“Today I have only skated for the audience,” he said later. “I really enjoyed the program and I hope it was something special for you as well. Over the course of the years the spectators have given me so much and I never had a chance to give something back to them, so this one is for you!”

Verner, who won bronze at Cup of China, did not expect to be able to qualify for the Grand Prix Final.

“The math was quite clear,” he pointed out. “I didn’t expect to be able to do it with the third place, not with the Japanese being so strong and there is also Takahiko [Kozuka who will compete] next week.
After my skate, I did not think about the placement. I thought I’d be third and I was fine with that… ready to use the time [before the Europeans] for preparation. I did not expect to be first and actually get a ticket. Now we’ll have to change something and practice more, but it is a good kind of change.”

A quad for the 24-year-old is one of the possible changes.

“I can do it separately during practices,” Verner shared, “but it is not a big deal. The big deal is to do it in the program and I am not comfortable enough yet.”

Verner stated if he could find the time to work on the quad, he might try it at the Grand Prix Final next month.

“It is an excellent opportunity,” he said. “Nothing too loose.”

“I guess the biggest fear for any skater is to fall out of the final warm up group, but it is not an issue at the Grand Prix Final as there is only one group,” he added jokingly.

After a disastrous Olympic year, Verner decided that the status quo is not working for him any longer and made big changes to his life. Some of them were easy, others were anything but.

“After the first two weeks [in Canada] I thought that I would not survive it,” he admitted. “They have a completely different approach to training in North America. They always do complete run-throughs. In Europe, we work on our programs in parts and then maybe have two or three complete run-throughs before the competition. However, it was clear that the European way was no longer working for me. And already after just five weeks I can feel the difference. I am still not entirely comfortable on the ice, but I go on and skate relatively clean. With a couple of weeks more I think I will adapt.”

“I still love her both as a person and as a choreographer,” said Verner. “She is truly great, but I wanted to do something else.”

Verner then went to Detroit and asked Pasquale Camerlengo if he would do two programs for him (Singing in the Rain‘ and a Michael Jackson medley).

“The timing could not have been better,” said Verner. “He just said ‘yes’ – it was that simple. All what was left was to cut the music so that it would not be too boring on one hand and too exciting on the other. I do not really want the audience to jump to their feet and dance and no longer pay attention to my performance.”

Overnight leader Chan slipped three points behind Verner to second place overall (227.21) with three falls and one jump combination too many. The Canadian Champion missed his quad attempt, his second triple Axel, and a second triple Lutz.

“I felt good going into the program,” said Chan. “Skating last is a bit of a challenge, but I thought that I would be able to handle it. I did everything as I usually do, but sometimes jumps simply do not happen. I am happy that I won a ticket to the Grand Prix Final. I know what I have to work on.”

“With the way the practices had been going in Colorado before I left for the Cup of Russia, it was really consistent,” Chan said of the quad. “I will definitely keep doing it. First of all because I enjoy it and also because it is a challenge. I just hope that I will get more comfortable with it with time and by the World Championships it will no longer be quite so stressful.”

Introducing a new element was one of the reasons why Chan has decided to keep his Phantom of the Opera routine from the last year, but it was not the only one.

“I did not have a good season last year,” he noted. “No Grand Prix Final, no Cup of Russia, disappointing Olympics… I really wanted to revamp this program, improve it and skate it better.”

The 2010 World Championship silver medalist refused to blame his other mistakes on the fall on the opening element.

“The quad was not a problem today,” Chan admitted. “I fell on it, but I have recovered. The problem was the ending of the program when things started to fall apart a little bit. It is funny in a way. Before, I laughed when other skaters made such mistakes (doing too many combinations), but now I have done it myself. Shame on me, but it will not happen next time. I just had to get it out of the way. What has happened, I guess, is that at home we always work on various versions of the program in case something goes wrong at the beginning. I was so focused on having a strong ending that I switched to the training mentality and I completely forgot that I had already done a triple Axel – triple toe loop combination.”

Abbott placed fourth in the long and third overall (217.21) with an error-ridden performance to music from the Life is Beautiful soundtrack. What hurt the student of Yuko Sato and Jason Dungjen the most was the fact that the technical panel marked his three failed jumps as underrotated.

“I failed to secure a place at the Grand Prix Final, so I am disappointed about it,” said the U.S. Champion. “My training was very sporadic with the boot issues I was having this season. I lost time after Japan and it broke up my training. It just wasn’t as good a routine as I wanted it to be. I felt that my program is strong and I have done some things very well, but the ice is slippery and sometimes we fall.”

“I am not exactly portraying the character from the movie,” explained Abbott of his routine. “It is more about the emotions the movie embodies that contrast between harsh reality and an imaginary world in which everything is a game.”

“I have a tendency to change choreographers after each season,” he continued. “I enjoy the challenge of it, a chance to grow both as a skater and as an artist, and learn new ways of moving. After the Olympic Games, I really wanted to do a flamenco – a strong and powerful program, very different from what I have done before. I asked Antonio Najarro to choreograph it, because I loved his work with Stéphane Lambiel and other skaters.”

In contrast to a rather well skated short program, the Men’s Free Program competition was not a stellar night for the majority of the participants. All five attempts to execute a quad toe loop ended up in falls with four of them carrying an extra penalty for underrotation. The only one to avoid it and pick up a ‘full’ 6.73 points for his failure was Javier Fernandez of Spain.

However the difficult jump proved to be too much of a challenge for the student of Nikolai Morozov. While the Spaniard landed a solid triple Axel right after the quad, he went on to pop all the jumps in the middle of his entertaining routine to the Pirates of the Caribbean to finish 10th in the long program and ninth overall.