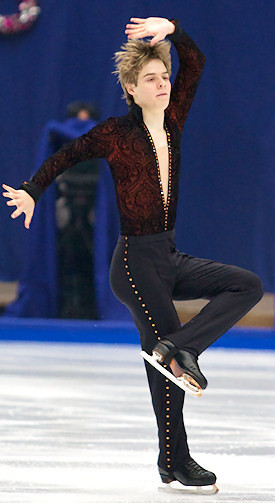 Dornbush, who skated last in the first flight, nailed all his elements and displayed excellent flow and sharp presentation skills in his routine to Elena by Brian Setzer. He earned a level four on all his spins as well as a level three on a straightline step sequence to post a new personal best of 70.75 points. The student of Tammy Gambill was the only one to score above 70 points.

“I am very happy with my performance,” he said. “I went out there and had fun and did what I came to do. I have been training hard and think that program is ready. I am there now. For tomorrow I have a great program. I love the character of Sherlock Holmes and read quite a few of the books. I can’t wait to get out there again. Last year I was injured, but I did a lot of off-ice training which really helped me keep in shape and my body balanced. I stayed healthy and it has paid off today.”

Since his last autumn Junior Grand Prix event in Dresden, the skater focused mainly on getting a triple Axel consisted enough to include into the short program – the task at which he obviously succeeded as he got mostly positive grades of execution for the element.

“I also worked on my second mark, as well as levels for spins and steps. It is always work in progress,” he added.

The 19-year-old hopes to draw on the experience he gained at the two previous Junior Grand Prix Finals to perform well tomorrow.

“I think of them were valuable lessons,” Dornbush said. “Last year I skated poorly in the short program, but I did a good long – at least a good one compared to the short. I pulled up. A year before that I was third in the short program and I was focused on holding onto that placement and staying on my feet. I succeeded.”

Messing slightly outscored his teammate on program component scores and nearly earned a straight +2.00 for his impressive triple Axel with excellent running edge. However, he lost most of his technical advantage when his two spins were graded level one to receive 68.52 points in total – less than half a point away from his personal best.

The Junior Grand Prix Final debutant delivered an outstanding routine to music from the Robin Hood soundtrack. He maintained the character throughout the entire program with numerous touches during step sequences and in-between moves carrying the theme of the famous sharpshooter.

“I let my blades fly,” said the student of Ralph Burghardt. “It came out clean and I enjoyed every second of it, too. The triple Axel – when you have to do it and you actually do it… there is nothing like it. I am really happy that I skated that well. I had a blast. Everything was nice and smooth and I was able to put up a show for the audience, so I am very pleased.”

For the long program, however, he plan to take a conservative route.

“There will be two Axels and we will take out the quad; planning it a bit safe,” Messing revealed. “Practice for the short program was a bit shaky, but it kept me focused on the main event. Since my last competition [in Ostrava] I worked mainly on skating a clean long program, getting the consistency up so that I would be able to relax and have fun.”

Unlike the majority of compatriots, who have mostly been known for their arsenal of jumps, China’s Han Yan’s strongest skill is his presentation. The debutant of the Finals posted a well deserved highest program component score of the night for a highly entertaining and swingy routine to Time Club. However, his lack of a triple Axel did not allow him to place higher than third in the strong field. Even though he earned impressive grades of execution on all his element, including spins, he only received a total of 67.29. While it’s a new personal best, it puts him three points below the leader.

“I feel the pressure is a lot higher here in Beijing,” said Yan. “I performed as I did in training and I felt good. I only did a double Axel although I have been training a triple Axel. I may do it at the National Championships. This year I do feel psychologically more mature, however, I feel my technical difficulty is not high enough compared to high level athletes.”

Training mates Joshua Farris and Max Aaron (USA) made identical mistakes in their short programs. The students of Tom Zakrajsek stumbled on the landing of their triple loops out of steps. Both, however, nailed their triple Axels. Even though Aaron did a better Axel triple Lutz – triple toe loop combination, Farris ended up being (65.24 vs. 63.78) thanks to higher levels of difficulty on his spins.

“For the triple loop I look the pattern a little wide and I had to rush it,” explained Aaron. “For the flying camel (which received a level one) we did not want to risk a level three with minus one deduction, but I will change that in the future.”

“I was very nervous,” admitted Farris. “I came to the Final for the first time just for the learning experience. I was just thinking how to breathe. I had the nervous energy and the excitement as well, so it was overwhelming. I had a little mistake on the triple loop. I tend to rush the jumps in general, so I tried to slow down, but when I realized that I had started the rotation, it was too late to slow down. So that’s why the mistake happened.”

The last skater to receive a mark above 60 points was Russia’s Zhan Bush (60.05). The student of Alexei Urmanov fought for the landing of his opening triple Axel and later stumbled on the landing of the second jump in combination.

“I coped with my nervousness and I did what I wanted to do,” said the student from St. Petersburg. “There was just a minor error on the combination. I leaned forward on the landing of the second jump, but I don’t think it was a bit deal. Tomorrow I’ll fight again. I did the triple Axel for the first time in an international competition. I started doing triple Axels more consistently only recently. It means a lot to me to have it done today.”

Andrei Rogozine of Canada, the highest ranked skater after the qualifying events, was last to skate. The finalist had troubles with the landing of all his jumping passes, and his triple toe loop in combination with a triple flip was counted as underrotated. He also only earned a level one for his combination spin. With 59.17 points it will be difficult for him to pull up to the podium. Even though considering the overall quality of his skating, he fully deserves to be among the contenders for the title.

Russia’s Gordei Gorshkov fell out of an underrotated triple Axel and finished last with 55.55 points.