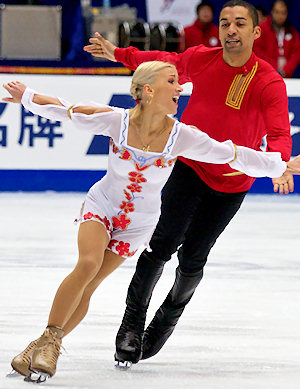 Aljona Savchenko and Robin Szolkowy of Germany lead the Pairs by nearly six points after the Short Program at the 2010-11 Grand Prix Final of Figure Skating.

Aljona Savchenko and Robin Szolkowy of Germany currently lead the Pairs after the Short Program, followed by China’s Qing Pang and Jian Tong and Russia’s Vera Bazarova and Yuri Larionov.

The second competition day of the 2010-11 Grand Prix Final ended with the Pairs Short Program and one could hardly have asked for better conclusion.

Despite the fact that this competition was a debut for four out of the six teams, the event was very well skated. The only major mistake was a weird fall by Dylan Moscovitch of Canada on a flying spin entry.

The field was so deep, however, that it was enough to push the Canadians all the way down to the sixth place.

Savchenko and Szolkowy delivered a powerful performance to a Russian folk song Korobushka arranged by Bond. The Germans were finally able to nail all technical elements, and their excitement shined through the rest of the program which suited its upbeat and exuberant character perfectly.

Even though their death spiral received a level three, all other elements, including the straightline step sequence, were graded a level four. As a result, this gave them an impressive advantage in the basic value of the program, allowing them to post a score of 74.40 – six points ahead of the Chinese team.

“It was out best skate this season,” said Szolkowy. “This is our third competition and we keep improving from one event to the next. It is not just the points, it the fact that we avoided major mistakes and the whole program felt better than before.”

The 2010 Olympic bronze medalists lost valuable training time before the Grand Prix Final as their luggage had been lost on its way from Trophee Eric Bompard in Paris.

“Yes, we had a very relaxing week,” joked Szolkowy. “The initial plan was to come back to Chemnitz on Sunday and resume training on Monday. But on Sunday, we got stuck in the airport in Munich. We eventually did make it home, by car, and without luggage. At first we thought it was not a big deal and that it would be delivered tomorrow, but it did not happen. Nothing happened for five days. We tried to practice, I took out my old skates and Aljona got a pair from another skater. We took the ice, skated around the rink for three minutes and felt like hobby skaters. It was the extent of our practices till the luggage finally arrived on Friday. But so far, so good.”

The team, who skated serious soulful programs in the Olympic season, wanted something different this year.

“We took this music because we wanted to show a different side of Savchenko-Szolkowy, just like we do each year. I suppose it is easier for Aljona, since it is not my roots, but I am getting better and more comfortable with each event.”

Pang and Tong went back to last season’s Pearl Fishers program in order to receive better levels of difficulty, but it did not work for the reigning World Champions. The team was nearly flawless, nailing side-by-side jumps, a throw and trademark triple twist, but their step sequence was once again graded a level one. As a result, they only received 68.63 points.

“After the Olympic season, we look a long time off and did not have that much time to choreograph new programs,” explained Tong. “We did a new short program at two Grand Prix events, but we did not get the levels we expected to get. So we switched back to this program, hoping to improve the situation since we always got a level three for the step sequence last year. But we still failed, which is very disappointing. Another reason was that we really wanted to skate this program in China. Last year we did not get a chance.”

“Overall we are satisfied,” he continued. “We lost some points [due to low levels], but it was a major improvement since Cup of China. At the next event [Asian Games] we plan to skate better.”

The 2010 Olympic silver medalists are not discouraged by the gap in points.

“We studied protocols and saw the levels, so we understand where the difference came from,” said Tong, “but between the two of us (the Germans), it is always like that. Sometimes we do better, sometimes they do. This time, in terms of technical details, they definitely did better, but there is still tomorrow.”

Bazarova and Larionov had a slightly shaky start to their routine as Larionov leaned down on triple toe loop landing. Later they only received a level one for their death spiral, but overall, the team from Perm has gained enough confidence over the successful autumn season not to look out of place among the ranks of the World’s best pair skaters. They have already picked up high technical scores in the past, but this time the artistic impression from their performance was also very strong.

The Russian bronze medalists still lack the presence displayed by the German and the Chinese, but the gap between them is closing fast and their lines and basic skating skills are as strong as anyone else’s. The students of Ludmila Kalinina received 63.86 points.

“We expected better from ourselves,” said Larionov. “I made a mistake on a side by side jump. It’s a pity. But we will show 100% tomorrow.”

“We felt calm and confident,” added Bazarova. “Maybe too calm, and we would have needed a little bit more adrenalin.”

The team, which competed in Japan and Paris in autumn, said that they love competing in Asia. “The atmosphere here is great,” said Bazarova.

China’s Wenjing Sui and Cong Han showed that their decision to compete in the Senior Final instead of the Junior one (they qualified for both and had to pick up one) was spot on. The 2009-10 Junior Grand Prix Champions delivered a highly entertaining routine to country music which featured a level three triple twist, a strong throw triple flip, and easy side by side double Axels, as well as dense connecting moves.

Despite their young age and relative lack of experience (it is only their second year on the international stage) Sui and Han proved to be excellent performers, capturing the style of the music perfectly and never falling out of character. They received 61.49 points, a new personal best, and are in contest for a medal.

“It is very exciting to be in the Grand Prix Final,” said Han. “This is the first time we competed at Senior Finals, so we have no expectations in terms of placement. We were quite nervous. Our country gave us a lot of encouragement; we are proud of it.”

Russia’s Lubov Iliushechkina and Nodari Maisuradze were also very impressive in their routine to The Marriage of Figaro, which capitalizes on their excellent carriage and posture, as well as their ability to execute complex transitions. The students of Natalia Pavlova landed triple toe loops and a throw triple loop, but later received low levels on their death spiral and final lift which they had to rush through to avoid finishing behind the music. They got 60.06 points.

Canadians Kirsten Moore-Towers and Dylan Moscovitch skated a clean program with a triple twist and side by side triple toe loops, but a fall (Moscovitch) before the final spin, and low levels of difficulty on death spiral and step sequence, put them below other competitors (58.73).

“I believe I hit my toe pick,” said Moscovitch. “It’s just one of those things that happens.”