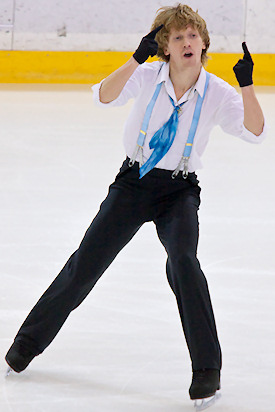 Konstantin Menshov currently leads the Men after the Short Program at the 2011 Russian Figure Skating Championships.

The final event of the first day of the Championships provided a lot of drama, but only a handful of truly impressive performances.

Konstantin Menshov finally got a chance to attend the press conference at the national championships as an overnight leader, but the skater, who is prone to making mistakes, is closely followed by Artur Dmitriev, Jr.. The only other skater to score above 70 points was Ivan Tretiakov who is currently third.

Performing a program called the “Silver Guitar,” Menshov began with a clean and solid triple Axel, but had a tight landing on a quad toe loop immediately afterwards. After a bit of fighting for balance, he was able to tack on a double toe loop at the end of it, and then went on to execute a clean triple loop out of steps – his final jumping element.

Getting the “risky” elements out of the way, the student of Evgeni Rukavicin was finally able to relax and enjoy the rest of his playful program.

His program, which he kept from last season, apparently describes an eventful holiday.

“It’s about a holiday,” Menshov explained. “I have a vacation, I am having some fun. Then there is a chase, police sirens, and I tried to chase a girl.”

Even though the skater did not reveal whether the program had a happy ending in store for his character, it was certainly one of a kind for 27-year-old.

“I cannot say that it was a surprise,” Menshov said. “I mean we all work hard, trying to skate as well as we could and place as high as possible. Otherwise we would not have been in the sport in the first place and I would have quit long time ago. Come to think of it, I started skating when I was six, which means it has been 21 years for me. Oh, my! Isn’t that a lot?”

He was happy about the outcome, though.

“The quad did not work all that well, but I am happy that I was able to do it at all,” he summed up. “At first I thought I was going to fall. Of course I had planned a quad-triple combination, but it was impossible. I would like to thank everyone who has supported me.”

Menshov earned 78.42 (39.70/38.72) points, and for the first time in his long career, led the field at the national championships. Despite his age, however, he did not exclude the possibility to compete in Sochi.

“It will all depend on how I feel, on how much energy I have,” he explained. “Right now I am feeling strong, so I want to continue. But who knows what will happen next. I dislike such a long-term prognosis. Let’s just see what will happen tomorrow.”

Dmitriev, who has recently moved from St. Petersburg to Moscow, successfully debuted a new combination: a triple Lutz-triple loop, and nailed a triple Axel and triple flip out of steps. His spins were also strong enough with the majority receiving levels three, however, artistically his routine to Nostradamus by Maksim Mrvica had little to offer beyond sheer power and his obvious enjoyment of the things going well.

“I am happy with my performance,” he said at the press conference, “especially about the fact that I have landed a new combination jump. I wanted to try something new, to surprise, but since the quad is not ready yet, I went for this combination.”

He agreed with Menshov that skaters are always trying hard and pushing the boundaries, and promised to include a quad in the short program should he qualify for the European Championships. He is currently second with 77.65 (41.08/36.57) points.

The son of two-time Olympic Champion Artur Dmitriev refused to comment on his reasons to switch coaches, stating that “that is personal,” but said that the main change after he joined Elena Vodorezova’s group is that he started to train more. “Before, my back bothered me and I could not train at full strength. Now I finally can do it and I am looking forward to working even harder, aiming at the Olympic Games in Sochi.”

Tretiakov skated a technically sound routine to Jean Sibelius’ Valse Triste, however, failed to captivate the audience outside required elements. The skater himself was not pleased either.

“I would say it was a mediocre performance,” he admitted. “I am upset about missing the combination jump. It is usually very consistent in practices.”

“Naturally, I was nervous,” he said afterwards, “but I have done my best to focus and deliver a good program. There are 17 competitors here and the field is very even. I cannot even name just one favorite. As for my own performance, it was ok. A sound, clean run through. The first clean one this year. I have just realized it.”

Training mate Zhan Bush rotated a triple Axel but really took his time setting up for the jump, and only did a triple flip in combination with a triple toe loop. He is a close fifth with 69.05 (34.9034.15) points.

One of the few pleasant surprises of the competition was Maxim Kovtun from Ekaterinburg. Skating to blues music, the 15-years old began with an effortless triple Axel, but then had a shaky landing on a toe loop in combination with a triple Lutz. His final jumping element, a triple loop, was also clean, but despite his strong basic skating skills and good presentation of the program, low levels of difficulty of his spins and steps kept him below the more experienced competitors. He is currently sixth with 67.63 (35.52/32.11) points.

Artur Gachinski was the last to skate, but it was a night to forget for the student of Alexei Mishin who had been considered a favorite to win a title. He crashed on his opening quad toe loop and again on a triple Axel attempt. The second fall looked very painful and the skater took his time getting up before limping first to the referee and then off the ice, nursing his left knee. The allotted three-minute break to recover allowed him to pull himself together and he returned to the ice to deliver the rest of the program clean, but with only one triple loop to his credit, he is currently ninth with 64.75 points, below Vladislav Sezganov (66.85) and Denis Leushin (66.51).

Another favorite, Sergei Voronov, also struggled with his jumping passes. The student of Nikolai Morozov underrotated a quad toe loop in combination with a double, and popped an Axel into a single. He finished 13th (60.14).

Stanislav Samokhin was funny and cheeky in his routine to an unusual arrangement of Pink Panther, but he only had a triple Salchow – triple toe loop combination jump in which he underrotated the toe. He did, however, land a triple Axel. He is 10th with 64.58 points.

Ivan Bariev skated the most intense and packed with in-between moves program of the night to a medley of Michael Jackson songs, but fell on triple Axel and only did triple toe loop – triple toe loop combination. He is 12th (62.67) behind a conservative skate by Mark Shakhmatov, who did not attempt a triple Axel (63.84).