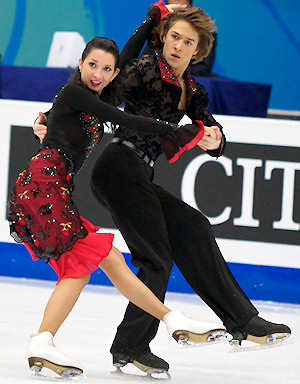 Unlike the short dance competition yesterday, the free dance event saw a number of major mistakes by leading teams and few truly relaxed and outstanding performances.

After a disappointing result of the short dance, Monko (18) and Khaliavin (20) needed a clean program to win another title. However, the pressure seemed to be too much for the team which remained on the Junior circuit for another year to earn the World Junior Championships title – the only gold medal they have missed last season.

Still the Muscovites managed to pull up, but their score (80.72) was almost ten points less than their personal best. Khaliavin stumbled during the circular step sequence, which received a level three regardless. The students of Svetlana Alexeeva also had problems with transitional moves. Still, the introspective music choice was an excellent vehicle for the experienced team, and highlighted their skills and maturity. A combination of understated presentation with sharp moves and precision matched the character perfectly and allowed them to post the highest program component scores of the night (they were also the only one to receive more than 40 points for this aspect).

“Our performance was satisfying and the result is positive,” said Khaliavin. “We did not feel any special pressure. Our goal was just to skate our best. Unfortunately we did not do that yesterday and today. I do not really know why, maybe we were a little tired from the season, but I think winning Junior Grand Prix Final twice is a impressive result.”

Performing to Saint-Saens’ Samson and Delilah, Sinitsina and Zhiganshin once again were the strongest team technically – even though the execution of their twizzle sequence in the beginning of the dance could have been better. The team, however, lacked the sophistication of elder teams and their dance suffered in comparison to the excellent program Meryl Davis and Charlie White did to the same tune two years ago. While good in its own right, especially for a Junior team, the dance simply lacked the purpose and density that was so powerfully displayed by the Americans.

To their credit, Sinitsina and Zhiganshin were able to maintain both speed and flow throughout all three and a half minutes of the dance, matching the tempo of the music even at its fastest. They still failed to reach their season best, though, and had to settle for 79.04 due to their final rotational lift being called a level three. It cost them the title.

“It was a little difficult for us today as we were in the first place after the short dance,” said 15-year-old Sinitsina. “We are not really used to that, but the important thing was just to skate clean and not to think about placement. We skated well, but we could have skated even better.
With more expression, for example.”

For the Grand Prix Final debutants it is the third silver medal they won this season.

“Everybody wants to have a medal, so we are very happy with the silver,” said Zhiganshin, 18.

Their next goal is Junior Russian Nationals in February.

“If we make it to Junior Worlds, we will be very excited,” explained Sinitsina.

Stepanova (15) and Bukin (17) posted the second highest technical score for their sultry and exciting performance to music from the Pink Panther soundtrack. The students of Irina Zhuk and Alexander Svinin captured the audience’s attention from the first seconds of their dance, and kept it throughout with strong elements and appropriately feline highlighted moves. They scored 76.35, but received a 1.00 deduction for an extended lift.

“We skated well,” said Stepanova, “but we could have skated better. There was one mistake. The result makes us very happy. We were a little nervous as we wanted to remain in the third place.”

They also focus on the upcoming Nationals.

Skating in the first warm up group teammates Evgenia Kosigina and Nikolai Moroshkin did not face as much pressure as the leading teams, and it allowed the students of Alexei Gorshkov to shine in their program to Chopin’s music.

The well choreographed routine highlighted all the best qualities in their skating – quiet edges and impressive unison – a feat for a team who has only been together for less than a year. Odintsovo’s trademark emphasis on lines also works really well with balletic style of the dance. Some elements, especially the first rotational lift and the sequence of twizzles, matched the musical accents perfectly. Kosigina and Moroshkin scored 71.62, a point below their personal best, due to a level 3 dance spin and level 2 circular step sequence. Despite finishing fourth in the free dance the team remained in sixth place overall.

Another team to benefit from the lack of pressure were USA’s Charlotte Lichtman and Dean Copely. Just as they had promised after the short dance, their entertaining routine to Beetlejuice was indeed full of character and personality, as well as original elements, which suited the style of the dance perfectly. The team received 70.84 points.

“We wanted to put all our energy and personality into our program, which we did. I am exhausted now,” said Lichtman. “It means a lot to both of us to be here. Fifth place is pretty exciting for us for our first Junior Grand Prix Final. We worked really hard to get here.”

“I got a little ahead of myself on the spin,” admitted Copely. “Charlotte was on her way out before me as she should, but otherwise we are pretty happy with our performance.”

The Americans are also looking forwards to Nationals, but plan to take some time off first.

“Nationals are five weeks away,” said Copely. “We will cool down and take some time off before it. Then we will get back to training and work on our levels and speed. We are keen to get back home and show what we learned here in Beijing.”

Russia’s Ekaterina Pushkash and Jonathan Guerreiro, who stood in a close fourth after the short dance, had a disappointing performance in which they missed the second half of the combination lift (which resulted in being downgraded to level two). The costly mistake unfortunately affected the rest of their performance to Scorchio, and they finished sixth (70.69) in the free dance and remained in fourth overall.

“We had an issue there [on the lift]” explained Pushkash. “We exited out of our spin the wrong way and then we both did not know what to do.”

The team was not affected by the fact that there were six Russian teams in the Final.

“It is a bit like Nationals,” joked Pushkash, “but not really. There is not so much competition among the teams. We always like to concentrate on ourselves during the events anyway.”