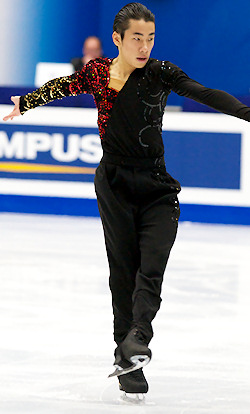 Japan's Nobunari Oda performs to Storm by the Yoshida Brothers at the 2010-11 Grand Prix Final of Figure Skating.

The main lesson of the Men’s Short Program competition in Beijing is ‘quads are back in fashion’ and they are in fact required in order to succeed.

In recent years, skaters often opted for easier triple-triple combinations and clean programs, but the Senior Grand Prix Final showed that even outstanding performers such as Daisuke Takahashi cannot make up for a lower basic value of a program without a quad.

Oda nailed his first ever quad toe loop – triple toe loop combination to earn 86.59 and leads the field ahead of Chan, whose attempt on the same combination was not successful.

With two silver medals from autumn qualifying events, Oda was the second of six competitors to perform his short program. Right from the start it became evident that this was going to be the performance to beat.

The student of Lee Barkell opened his routine to Storm by Yoshida Brothers with a nearly perfect quad-triple combination which earned +3.00 grade of execution from three judges and +2.00 from the remaining six. The only question was whenever the skater, who had been known for making weird mistakes in the past, would be able to keep the momentum.

The question was promptly answered by an equally strong triple Axel and impressive spins, but the triple Lutz out of steps received an edge call which negated whatever bonuses he might have picked up for its solid landing. The name of Oda’s music was, in fact, the best way to describe his performance: highly charged. It was a never ending movement from one element to the next with no stops to regain a breath or disrupt the impression.

The Japanese silver medalist, however, believed that he could have done even better.

“I am so happy that I won first place today and landed my first quad in the short program,” he said at the post event press conference, “but I was focused mainly on the quad. After I had landed it, I felt great, but while the performance was good overall, I could have done better transitions, for example.”

The reason for including quad, which he has successfully attempted in practices already last year, was simple: “I like doing quads,” said the 2009 Grand Prix Final silver medalist. “It is a difficult jump, but it feels great to land it. Besides, I felt that I needed it because so many skaters are doing it now.”

The decision to up the difficulty of the short program was reached after 2010 Skate America.

“I discussed it with my coach,” said the 23-year-old. “I told him that I really wanted to do it in the second half of the season. The quad was great in the practices recently, so he immediately said that it was a great idea.”

Chan is another skater who has been recently persuaded that quads are necessary for success, however, he was not able to accomplish it this time. The landing of his opening jump was not secure enough and it was even marked as underrotated. Hence, the Canadian Champion decided against attempting a combination, and instead, added a triple toe loop to a triple flip later in the program. He received 85.59, loosing to Oda on the technical mark, but beating him in program component scores which reflected the relative choreographical intricacies of the two routines.

“It was great,” said Chan at the press conference. “I am very happy and proud that I stayed on my feet. “For me it does not happen often, especially this season,” he joked. “I worked a lot on my focus and I was able to skate well, so I am proud of myself.”

The backup plan was worked out in advance.

“I always do it in practices in Colorado,” the 19-year-old explained. “If the quad does not work, I do a triple-triple combination. So it was comfortable for me. The timing on the quad was off.”

The skater is still very passionate about recently mastering the element.

“Yes, if you make a mistake on it, it is very anticlimactic and disappointing and it became a test of mental toughness,” Chan told the press. “I used to say that it was not necessary, but now that I have experience from both sides, I better understand what the others have been saying before. I do not care how many points it is worth, it is just so great to do it. It’s a blast! The build up to the jump, the intensity… and if you succeed you feel so great. I think Nobunari sees it this way too.”

Takahashi laid out the most entertaining routine of the evening, but without a quad and with a stumble during a step sequence, he was only able to score 82.57 points. However, the 2010 Olympic bronze medalist was a class apart from the rest in a very strong field in terms of presentation.

Even though the tango-themed program had almost all the required technical difficulty, including a strong triple Axel, it resembled an exhibition number more than a competitive routine. He presented it as such, paying at least as much attention to nuances of expression and hand gestures as he did to jump entrances and spins. This might, in fact, have been the reason why the spins received only a level three which further handicapped him in terms of basic value of the program.

“Compared to the short programs in the other two Grand Prix events, this was the best up to step sequence,” said the current World Champion. “I really regret this mistake on the step sequence as it was very important for the feel of the program.”

The Japanese champion said that he “wanted to try” to do a quad in the short program, but he is uncertain when he could do it. Meanwhile, he will attempt it in the long program.

The third Japanese participant of the Final, Takahiko Kozuka, fought for the landing of his jump combination and triple Axel, and therefore hardly received any ‘bonuses’ for their execution. He also hit the boards towards the end of his straightline step sequence, which resulted in a moment of confusion and affected the overall impression of his smooth routine to Soul Man. The choice of music highlights his excellent basic skating skills, but in the field with so many accomplished performers, it is hard to fully appreciate his quieter and introvertic style. He earned 77.90 points.

“I did pretty well in this high tension competition,” noted the 21-year-old. “I was nervous to skate last but I tried to stay calm. I was surprised [to hit the board]. I don’t know what happened, but maybe I was trying to pose and my skates went too far.”

“I did not really know what happened with the Axel,” said Verner. “I was so sure I would do it since it worked so well in practice. I will attempt quad in the long program.”

“It is a big experience for me to be at my first Grand Prix Final,” said Amodio. “I am upset about the mistake because I was so good in practice. I was tired after Trophee Eric Bompard, and to come here with jet lag, it was hard to stay focused.”