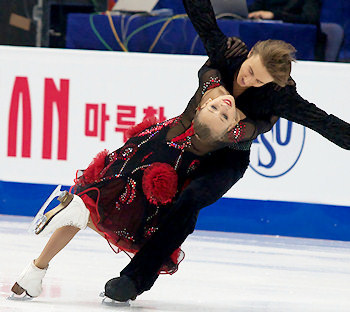 The opening event of the 2010-11 Junior Grand Prix Final provided an excellent start for the last major event of 2010. Victoria Sinitsina and Ruslan Zhiganshin of Russia surprisingly edged out their more experienced teammates Ksenia Monko and Kirill Khaliavin with a .08 lead.

All eight ice dance teams avoided disruptive mistakes. Each team brought their own touch on a combination of prescribed steps of pattern dance and required elements, producing a versatile and entertaining hour and a half. The close results among top four promise an equally engaging competition tomorrow.

Sinitsina and Zhiganshin performed a waltz to Algo Pequeñito and were fluid and inspired throughout their intricate dance, however their strongest point was the execution of all elements. They were the only team to break the 30-point barrier in the technical score and received levels four and three (for the second sequences of Viennese waltz and for midline step sequence). This allowed them to edge out their training mates Monko and Khaliavin for first place with 55.58 points in total.

“It was really a surprise [to be in the first place],” said Zhiganshin at the press conference. “I could not quite believe it then they told me in the dressing room that we are first. We have not really thought about placements coming into the event, we just wanted to skate well. We hope that we will able to skate well tomorrow too.”

The couple find the new format of ice dancing competition to be “harder, but more interesting”.

Monko and Khaliavin, who dominated the autumn events posting scores comparable to leaders of the Senior Grand Prix circuit, did not perform well in Beijing. Their dance to Édith Piaf’s Padam, padam, padam was the most mature of all presented that evening, with strong choreography and excellent style both highlighting the quality of their basic skating skills. However, their execution lacked the impact of the less sophisticated and more outgoing program by Sinitsina and Zhiganshin.

The defending JGPF champions received only a level one on the second sequence of the Viennese Waltz, but with 55.50 points they are virtually tied for the lead and have an excellent chance to defend their title tomorrow.

“What could I say,” said Khaliavin afterwards. “We did not skate well at all. We were tired. It was far from our best. Congratulations to Victoria and Ruslan. They really delivered today and deserved to win. But I can promise you that we will skate much better tomorrow.”

The team has been at loss to explain their performance. “Since our last competition in England, we tried to work on everything,” said Monko. “We have been training normally, without any interruptions.”

Unlike their training mates, they do not find the short dance to be harder than the more familiar format of the competition.

“It is not more difficult or more interesting, it is simply different,” explained Khaliavin. “But it is something we really enjoy doing.”

Stepanova and Bukin, who are third with 53.59 points, had the second highest technical score of the night. The team appeared to pay very close attention to the steps of Viennese Waltz, which affected their ability to express the character of the dance. However, the precision paid off very well in the beginning as they earned a level four for the first section. The second one was not quite as good and only received a level two, but the basic value of their dance allowed them to edge out teammates and former training mates Pushkash and Guerreiro.

Despite a slow start in which they let the power of their music and the complexity of steps overshadow their presentation skills, Stepanova and Bukin finished strong in the second half of the dance set to tango.

“We were hoping to finish third in the short dance prior to the event, but we have not really counted on it,” said Bukin at the press conference. “Today we have done our best and we are happy with both the marks and the performance. Hopefully it will be as good tomorrow.”

“We felt good about today’s performance,” added his partner. “It is our first time at a Grand Prix Final, so of course we are a bit nervous. But it felt okay to skate well.”

Unlike other teams they find the shorter dance to be easier.

“It means we have to compete one day less,” elaborated Bukin. “I guess at the beginning it was a bit strange, but now we have already got used to it.”

Pushkash and Guerreiro, who moved to Natalia Linichuk and Gennadi Karponosov in the off season, round up the final flight for the free dance tomorrow. With 53.06 points they still have chances for a medal of any color, but it would require better focus on technicalities than the one they have displayed today. The team only received levels one and two for the Viennese Waltz and level two for the midline step sequence. They did, however, display noticeable improvement in basic skating skills, and in terms of maturity, they could have only been compared to Monko and Khaliavin. This probably explains why they got the second highest program components scores.

Their dance, which was set to the same tune as Sinitsina and Zhiganshin’s (Algo Pequeñito), was strong, complex and well skated overall.

“Since the last Grand Prix Final, we have changed coaches,” said Guerreiro, “and we have been mostly working on the levels of elements. Unfortunately, since we train on a different continent [than Sinitsina-Zhiganshin], we were not aware of them using the same music.”

Levels of pattern dance also presented a problem for USA’s Charlotte Lichtman and Dean Copely, who became the last couple to score above 50 points (50.74). They only received a level two for both sequences and it was enough to push them out of the final group. The students of Igor Shpilband maintained excellent character throughout their dance set to waltz and foxtrot rhythms, and as pure entertainment, it was among the best of the evening.

“We are very excited to be here,” said Lichtman. “We had some goals to achieve and we are very happy to achieve some of them. Being here at the Grand Prix Final for the first time is definitely one of the goals we wanted to achieve. It feels cool to be representing the USA. We are happy here with our team mates Ashley Cain and Joshua Reagan with whom we train with sometimes.”

“For our free skating tomorrow, our coaches and us decided to do something different using the Beetlejuice soundtrack,” added Copely. “So you can expect a lot of personality. It’s a very charismatic free dance. It’s a creepy, quirky, grotesque program – not something you get to say very often in ice dancing.

Another team to present a dance with a lot of flavor and attention to detail were Russia’s Evgenia Kosigina and Nikolai Moroshkin. Unfortunately their dance to a playful Russian folk waltz was marred by a small stumble by Kosigina at the entrance to the midline step sequence. The team from Odintsovo received only levels one and two for their Viennese Waltz, and a level three for their rotation lift. They earned 46.98 and finished distant sixth.

Rounding up the list of competitors are Ukrainians Anastasia Galyeta and Alexei Shumski who presented a nice combination of waltz and tango. However, both sequences of waltz were called a level one.

Russia’s Marina Antipova and Artem Kudashev, displayed strong basics but not enough flare in their dance to Hijo de la Luna and Quickstep.