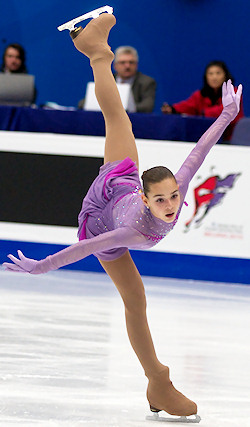 Sotnikova was the last one to skate in the long program and the pressure she was under was evident in the extremely focused execution of every move in her Rondo Capriccioso program.

Artistically, Sotnikova has skated the program better in previous events with more calm and expression than was evident in Beijing. However, the ability to deliver when a title is at stake bodes well for the 14-year-old’s future, and there is little doubt that soon she will learn to cope with responsibility better.

Technically, her focus only let her down once: she fell on a penultimate jump (triple Salchow) in her program which was supposed to be a part of a three jump combination. The rest of her routine, however, would not have been out of place at a major Senior event. An impressive triple Lutz – triple loop combination, an equally strong double Axel – triple toe loop, and three more clean triples, combined with fast and well centered level four spins, made her performance a very memorable ending for the competition. She received 112.54 points and with 169.81 in total, won the event by nine points.

“I am very pleased to have won this event,” said the student of Elena Buyanova afterwards. “I went to everything as I had planned. The next to last jump did not work, but I’m very happy about my triple-triple combination. My next goal is to skate even better next time, cleaner.”

Teammate Tuktamysheva had to overcome a shaky beginning to her program as she opened it with a fall on triple Lutz – triple toe loop combination (the technical panel later marked both jumps as underrotated). The student of Alexei Mishin also got her triple flip marked for use of the wrong take off edge – something which has never happened to her before. Otherwise she was passionate and sharp in her performance to Asturias flamenco. She did, however, get lower levels on her spins, and received 107.11 for her free skating and 160.87 in total.

“I decided not to do a triple-double, but a triple-triple, unfortunately, I missed it,” said the 13-year-old at the press conference.”Overall, I am happy with my performance.”

Despite this being her first season on the Junior Grand Prix circuit, Tuktamysheva does not find it much different to previous seasons.

“I don’t think I have learned anything special here,” she said. “For me this is jump a competition like the others and I did not think about it being at a higher level. I want to skate well at any level.”

She also was not upset about the mistake.

“I am not upset about the fall too much,” said the reigning Russian bronze medalist. “I think the mistakes only show me what I have to work on. It pushes me to work harder. There is no limit to perfection after all.”

Tuktamysheva is working on her triple Axel, but is vague about when she plans to include it into her programs.

“I am working hard on it, to improve my consistency,” she said. “With the [level of] competition [being so high] I think I will need it soon enough.”

After a disastrous performance in the short program, USA’s Christina Gao did a much better job in the free. She was the only skater besides Sotnikova to land a triple-triple combination (flip-toe loop in her case), but the landings of several other jumps were not secure enough. She fell out of a double Axel and triple flip landing, and received an edge call on a triple Lutz. Otherwise her program to Yellow Concerto has been among the most challenging of the night, packed as it was with complex connecting moves and constant flow from one element to the next. She received 101.03 points to finish third in the long, but was only sixth in the overall standings.

“I am still not at my best, but I am happy that I landed my flip-toe,” said 16-year-old Gao. “It is better than yesterday. My double Axel was a bit swingy. This is something to work on when I get home.”

“I think I am a better skater this year,” she added. “The pressure was on because I medalled last year. This year I have grown mentally and focused on finding my zone. For the nationals I will train for my Senior program and hopefully training will go better as it has been tough so far.”

Li delivered a very smooth and soft program to Until the Last Moment by Yanni, and was able to win a medal despite finishing outside the top three in both programs. She did not attempt a triple-triple combination, but landed a clean double Axel – triple toe loop. She went for six other triples, but her second triple flip was marked as underrotated, and a triple Lutz received an edge call.

The student of Mingzhu Li also made a costly mistake at her final element: she planned to do a flying camel spin, but ran out of time and replaced it with an upright spin which received zero points as she had successfully executed a level four layback before. The Chinese bronze medalist received 100.20 points, and with 149.82 in total, was tied with Risa Shoji of Japan. However, the tie was in her favor as she placed higher in the free skating.

“She skated an almost perfect program,” said the coach. “I am very proud of her.”

“I am very satisfied with the performance today,” said the 13-year-old skater. “I was not able to prepare so well because I have only learned that I was competing a week ago. Plus I had also been injured until last week, so I did not have so many practices. It was only this week that I have recovered and was able to train in full. I did so well in these two days that I am very happy with the way I skated.”

Regarding her final spin, Li said, “The time was up. I could not do it and avoid a 1.00 time deduction.”

Shoji skated a clean program to music from The Lake House and The Cider House Rules soundtracks, but the technical panel downgraded four of her harder triple jumps. In the end, she only got full credit for a double Axel – triple toe loop combination, triple Salchow, and triple toe loop – double toe loop – double toe loop combination. Nonetheless, her performance was a very impressive start to the final flight and was highlighted by strong basic skating skills and nice spins.

“I am not satisfied with today’s performance,” she said afterwards. “I could not do my jumps perfectly. It was a very good experience to compete in big international events, but every competition is different and it makes me nervous each time.”

Russia’s Polina Shelepen, who stood third after the short program, slipped to fifth place overall. The student of Eteri Tutberidze began with two solid double Axel – triple toe loop combinations, but had a painfully-looking fall on a triple Lutz afterwards which nearly ended up in a split. Later, she had to fight for the landings of all other jumps in her program. This affected the overall impression of her Russian folk routine, which required upbeat execution and a lot of attack. She only scored 94.11 for the free skating and had 137.47 in total.

“During the warm up two hooks on her boot broke,” explained her coach.”We had to fix it with tape. We only had 3 minutes to fix it. She is very upset. She could not skate that well.”

USA’s Yasmin Siraj was able to recover some ground after a disastrous short program and started well with four clean triple jumps, even though she was forced to change her planned double Axel – triple toe loop combination to a double – double. The student of Mark Mitchell ran out of stream towards the end of the program, and missed the last two jumping passes. She finished seventh, one point ahead of teammate Kristiene Gong, who was only able to produce three clean triples.