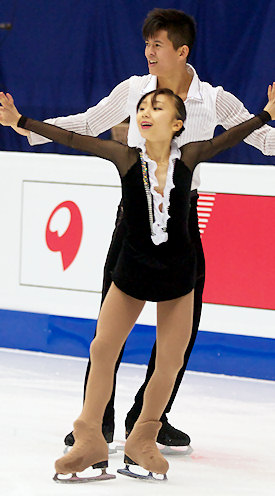 The final event of the first competition day at the 2010 Junior Grand Prix Final promised to be an interesting competition between teams – some of which have already tried to compete at Senior events. However, despite the overall excellent quality of some routines, none of the couples managed to avoid mistakes.

Takahashi and Tran, medalist of two Senior Grand Prix events and the first alternates for the Seniors Final, performed an intricate and inspired program to Feeling Good. However, Takahashi fell on the opening side by side double Axels.

Otherwise the Japanese were clean and picked up impressive grades of execution as well as a level four for their high lateral double twist to earn 53.94 points for a comfortable lead over their closest rivals from Russia.

“It was not perfect,” admitted Tran afterwards, “but we really focused on the elements tonight.”

His partner prefers to treat her mistake as a part of a learning curve.

“The most important part was not the mistake,” Takahashi claimed, “but the way we skated afterwards. I think it will give me confidence to skate clean after I make mistakes. Not that I want to make mistakes,” she quickly corrected herself, “but now I know that even with a mistake I can still skate a good program and impress people.”

The team credits their experiences on Senior Grand Prix circuit for their maturity.

“It was hard to compete in both,” admitted Tran, “but we got used to it and managed well. We learned how to rest between competitions. We have also learned how to remain composed during the event. Sometimes you see even very strong teams making mistakes, but they still continue to perform on the same level and we have learned it, I hope.”

“We have learned a lot,” added Takahashi, “especially from teams like Pang and Tong and Kavaguti and Smirnov. They all looked so relaxed during the competition, focused of course, but still relaxed. Not excited like us. It made me different.”

Stolbova and Klimov were last to skate out of eight teams, but even though in terms of overall quality their Flamenco was only comparable to Takahashi and Tran’s program, they made too many mistakes to seriously challenge the Japanese team (49.63). First, Stolbova fell on double Axel, then the skaters ran into each other during the straightline step sequence and were not able to execute the change of the positions. They also lost unison on a side by side spin and only received a level one for their death spiral.

“Overall, it was the worst performance of the season,” summed up Klimov. “We are not happy at all. Maybe we were just nervous or maybe it’s the fact that Ksenia has been sick shortly before the event.”

The team, however, was solid in practices and believes that their performance might have also been affected by the withdrawal of Wenjing Sui and Cong Han (who moved up to the Senior Final).

“Perhaps we were not focused enough because one of our main rivals, the Chinese, were not here,” added Klimov. “I guess we were too relaxed or maybe we felt too much pressure knowing that it has become easier for us. Of course we wanted to show our very best.”

The students of Nikolai Velikov, also competed at a Senior Grand Prix event, but failed to win any medals. Still, they say that they liked the challenge.

“It was interesting,” said Stolbova. “We liked it a lot, gained some experience. We had very strong rivals, many of them now compete in the Senior Grand Prix Final.”

Third place went to the Junior Grand Prix Final debutantes Steele and Schultz from Canada. Skating a lyrical program to Ennio Morricone’s soundtrack from Malena, they were mostly clean, executing side by side double Axels and a level two double twist. However, Steele put a hand down on the landing of the throw triple toe (48.07).

“We did very well today,” said Steele. “We had no expectations regarding our placement, we only focused on the way we want to skate.”

“We were very relaxed,” added Schultz. “We just let the things happen, focused on performing the program overall, and let the elements fall into places.”

A notch below them are fellow Canadians Natasha Purich and Raymond Schultz, who performed an upbeat and engaging program to Zorba the Greek. The team executed all risky elements clean and had a great chance to finish in the top three, but Purich fell during the side by side step sequence and they only received 45.30 points.

“We have only been together since spring 2010,” said Purich, “but through a lot of hard work and good coaching, we have made it to the Junior Grand Prix Final. We are really happy with our score and program. I got caught up and tripped, but we believe that our level of skating was higher than in training.”

Skating to Club to Death from The Matrix soundtrack, USA’s Ashley Cain and Joshua Reagan also started the program well, but Reagan later stumbled out of a double Axel landing. They scored 43.92 points and are currently fifth.

Home crowd favorites Xiaoyu Yu and Yang Jin of China ran into unexpected trouble with the technical panel. The couple performed a very intricate program which was packed with all kinds of transitions. Apparently one of the ‘dance’ lifts looked like a pair skating lift for the discerning panel. As a result their actual pair lift later in the program was cancelled as a repeated element and received zero points. Despite skating an almost clean program, they are only sixth with 43.68 points.

The team was at loss to explain what has happened. “Everything went as planned,” said Jin. “We did the same program in previous competitions and we never had a problem.”

Rounding up the list are Canada’s Brittany Jones and Kurtis Gaskell (42.34) who replaced Sui and Han in the Final, followed by Russia’s Anna Silaeva and Artur Minchuk (35.25). Jones fell on an underrotated double Axel and the team picked up very low levels of difficulty. The Russian couple has a disastrous outing which included a fall on Axel, an aborted lift, and stumbles during step sequence and the final spin.