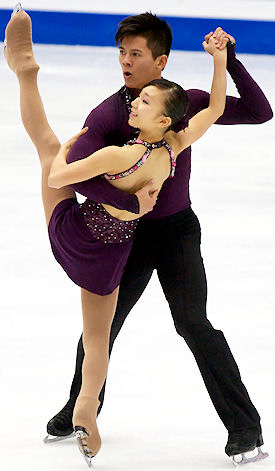 Skating last, Takahashi and Tran were not flawless. Narumi fell out of a triple Salchow landing and later had trouble keeping her balance after a throw triple toe loop, but all other elements, including an impressive level four double twist, were good. Their sharp tango to El Di Que Me Quieras by Raul di Blasio was one of the highlights of the event, and the couple picked up 105.58 points in total.

“It was a solid performance,” added Tran. “We are very happy. I felt like I have been interpreting the music better than ever before.”

The couple felt that they have achieved a lot this year.

“The season went better than we expected,” explained Tran. “We did a great job at the Senior Grand Prix events, and winning Junior Grand Prix Final is an icing on the cake.”

The team plans to do both Junior and Senior World Championships.

“We have already done five events,” joked Tran. “Two more are not going to hurt.”

For the Pairs Final, they are going to root for Qing Pang and Jian Tong from China.

“They are so graceful and smooth!” exclaimed Takahashi.

Stolbova and Klimov delivered an entertaining performance to Nino Rota’s La Strada. Stolbova had a hard fall on her triple toe loop, but otherwise they were clean.

“I really wanted to make up for the fall in the short program,” she explained. “Perhaps, I was trying too hard. The fall hurt, but what can you do. You cannot stop. You have to continue the performance. On the positive side, we have pulled ourselves together and fought through the program.”

The students of Nikolai Velikov have made tremendous improvement in presentation skills since last season, and the scores (they were the only other team to break the 100-points barrier here) reflected it. The team has gained so much confidence that they now use side by side double Axels as a choreographic highlight. They do it as penultimate element in their routine, and when done clean (as was the case in Beijing), it provides a very satisfactory conclusion to the program which is full of complex transitions and great character.

They were, however, disappointed with themselves.

“It was not our best competition here,” said Klimov. “It was in fact the worst we have done this season. It is a good thing that we have missed only one element and we are happy with our placement, but we could have skated better.”

In the evening they will support the Savchenko and Szolkowy from Germany, and “of course, the Russians.”

Yu and Jin skated an intricate routine to Nino Rota’s Romeo and Juliet, but while the difficulty of their transitions was among the best of the night, the program would have benefited from a better connection between the skaters. The Junior Grand Prix debutants landed impressive side by side jumps: a sequence of two double Axels and a triple toe, but Yu had an uncharacteristic fall on a throw triple loop and the team was way out of unison during a parallel spin. Still, they posted the highest technical score of the night and improved their best to 96.90.

“Overall  we worked hard and it was ok,” said Yu. “We have a lot to improve, but it was better than the short program. I was disappointed to fall on the throw triple loop. We can skate better. We were a little nervous after the short program, but I am very happy about our overall performance, especially about our triple toes. After the disappointing result yesterday, we really wanted to do well today.”

“We can improve,” agreed Jin. “I think we got a lot of support from the crowd.”

The team draws inspiration from their training mates Sui and Han who are competing in in the Senior Final.

“We train together and spend a lot of time together,” said Jin. “We watch them train, we watch them get good results, and they inspire us. They have had a lot of success and their elements are more difficult than ours. Their technical elements are very good. We learn a lot from them and we want to improve our difficulty. We are training hard and we are working on a quad twist.”

Canada’s Brittany Jones and Kurtis Gaskell, a last minute addition to the roster, delivered a sweet and charming program to My Fair Lady to finish fourth in the long program and sixth overall. The students of Lee Barkell showed amazing ability to think on their feet. After Jones fell on a double Axel, they were not able to execute a planned combination with double toe, but recovered to add a second jump to their side by side double flips later in the program.

Jones and Gaskell were also the only team in the Junior event to execute a level two triple twist (two other teams who attempted the element only received a level one). As a result, they improved their personal best in the long program by seven points (to 88.70) and the overall by five (131.04).

USA’s Ashley Cain and Joshua Reagan finished fifth in the free skating and overall. The team from Texas, who skated to Tchaikovsky’s Romeo and Juliet, landed strong triple Salchows and an impressive sequence of double Axels in the second half of the program. However, Cain fell on a throw triple flip and the couple struggled with their final level five lift which received a level three. The team also only earned a level one on both a death spiral and double twist. They scored 131.96 (88.04 for the long).

Taylor Steele and Robert Schultz of Canada, who stood in third after the short program, had a disappointing performance in the long. The team was unable to execute clean double Axels, and their other jumping element was a double flip – double toe loop – double toe loop which resulted in a lower basic value of their program. As a result, there were unable to compensate by strong execution of the elements. Steel fell on a throw triple toe loop, and the overall quality of their skating was not as good as that of the teams who placed ahead of them. With 85.01 points for the free skating and 133.08 points in total, they slipped to the fourth place overall.

“Of course we were nervous [after finishing third in the short],” admitted Steele, “but we came to this competition with no expectations of a medal. We just wanted to do two personal bests, to keep focus, and have two good performances.”

Teammates Natasha Purich and Raymond Schultz slipped to seventh place overall with only 81.72 points for the long program after costly mistakes on jumping elements. Purich put a hand down on the landing of tripe toe loop, fell on a throw triple Salchow and double Axel, and later struggled to keep the balance on the final throw triple toe loop.

“It was not our best,” admitted Schultz, “but it wasn’t our worst either. We have only been together for seven months, so just to be here is pretty amazing.”

“I just focused on getting up [after the fall] and getting through the program,” said Purich. “Now we will root for our favorite pair, Kirsten Moore-Towers and Dylan Moscovitch, to do well in the Seniors Final.”

Russia’s Anna Silaeva and Artur Minchuk remained in the last place after an error-filled performance.