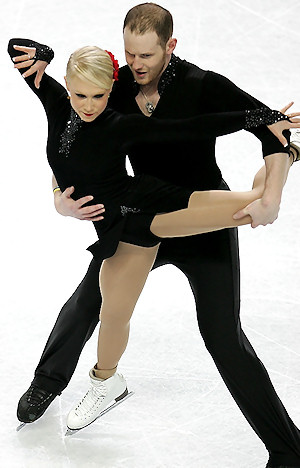 Caitlin Yankowskas and John Coughlin currently lead the pairs after the Short Program at the 2011 AT&T U.S. Figure Skating Championships.

The year after an Olympic Games is typically a time of rebuilding for the US Figure Skating Team. Skaters who have been around for a while move on to other ventures, the inevitable team splits often littering the pairs and dance fields, and new teams form hoping to make the best of a weakened field.

In the first senior competition at the US Championships, there was no evidence of a fall in the level of quality among the pairs entries. In fact, it looked more like a group of skaters hungry to prove that they are ready to contend for medals both here and at international competitions.

Caitlin Yankowskas and John Coughlin, the charismatic duo that train with Dalilah Sappenfield in Colorado Springs, won the short program with a passionate and sexy tango that is the antithesis of their usual style.

“At first we were going to skate to Doctor Zhivago,” Yankowskas revealed. “It was perfect. Almost too perfect. When we got back from working with Marina Zueva on choreography, our coach called us like at 6 AM and said that she really wasn’t feeling this program. She wanted us to do a tango.”

“(Doctor Zhivago) would have been another cliché John and Caitlin program,” Coughlin added. “Don’t get me wrong, we love the work that we did with Marina. It was a beautiful program, but (Sappenfield) wanted us to step out of the box and try something new this year.”

The leaders, fifth in last year’s championships, attacked their Tango Oblivion program with sexual tension that almost transported the audience to some smoky bar in Buenos Aires. Their technical elements were flawless, earning positive grades of execution on each one.

“(Our coach) likes to kick our butts when we train,” Yankowskas said sheepishly. “This year when we train, we train clean programs, and our coach drilled our jumps. We train jumps and throws together, and with that we built a lot of confidence so that no matter what happened in competition I could do what I trained.”

Yankowskas and Coughlin drew huge applause from the audience with their nearly perfect side-by-side spin, and earned a total of 64.30 points for their efforts.

“I like being chased rather than chasing,” Coughlin said with a fire in his eyes. “I think everybody prefers to be in the lead. We still have a lot of work to do. We’re only a third of the way through this competition, and the second two-thirds counts for a lot as everybody knows.

Coughlin, whose mother passed away last winter, is looking forward to that second two-thirds more than any other program he has skated in his career.

“It’s been a wild year. I’ve been telling people that I have been knocked down in every way that a person can be knocked down,” Coughlin said solemnly. “Caitlin, Dalilah, and her son Larry encouraged me to take on our Ave Maria freeskate. Dalilah especially felt like it would be very therapeutic for me to face some of that stuff on the ice every day, because the natural thought would be to block it out. It was very rocky there at first, but I think that it also at the same time what is making our program special this year. The feelings that we are portraying are very, very genuine and close to home for us. I said earlier in this week that Caitlin and I have nothing to be afraid of anymore, and I think that makes us very dangerous people to not be afraid to face anything.

Finishing just behind them in second place are Olympians Amanda Evora and Mark Ladwig, who also skated a program that normally would not be associated with their classical and romantic performance style.

“After the Grand Prixs, we reevaluated our program, and decided that it would be best to change our music,” Evora explained. “We decided that we needed to find a piece that was still opposite from our long, but also seemed to synch up with our personalities.”

Ladwig, who takes credit for selecting the music added, “I think that this program shows our love of skating a lot better. We loved the (previous Latin short program), and we received good reviews domestically, but this is in more of a realm of comfort that we could bring out and make better.”

Evora and Ladwig performed with a newfound confidence that the duo realized as a result of their successful season last year.

“Making the team last season was like a Sputnik moment,” Ladwig said with his usual playfulness. “It really brought out what confidence we do have.”

Evora agreed. “I feel that the confidence was always there, but to make it a reality is another thing. There are many teams and skaters who have the same capability to do what we did, but to know that we went out there and were able to do it in the moment is kind of why I thought it was important to keep skating this year. We can make a difference by training and just being here, and keeping the level of skating high.”

The only flaw in an otherwise perfect program was a slight touch down by Evora on the throw triple loop. For their efforts, Evora and Ladwig also earned a new personal best score of 62.87 points.

“It was nice to get this program out there for the first time, and skate a really good performance,” Evora said happily. “It’s also nice to know that we have room for improvement for our next performance.”

Finishing in third place is the new team of Mary Beth Marley and former National Champion Rockne Brubaker, who looked solid in their US Championships debut.

“You know I don’t really call it nerves. I think that I was just really anxious,” the pint-sized Marley said confidently. “The elements that we have been doing really well in practice, I just really wanted to put them out in the program.”

Marley, who is brand new to pairs skating, somehow performed like a seasoned veteran, and recovered well after a small glitch on their opening triple twist attempt. The partnership, Marley explained, began as somewhat of an inside joke to those close to her.

“I never really gave pairs a second thought,” Marley explained. “I told my friends and family that I would only skate pairs if Rockne became available. It was kind of a joke at first, and then when he was looking for a partner, I thought that I should follow through on my promise.”

Skating to music from the Elizabeth soundtrack, fifteen-year-old Marley and twenty-four year-old Brubaker, packed their program with world-class difficulty, but still have room for improvement on the program components. Their total of 58.10 points sets them up for a possible medal after the freeskate on Saturday.

“I think that in most cases, being new is difficult in any circumstance,” Brubaker admitted. “But in this case, we had all of the right tools – Mary Beth’s dedication and ability and the guidance of our coaches. We keep improving our score every time we skate, and that is all we’re trying to go out and do.”

“It’s been more of a challenge this year,” Barrett said of attempting to defend their national title. “(Coach John Zimmerman) has been trying to help us through it. He has prepared us very well for this competition, and I think that we were ready for this.”

Usually unflappable, Denney fell on the solo triple toe jump, and also struggled to get in to position for the back inside death spiral.

“It’s a little disappointing for us,” Barrett said matter-of-factly. Two days ago in our practice, we did a really good short, and it was unfortunate to miss the jump. Everything else, though, was pretty good.”

Denney chimed in, “My typical mistake is to get a little bit ahead of myself and rush things. I think that (in Saturday’s freeskate) I will stay more relaxed and stay calm, and do more of what we do every day. It’s sort of a weird mistake for me, but it happens.”

Although visibly disappointed after their skate, Denney and Barrett took the mistake in stride, and plan to fight back in the freeskate on Saturday.

“We still have the long on Saturday, and it has been going really well for us so far this season,” Barrett proclaimed. “We still have a chance to move up and accomplish our goals here.”

“This is the first time that we have completed a clean short,” Vise said after the skate.

Her partner continued, “We’re happy with the levels we got. I think that these are the best that we’ve ever gotten on our elements. We completed everything, and we’re just happy to get it all out there.”

Vise, who was recently diagnosed with plantar fasciitis, was unable to walk let alone jump as recently as Monday. Both she and Baldwin were ecstatic with how the program turned out, and were even more pleased with their personal best score of 54.29 points.

“They are giving me a numbing shot before I skate for the pain,” said the injured Vise. “This morning on the warm-up, I didn’t get one, and I did one jump and one throw. I did everything, but it was a little bit of pain. It’s healing fast.”

Vise’s coach Doug Ladret also added, “There are also two pockets of fluid around the tendon right near that which is causing a lot of pain.”

Finishing in sixth place are 2009 Junior Worlds bronze medalists Marissa Castelli and Simon Shnapir who struggled on their opening triple Salchows and triple twist. The duo salvaged the program with strong elements to finish the program, and earned 51.48 for their money-themed program.

The new pairing of Lindsay Davis and Themistocles Leftheris finished in seventh place, while another first-year team, Becky Bereswill and Trevor Young finished in eighth.