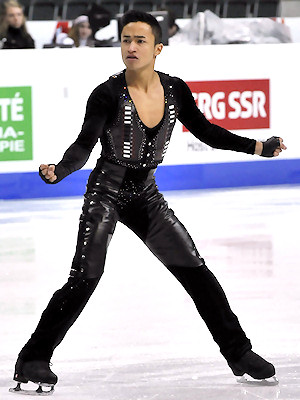 Florent Amodio of France currently leads the men after the short program at the 2011 European Figure Skating Championships.

Florent Amodio of France led an upset of the young generation in the Men’s short program as veterans faltered. The 20-year-old Amodio won the short ahead of also 20-year-old Michal Březina of the Czech Republic and Russia’s 17-year-old Artur Gachinski.

Amodio was to skate next to last out of the 28 competitors, and made a statement with a crisp performance of  his program to Once Upon a Time in Mexico. The triple Axel, triple Lutz-triple toeloop were spot on – only the triple flip received an edge call. His flying camel and change sit spin were graded a level three as well as the circular steps, and the combo spin was a level four. The Frenchman achieved a new personal best of 78.11 points.

“My hard work paid off,” Amodio commented. “I’ve worked like crazy in practice. Now there is still the free on Saturday to come and I have to stay calm.”

“To be in first after the short is magical for me at my first Europeans,” he continued. “I won’t let myself get carried away and I will stay focused for the free program. This short program was a special program. It is different from the free skating, where I allow myself to play with the audience more. As it is my first Europeans, it was very important not to make any mistakes in the short program and to stay focused and to stay in my bubble.”

“It (the free skating) will be a good battle,” Amodio summed up. “I have already forgotten that I placed first in the short program. Tomorrow I will go to training and do my job. I will try to stay clear in my head and take it step by step.”

Březina turned in an excellent performance to Kodo Drums, showing off his clean technique and feeling for rhythm. He hit a triple Axel, triple flip-triple toe, a triple Lutz, and was awarded a level four for two spins, but the combination spin was a level two. The 2009 World Junior silver medalist picked up 76.13 points.

“I’m very pleased because I couldn’t skate the whole season,” the Czech skater said, referring to him missing the Grand Prix series due to injury. “This was actually the first big competition for me. I really worked hard the last three weeks in Oberstdorf. With my coach we did the best to get back in the state I was last year. Now I’m just happy because I skated well.”

“It will be a good battle between us,” said Březina of the free skate, “but that’s not what I’m concentrating on. Tomorrow I’ll concentrate on myself to do a good training and to do a good skating on Saturday evening. I just want to show that I’m able to perform as I did last season. I really will enjoy this. I’ll do my best to stay (in this position) or to get even better.”

While Amodio and Březina were regarded as contenders due to their success in the Grand Prix and last season respectively, Gachinski was a surprise in third place. The student of Alexei Mishin produced a quad-triple toe and triple loop, but he lost a few points as his position in the change sit spin was too high and the element received no value. His triple Axel had a lean in the air, but he saved it. The teenager collected a seasons best of 73.76 points, a seasons best, for his routine to Money and The Great Gig in the Sky by Pink Floyd.

“I have positive emotions right now,” offered the Russian. “I am happy to be in this position at my first serious competition of the year. It was hard in the beginning, but then I pulled myself together and then the inspiration came. Hopefully I can hold on to it or even move up.”

“For the free skating, I just want to go out and to do the same that I did today, not more,” said Gachinski. “I don’t have to do anything else.”

Gachinski still is bothered by a knee injury sustained in a nasty fall at Nationals in December.

“It was a contusion and it is still bothering me,” he explained. “I’m still in pain sometimes and I had to leave out seven practice sessions at home in St. Petersburg. It is better now.”

Kevin van der Perren turned in a dynamic performance to Art of War and hit an excellent quad-triple toeloop combination, a triple Axel and triple Salchow, but the combo spin was only a level one. The two-time European bronze medalist posted a seasons best with 73.61 points.

“I am really happy with the performance,” said the Belgian. “It was the first time I had a quad in the short program and it went well. The quad and the Axel were the highlights of the performance. I wanted to quit last season, but the results were too bad so I continued to compete this season. I don’t know if I will compete at the Worlds, it depends on the results. I would like to end it on a high note.”

“The Euros are the most important competition for me,” concluded van der Perren. “I know I can’t compete at the top at the Worlds, but at the Europeans I have a chance. I was planning on putting two quads in the free program, but it is a big risk.”

Czech skater Tomáš Verner fell on his triple Axel, but nailed the triple Lutz-triple toe and the triple flip in his playful routine to Singin’ in the Rain. Overall, he did not appear as relaxed as in the Grand Prix events. His flying camel was slow and garnered only a level two. He scored 72.91 points to finish fifth and remains in contention.

“Until yesterday I jumped it (the Axel) well in practice,” said Verner. “Only today in practice and in the warm up I started to have problems with the Axel. I came to this Europeans with high expectations – after all, I have already been European Champion. I’ve improved this season step by step and at least I wanted to keep my level. The goal of course was to compete with the top skaters and to skate in the top group.”

“I want to earn a standing ovation from the audience for my performance (in the free skating), but to achieve that I have to show a special performance,” Verner added.

Samuel Contesti had a wobbly triple Lutz-triple toe combination, but the triple Axel and triple flip were fine. With 72.78 points, he came in sixth.

“It was a good program but difficult to skate because I was very nervous before,” the Italian admitted. “I had a difficult summer last year and I just started the training in the end of September. So there was just one month left before my first Grand Prix.”

Three-time European Champion Brian Joubert had an off-day. He first did a three-turn out of his quadruple toe and only managed to add a double toe for his combination. The triple Axel was okay, but then the Frenchman crashed on the triple Lutz. In seventh place with 70.44 points, he even failed to make the final warm up group. The fall on the Lutz upset him most of all.

“This triple Lutz is really annoying,” said a frustrated Joubert. “It is like I’m blocked. I had no problems in practice, and I did a perfect one in the warm up. I’ve had so much bad luck with this jump. I injured myself twice. It’s always the same with this triple Lutz. I fall on it and always in the short program. It is not a technical problem but a psychological problem. If I had fallen on the triple Axel or on the quad, I wouldn’t feel as bad about it. I am very disappointed. I have worked very hard and this program didn’t show what I’ve done.  I just want to skate a strong free program, and it doesn’t matter if I medal at the end or not.”