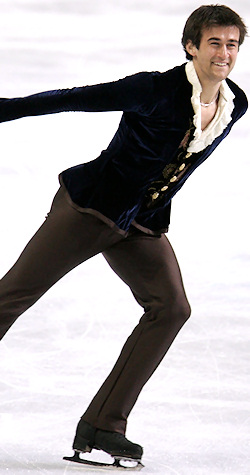 It wasn’t the skate that twenty-seven-yea- old Ryan Bradley had in mind when he decided to return to competitive ice three months ago, but the result was exactly what he had hoped to do. With just the fourth best freeskate of the evening, Bradley had enough reserve left over from the short program to clinch his first US Championships title in the senior division.

“Today’s was a really hard program. It wasn’t the way that I pictured it,” said the unusually solemn Bradley. “It wasn’t what I trained for every single day.”

Bradley opened by attempting and making mistakes on two different quadruple toe loop jumps, and it was clear that the 1999 US Junior Men’s Champion would have to fight through the rest of the program in order to have a chance at the title.

“I missed my first two jumps, and if it had been practice, it would have been one of those times when I went over to the side of the boards and restarted the music,” Bradley confessed. “I fought so hard and nothing was pretty, and it was probably the ugliest national championship program ever. But you know, I love it because of it, and I had to work hard to get it.”

The audience came through for Bradley, cheering him on throughout his comedic Mozart program, and fueling him to a seven triple jump performance. It was clear however from his protocol sheet that Bradley has much work to do, receiving a level two on his step sequence and his closing spin. For his efforts, the champion earned 231.90 points in the competition, winning by more than five points.

“I didn’t think that I had won,” Bradley admitted to thinking after he finished his skate. “But I never thought ‘Oh wow, I blew it’. I remember after I made my mistakes that I thought I should do something funny so that they would forget that I made them.”

The surprise of the evening was nineteen-year-old Richard Dornbush, who moved up from eighth place after the short program to win the silver medal in his second US Championships.

“It felt great. I won’t lie – that was amazing,” said the 2010-11 Junior Grand Prix Final Champion. “I didn’t let the excitement get to me until I started the last footwork. Once I got through that I realized ‘hey I don’t have any jumps left, there’s no reason to not go crazy and celebrate.'”

Dornbush skated with the maturity of a seasoned competitor, attacking each element in his Sherlock Holmes program with gusto. In landing eight triple jumps, the southern California college student won the freeskate, and established himself as an early frontrunner for the 2014 Olympic Team.

“I think that there is a certain danger in getting into the character of a program too much,” Dornbush explained. “It can sometimes make you lose your focus on the athleticism of the program, but it’s certainly something that I enjoy and something that I enjoy practicing, so in that aspect, I really think it helped.”

Dornbush’s total of 225.56 points qualified him for his for World Championships team, and the humble skater gave much credit to his thirteen year coach, Tammy Gambill.

“Tammy is just a great coach,” he said rather proudly. “We have such a great relationship, and I’ve always been very respectful toward her, and I think anybody that sees that you are showing them respect and are willing to work with them, I think that’s a relationship worth holding on to.”

His coach admitted to becoming overwhelmed with his performance.

“Right at the end after he finished his last jump and sort of let go, I got emotional,” she confessed. “Yeah, I was crying, I have to admit it.”

Finishing with the bronze medal was twenty-year-old Ross Miner, who was competing in his senior nationals debut. After finishing in sixth place in the short program, the 2009 US Junior Champion stepped up in a big way, earning the second highest marks in the freeskate.

“I couldn’t be happier,” Miner said after his skate. “I don’t remember too much– I was just taking one element at a time and just moving on after each element.”

Skating to a character driven program to music from the film Casa Blanca, Miner drew laughter from the audience as he poured himself and an imaginary cocktail and downed it at center ice.

“I’ve never received a standing ovation at nationals before,” Miner shared enthusiastically. “That was amazing.”

Like Dornbush, Miner landed eight triple jumps, and was rewarded with 224.35 points in the competition. He will join Bradley and Dornbush on the 2011 US World Championships team.

After a disappointing freeskate to music from the film Life is Beautiful, two-time and defending champion Jeremy Abbott had to settle for the pewter medal.

“It’s been a rough season for me,” Abbott admitted. “I’ve been having boot problems, and I haven’t quite adjusted.”

Abbott struggled with the landings on three jumps, and received downgrades on two. After falling on a triple Lutz attempt, the Detroit-trained Abbott tried to earn lost points by tacking on two double toe loops on the end of a triple loop.

“I had to take some extra crossovers going into the Lutz, and it just never went up,” said the pewter medalist. “I tried to put a double-double combination on the triple loop – it’s not usually that combination.”

Last year’s Four Continents Champion Adam Rippon moved up from ninth place after the short program to finish in fifth place overall with an inspired freeskate.

“It was very hard to skate today, but I was really fortunate that we had a day between the short and long programs,” said the curly-haired Rippon. “Although it wasn’t perfect today, it was really great to skate a nice strong program. The reign of bad programs and my evil twin didn’t show up today.”

In landing seven triple jumps, Rippon had the third best program of the afternoon, and earned 220.04 points for his efforts. Rippon will have a chance to defend his title at the Four Continents Championships, joining Abbott and nineteen-year-old Armin Mahbanoozadeh next month in Korea.

Mahbanoozadeh had the most successful skate of his young senior nationals career, landing eight triples in his Avatar program, and finished with 215.05 points in the competition.

“I was really happy to put out a performance like I have been doing in practice,” a relieved Mahbanoozadeh shared.  “I see this as a stepping stone, and I just want to keep building on this to get better and better.”