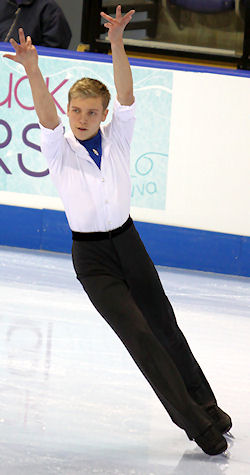 Garrett Gosselin (SK) is off to a great start. After a clean short program, he is in the lead with 57.55. His triple toe loop-triple toe loop combination was a little tight, but he got the rotations done, and the rest of his waltz program was gorgeous.

Gosselin has strong basic skating, which was reflected in his first-place program components scores. His technical content was not the strongest in the field, but the 18-year-old has set himself up well for the free skate if he can continue to skate cleanly.

The dynamic 12-year-old from British Columbia, Nam Nguyen, delighted the crowd with an electrifying performance to Smooth Criminal. Nguyen opened with a solid triple Salchow-triple toe loop combination and never looked back. His choreography emulated some of Michael Jackson’s trademark moves and elicited cheers from the audience. His solid elements were delivered with a lot of personality, and if he can keep up the great skating in the free skate, he is in great shape to better last year’s bronze medal.

Shaquille Davis (CO) hit the only triple Axel in the event, and it ended up being one of the strongest elements in his 54.41-point short program. His tango short program probably would have ended up on top of the standings if not for a slipped entrance into his combination spin, which dropped to a level one and was hit with negative Grade of Execution (GOE) as well. With the toughest technical content in the field, Davis is still in a great place to move up in the free program if he skates well.

Although Peter O’Brien (EO) fell on both his solo triple loop and his triple-triple combination, the rest of his elements and his strong skating skills were enough to keep him in fourth place. O’Brien, who also chose a tango program for his short, has 45.24 points and is currently nine points away from the podium.

Iassen Petkov (CO) is in fifth place with 44.79 points. Although he got his jumps done, the landings of his triples were not quite clean and he too, struggled with one of his spins. Petkov’s program to Fellini music has a lot of personality, though, and he performed well aside from the technical mistakes.