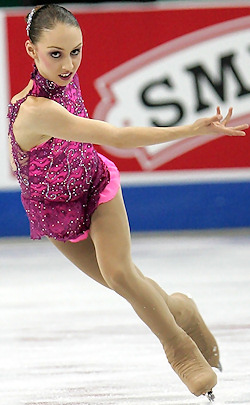 The question on everyone’s mind is this: Can Courtney Hicks be the skater that we’ve all been waiting for? No disrespect to the USA’s crop of senior ladies who have achieved quite a lot in their days, however, this is a country that produces champions on the world and Olympic level, and no U.S. lady has medaled on the world level since 2006.

Coach John Nicks calls Hicks the most athletic skater that he has ever coached. His latest prodigy captured the junior ladies title in Greensboro on Wednesday night with the highest total of any junior ladies champion since the code of points has been introduced. Hicks scored 173.22 points, nearly twenty points more than the silver medalist.

“That was my best skate of the year,” Hicks gushed proudly after the competition. “That was the best program clean-wise that I have ever done.”

Hicks opened with what is becoming a signature move for her- a triple flip-triple toe loop combination for which she received a whopping 10.40 points. In all, she received full credit for four others, and even earned positive grades of execution on each one.

“It was really exciting to get the triple-triple clean, and then get the Lutz, too,” the champion said. “Winning is really awesome because I have been trying for a really long time to get first place at nationals, so it is nice to finally make that happen.”

Hicks’s Malaguena program was not without mistake, however, leaving points on the table on both of her triple Lutz attempts. Neither Lutz was landed with a correct edge for which Hicks received an edge call from the Technical Specialist, and on the second, she fell.

“Unfortunately I fell on the last jump, but that’s okay because everything else was good,” Hicks shared. “I was really excited because I did everything else in the program, and then I forgot to do a step to get on the right pattern so I fell.”

The new champion finished in fifth place last season at the U.S. Championships on the novice level, but despite her inexperience, Hicks believes that she can handle the impending pressure of such a strong competition.

“I think that I will be able to handle the pressure well because I have a good coach who has been through a lot of this before,” she said with maturity. “Also, I think I will be able to keep training and work the same as always.”

Nicks thinks that his student’s success was inevitable, remarking about how strong a competitor Hicks has become.

“She doesn’t let the nerves get to her,” Nicks explained. “She is very prepared, and as well all know, it is the prepared skater who we see at the end of the competition with the medal around her neck.”

The runner up in the competition was fourteen-year-old Lauren Dinh, a skater who failed to even advance past the regional championships on the novice level last season.

“Since last year, my jump content has changed,” Dinh shared. “I tried to make my choreography more appropriate for a junior lady.”

Dinh opened her Danse Macabre program with a fall on a triple loop attempt, but then landed five triple jumps of her own including two triple Lutzes. Her score of 153.99 points would have won the title in most seasons, underscoring the high level of skating in this competition.

“I made one mistake in the beginning, but I tried to put that behind me because everything counts,” said a wise Dinh. “I told myself to let it go because there is more to do and accomplish. The program didn’t really come naturally for me at first, so I really had to work on the character of it.”

Finishing in third place, fourteen-year-old Katarina Kulgeyko, started off her Nightmare Before Christmas program rather peculiarly when she skated through an intended triple flip.

“I really tried to emphasize the choreography and interpretation today,” Kulgeyko said in the post-event press conference. “I think that I recovered really well from the first flip that I didn’t quite do, and everything went well after that, so I feel quite satisfied.”

Kulgeyko, known just as much for her sassy sense of humor as for her skating, recovered well from the mistake by immediately nailing a double axel-triple toe loop combination. In total, the bronze medalist was credited with four triple jumps, and earned a competition total of 146.62 points.

“There is no secret to my success here,” Kulgeyko replied when asked about her track record of qualifying for the U.S. Championships for the past four seasons. “I just have the determination and drive to keep trying to be on top.”

McKinzie Daniels, the flaxen-haired sixteen-year-old, finished in fourth place with 138.59 points, earning the first national medal of her young career.

“I’m happy with the result this season,” Daniels admitted. “It means a lot because I really wanted to be on the podium.”

“I felt really confident in the warm up, and did everything that I needed to,” Daniels explained. “Then when I competed, I did a nice axel-toe. I kind of let my focus go a little bit and fell on my Lutz. I’m glad that I was able to continue on and skate well because I have struggled with that in the past.”

Mary Beth Marley slipped from fourth place after the short program to fifth overall. Marley had a difficult skate, falling twice, and making small errors on several other jumps. She finished sixth in the freeskate, and earned a total of 137.82 points. Marley will compete Thursday in the senior pairs short program with partner Rockne Brubaker in her national pairs debut.

Another pairs skater, fifteen-year-old Ashley Cain, moved up from seventh to finish in sixth place in the competition. Cain landed four clean triple jumps, earning 137.44 points overall, following up her first place performance in the junior pairs competition earlier in the day.