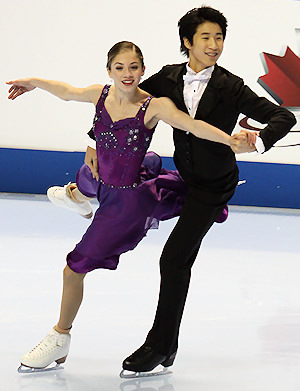 The 2011 BMO Skate Canada Junior Nationals kicked off with the novice pattern dances. The dancers had a chance to show off two very different sides of ice dance—a fierce character-driven dance in the Paso Doble and a charming, ballroom-based dance in the Westminster Waltz.

Pre-event favorites Madeline Edwards and Zhao Kai Pang (BC/YT) lived up to expectations and proved why they have rarely been beaten in competition. The youngsters from Vancouver won both dances, moving from a sharp Paso to a smooth waltz with ease. With 30.55 points, they have a 1.06-point lead heading into the free dance.

Mackenzie Bent and Garrett MacKeen (EO) have excelled at compulsory dances all season, and today was no exception. Their Paso Doble was ranked third, and their 2nd-place Westminster Waltz was the only dance besides Edwards and Pang’s to break 30 points. They finished second with 28.99 points.

Caelen Dalmer and Shane Firus (BC/YT), training mates of Edwards and Pang, are a close third with 28.17 points and are still in medal contention.

Noa Bruser and Timothy Lum (BC/YT) are currently fourth – only .26 behind their teammates with 27.91 points. Sara Yacobi-Harris and Raphael Yacobi-Harris (CO) round out the top five with 27.40 points.

In sixth with 26.70 points, Katie Desveaux and Dmitre Razgulajevs (CO) are still well within striking distance; especially since they are known for their dynamic expression in the free dance.