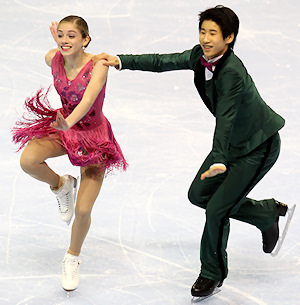 After a nearly undefeated season, Madeline Edwards and Zhao Kai Pang (BC/YT) were the easy favourites for the novice dance Canadian title. Although they have faced stiff competition all year, especially from their Vancouver-area training mates, Edwards and Pang have managed to come out on top more often than not. Today was no exception.

The poised teenagers delivered their program to music from The Muppets and Happy Feet without any major mistakes, and edged their teammates on both the technical mark and the program components. With 66.20 points in the free dance, their total score of 96.75 set a new Canadian record.

Noa Bruser and Timothy Lum (BC/YT), who train with Edwards and Pang under Megan Wing and Aaron Lowe in Burnaby, B.C., moved from fourth up to second with an exceptional free dance to music from The Wiz. Although they lost a level on a planned level three midline step sequence, the team skated—and performed—very well. Their free dance score of 62.22 helped them earn 90.13 points overall for a silver medal.

Second after the pattern dances, Mackenzie Bent and Garrett MacKeen (EO) dropped to third overall, but were happy to hang on to the bronze medal after a mistake in their free dance. Bent and MacKeen’s Rag Time Ripple free dance was light-hearted and wonderfully smooth except for a stumble from Bent on the midline step sequence. Their free dance earned 58.94 points and they finished with a total of 87.93 to settle for bronze.

Caelen Dalmer and Shane Firus (BC/YT) finished fourth overall after a fifth-place free dance. Another team that trains at the BC Centre of Excellence with Edwards/Pang and Bruse/Lum, Dalmer and Firus have attacked their free dance all season long. So when Dalmer went down on the circular step sequence, they recovered right away and kept fighting. In the second half of their program, they did not earn a single Grade of Execution (GOE) mark less than +1. Unfortunately, their steps were downgraded to a level one and their twizzles only earned level two, so their base value this time around was not enough to keep them in the top three. With 53.09 points in the free dance, their overall score of 81.26.

A fourth team from the BC/Yukon section rounded out the top five. Pilar Maekawa and Leonardo Maekawa are the hometown team, continuing to train most of the time in Victoria. Their step sequences were both level two, however, they earned level four on the rest of their elements as they skated with a ton of confidence. With a lot of support in the audience, the Maekawa siblings put on a great show for the home crowd. Their ’20s-gangster-themed free dance was a big hit, and they looked like they were having a wonderful time. Scoring 53.87 points, their free dance was ranked fourth of the day and it was enough to pull them up to fifth place overall with a total of 77.67 points.