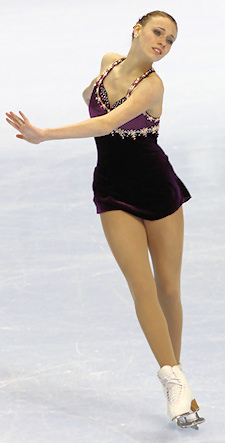 In a dramatic event filled with big placement jumps, the short program leader, Marie-Gabrielle Hémond (QC) managed to hang on to the gold medal overall with a total of 94.68 points.

Hémond’s free skate opened with an excellent double Axel-double toe loop combination that earned +1 Grades of Execution (GOE) from every judge. Although she had to squeak out a few landings and popped a couple of intended double jumps to singles, Hémond’s elegant presentation of her Love Story program helped her stay in the lead ahead of three of her Québec teammates who were right on her heels. Her free skate scored 60.27 and was ranked sixth.

Third after the short program, Ann-Sophie Gagnon (QC) ended up with the silver medal even though her 60.49-point free skate was only ranked second.

A fall on a downgraded triple Salchow was the only major mistake by Gagnon in a lovely program to Bohemian Rhapsody. Her opening double Axel, done in combination with a double toe loop, absolutely soared across the ice. With a total of 94.45, she was only .23 points from first place.

The most impressive rise to the top of the standings belonged to Veronik Mallet (QC), who leapt from a last-place short program to a first-place free skate, ending the night with a bronze medal.

Rounding out the top four ladies from Québec was Roxanne Cournoyer, who stood in fourth after the short program and finished second in the free skate. Cournoyer received edge calls for both of her double Lutzes, but those were the only mistakes in her program to Don Juan de Marco. With 61.33 points in the free, Cournoyer’s total score was 93.92 – less than a point behind the champion.

Madelyn Dunley (CO) broke up a sweep of the top five from Québec. Although she was only 10th after the short program, Dunley fought through a sassy tango program that propelled her to fifth overall with a total score of 92.38. Her skate was clean, and of all the Grades of Execution marks from the judges, she only received two -1s, resulting in a fifth-place free program that earned 60.43 points.