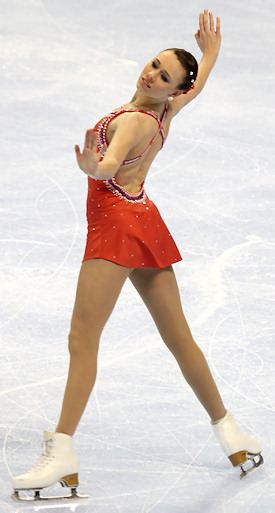 Overall, despite some bobbles, the novice ladies really sold their programs well and put on an entertaining show in the short program. Scores are quite close, with the top 13 ladies within 4.5 points of each other.

Hémond, last year’s national bronze medalist on the pre-novice level, has jumped into the novice level with both feet. A lovely double Axel opened her Turandot program, and she also scored well on her level four combination spin and level two straightline steps. Despite trouble on the landing of her triple Salchow, she received credit for the jump and kept calm throughout the rest of her skate. She currently has 34.41 points.

After finishing 15th in this event last year and only placing 14th at the Challenge last month to qualify, Comtois is off to a great start this week. Her sassy Rockin’ Gypsies short program was ranked a close second with a score of 34.30. While she did not attempt any triples in her program, her double Axel was solid and the rest of her program was squeaky clean.

Gagnon also used Rockin’ Gypsies, and the energetic Québecois’ double Axel earned the highest marks in the event – a beauty of a jump. The rest of her program was confident and well-performed. She actually edged Comtois on the components marks, but lower levels on non-jumping elements left Gagnon with a lower base value on the technical side. With 33.96 points, she is close behind her teammates.

In fourth place and with 32.59 points, Roxanne Cournoyer (QC) cannot be counted out of the medal hunt yet. Her double Lutz-double loop combination gave her some trouble, but her spins were a real highlight. Her layback earned a level three and her combination spin earned a level four.

Karina Tjew (BC/YT) is just behind the foursome from Québec with 32.28 points. Tjew attempted a triple Salchow, but it was fully downgraded and only earned her 0.87 points. She also singled her planned double Axel. However, her level four spins, which highlighted her flexibility, and a level three step sequence kept her high in the standings.