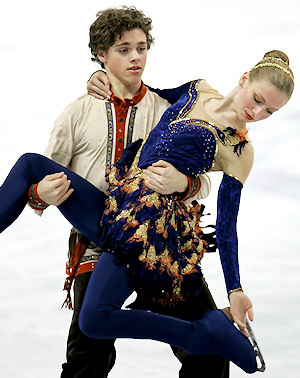 The brother and sister team of Rachel Parsons and Michael Parsons used a big lead from yesterday’s compulsory dance competition to win the novice dance title at the 2011 U.S. Figure Skating Championships this afternoon in Greensboro, N.C.

“We definitely wanted to medal,” said the perky thirteen year-old Rachel. “There is a higher level of skaters to compete against, so we knew it would be a challenge.”

The siblings, who represent the Washington Figure Skating Club, have only skated together for eleven months, and skated a rousing free dance to Stravinsky’s Firebird that earned them a competition total of 112.82 points.

“Now that we skate together, it makes our schedule much easier,” Michael explained about skating with his sister. “We don’t have to coordinate with other families.”

Despite receiving just a level one on their twizzle sequence, the Parsons were able to hold on to the lead over the silver medalists Jessica Mancini and Tyler Brooks of the Broadmoor Skating Club.

Mancini, 14, and Brooks, 16, earned the highest marks of the day with their Louis Armstrong free dance, finishing with a total of 109.19 points overall.

“It was a celebration of everything we have trained for,” Brooks said of their first place free dance. “It was nice to bring up the performance level today. It felt great.”

The duo, who have a thirteen inch height difference, were most proud of the performance quality of their skate today.

“We just really wanted to sell the program today,” said the energetic Mancini. “It was the last one of the season, and it was so fun to be in front of the big crowd. It was nice to see that they were as in to it as we were.”

Like the champions, Mancini and Brooks are in their first season of skating together, pairing up in March, and earned an impressive 109.19 points in the competition.

“We’re very new to this, and I just moved up from intermediate,” Brooks explained. “We’ve just been working as hard as we can to improve each and every day. This was a great experience for us.”

Finishing in third place is another first year team- Kaitlin Hawayek and Michael Bramante, who skate for the Skating Club of Western New York and the Detroit Skating Club respectively.

“I’ve always been told that your first Nationals is memorable, and I know that this one will be,” Bramante said of his experience in Greensboro. “Winning a medal makes me happy.”

Hawayek and Bramante have turned heads this week not just for their skating, but also for the sacrifice that they put forward in order to train together as a team.

“I live in Buffalo, New York,” said the nonplussed Hawayek. “My parents drive me to Detroit each week so that I can train with Michael so that I can go to school in Buffalo.”

Their free dance to music by Ikuko Kawai helped them to earn a total of 106.64 points, earning the bronze medals over Elliana Pogrebinsky (Peninsula Skating Club) and Ross Gudis (Washington FSC), who finished in fourth place and winning the pewter medals.