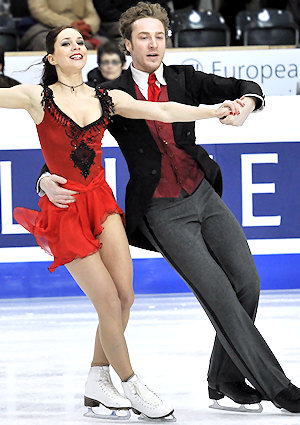 Nathalie Pechalat and Fabian Bourzat of France currently lead in ice dancing after the short dance at the 2011 European Figure Skating Championships.

Nathalie Pechalat and Fabian Bourzat of France grabbed the lead in the Short Dance, however, Russia’s Ekaterina Bobrova and Dmitri Soloviev are just 1.84 points behind. Veterans Sinead Kerr and John Kerr of Great Britain came third in the first day of the dance competition.

Federica Faiella and Massimo Scali’s dream of winning the European title was crushed when they faded to ninth after an error on the twizzles.

Pechalat and Bourzat, who skated last, gave a solid performance of their lyrical Dr. Zhivago Waltz, but they seemed to hold back. The pressure was on. The skaters skaters appeared to feel the same way about their performance.

“Yes and no,” Bourzat answered, when asked whether they were pleased with their program. “Yes because we finished in first place. But we didn’t skate as free because of the pressure of a possible title. It was not our best performance.

“Skating last was not a big deal for us,” Bourzat continued. “The training went good so we didn’t take skating last into consideration. It doesn’t matter whether we skate second or last.”

“I am not disappointed with the performance,” underlined Pechalat. “We felt the pressure due to possible medals, but it was a good experience for the Worlds. Our goal is to win the competition and to skate a good performance, but as soon as the music starts, it’s like home. I forget about the temperature, judges and everything else. I focus on the skating.”

Bobrova and Soloviev surprised everyone with a new short dance to Where I Want to Be from the musical Chess. Their performance was powerful and dramatic and suited the feeling of the Golden Waltz much better than their previous program to Delilah by Tom Jones. The Russian Champions had exactly the same levels for their elements as the French and scored 65.46 points.

“This dance is so much stronger,” Bobrova explained. “The other dance was nice and everyone liked it, but this program is more powerful and it is just better material for us.”

“When I heard the music for the first time, I got goose bumps and I’m on an emotional high performing to it,” Soloviev added.

Although they are now Russian Champions, the couple doesn’t take their position in the team for granted.

“We still have to prove that we are the top team,” said Soloviev. “We have to prove this every season, in each competition, because the Russian dance team is so strong. And that is good.”

Kerr and Kerr, who had missed the Cup of Russia and the British Championships due to her dislocated shoulder, celebrated a comeback in Bern with an entertaining performance to an elegant Waltz to At Last and a lively Quickstep to Shut Up & Let Me Go. The brother-and-sister team really portrayed the different moods of the two rhythms and got the crowd going. Their rotational lift garnered a level four, while the two Waltz sequences, the twizzles and the side by side footwork were a level three. Kerr and Kerr picked up 62.87 points.

“We are very happy with our performance,” Sinead Kerr noted. “We couldn’t have skated it much better, but in the end, it is up to the judges. The audience reacted really well to our performance. After we finished all the elements, we could just enjoy ourselves.”

Sinead is now recovered from her injury which happened the day they were supposed to leave for the Finlandia Trophy in October. It would have have been their first competition this season.

“The shoulder dislocated so we had to take some time off,” Sinead explained. “We came back to compete in Canada (Skate Canada) as we thought we had a chance to win, but it still wasn’t right. We decided to rehabilitate for the rest of the season in order to come back to the Europeans and the Worlds better, as they were the main things. The rehabilitation worked and the shoulder is back to normal.”

Reigning World Junior Champions Elena Ilinykh and Nikita Katsalapov of Russia gave an intense performance to their unusual dark Waltz by Alfred Schnittke. The couple drew the crowd into their performance and looked sharp, especially in their fast twizzles. Ilinykh and Katsalapov posted a new seasons best with 60.93 points and edged out teammates Ekaterina Riazanova and Ilia Tkachenko by just 0.02 points for fourth place.

“I was a little nervous,” admitted Ilinykh. “After all, these are the European Championships with the best couples competing. The whole level of preparation is different. You cannot compare it to other competitions.”

“I wasn’t nervous today,” Katsalapov said with a smile. “The performance was clean, it was strong, but we could give more. We were focused on the elements as this is such a serious competition. During the performance, we support each other. We look each other into the eyes and we know how the other one is feeling.”

Riazanova and Tkachenko looked very smooth in their classical Waltz to The Snowstorm. The National silver medalists were awarded a level four for the first sequence of the Golden Waltz, the twizzles and the lift, and a level three for the side by side step sequence and the second Waltz sequence.

“I really felt nervous at Russian Nationals,” Tkachenko told the press. “To get selected there for this Championships was much harder than to compete here. We are used to competing on a high level in Russia. Therefore, I felt quite relaxed. We don’t care about the results of the other couples. We keep the focus on ourselves.”

The unheated and thus cold ice rink in Bern was a hot topic among media and skaters since the beginning of the week.

“We knew about the cold, and regarding this, we laid a special focus on our training,” Tkachenko commented. “Today it was no problem because I wear a jacket, but I worry a little bit about the free dance on this Friday where I’ll wear a thinner costume.”

Nora Hoffmann and Maxim Zavozin continued their successful season by placing sixth with 58.00 points. The Hungarians turned in a characteristic Waltz, but he still looks a little stiff at her side.

“Last year we had to fight to fit into the top ten,” Zavozin said. “We didn’t have so much confidence. After we made it into the Grand Prix Final this year, it made us realize, we should be up there. It’s easier to skate knowing you’re one of the  best teams and we even hope to improve for the free dance.”

Nelli Zhiganshina and Alexander Gazsi of Germany were a little surprise for those who hadn’t seen them earlier this season. The German Champions had chosen an unusual Waltz from Cirque du Soleil, and put together a cute program. They were the only team to earn a level four for both sequences of the Golden Waltz. They finished seventh at 57.82 points.

“We got the maximum of levels for us today – everything a level four but a level three for the step sequence,” Gazsi noted. “We’ve skated better ODs (short dances), but technically it was top level today.”

The team had competed only once at Europeans before, in 2007, and their last ISU Championships were Worlds in 2008.

“The judges probably have forgotten about us and think, ‘Oh, this is a nice new couple,'” joked Gazsi. “Seriously, I think we’ve progressed since then.”

The short dance turned into a nightmare for reigning 2010 European silver medalists Federica Faiella and Massimo Scali. She stepped out of the twizzle right at the beginning of the program to My Fair Lady and the whole performance seemed affected by it. They were cautious and their lift was graded only a level two. However, they still had a level three and four for the Golden Waltz, and a level three for the side by side footwork. They have 57.18 points.

“We don’t know how it happened,” said Scali with a sigh. “We felt a bit more pressure this season, but we practiced so long. Every little bit can make the difference. I think the podium is gone but we’ll try to enjoy our last Europeans.”

Both have been affected by back injuries earlier this season.

“It affected our training the whole season,” Scali added. “We were not ready. At the beginning of the season, our Grand Prix wasn’t the best, but we arrived here ready, we both felt better.”