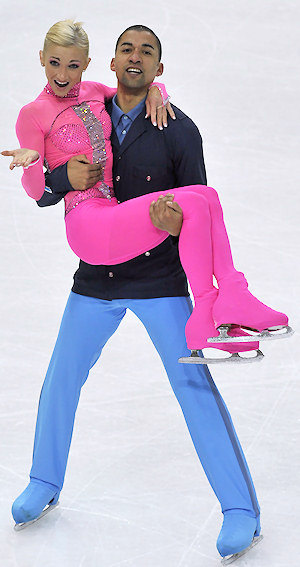 Aljona Savchenko and Robin Szolkowy of Germany recaptured their European title lost last year in the Pairs event at the 2011 ISU European Figure Skating Championships. Defending champions Yuko Kavaguti and Alexander Smirnov of Russia settled for the silver this time , while their teammates Vera Bazarova and Yuri Larionov claimed the bronze – their first medal at Europeans.

Savchenko and Szolkowy had a strong start into their entertaining Pink Panther routine with a high throw triple flip and a triple toe-triple toe sequence, but then Savchenko stumbled out of the side by side spin and just stood next to her spinning partner, obviously confused. The spin received no points.

The Germans recovered quickly to produce a triple twist, difficult lifts, and a throw triple Salchow, in the last second of the program, but both doubled the side by side Salchow. They picked up a level four for the death spiral, the lifts and the pair combination spin and also mostly earned a plus two grade of execution for their elements.

With 133.89 points, Savchenko and Szolkowy were ranked second in the Free Skating, but remained in first place overall at 206.20 points to capture the “cold” medal.

“I got stuck and I didn’t know what to do,” Savchenko later explained. “It was a new situation for me. I thought should I stand or should I continue to spin? This can happen to everyone. The important thing is to continue the program which is what we did.”

“If there is one element missing completely and your advantage in points after the short program is slim, the door maybe wasn’t wide open for the Russian couple, but it was at least leaning open,” Szolkowy noted. “I watched their performance and they skated very well. They skated clean, without any major mistake, maybe just a wobble because of the cold, but everyone had this. I thought it would be close.”

Sitting on a chair, Szolkowy had watched backstage on the TV screen, motionless and silent while Savchenko stood a few steps away in the mixed zone. Only when the result came up and they saw that they had won, she let the tension out with a scream and hugged her partner.

Kavaguti and Smirnov, the last skaters, defied the cold in the Bern ice rink to lay down a strong program to Clair de Lune. They produced a triple toe, a triple twist, two triple throws as well as a double Axel-double Axel sequence and level-four lifts and spins. Only the death spiral was a level one. They were ranked first in the free skating with 134.12 points, but they couldn’t overtake the Germans in the final result with their total of 203.61 points.

“If in the short program, we (they and Savchenko and Szolkowy) skated at the same level, I think today we did our job in the free skating by executing all our elements cleanly,” commented Smirnov. “But that’s sport. It just means that we have to work even harder. There are no excuses.”

“I felt like the muscles weren’t ready,” said Smirnov. “If we had known about the temperature earlier, we would have prepared for it at home in St. Petersburg by skating naked. It is a little strange that a competition of this level would be held under these conditions. But the conditions are the same for everyone.”

“We are satisfied with the performance,” concluded Kavaguti. “We made no real mistakes, just little ones, but the performance didn’t become a whole. The impression of the program was affected. This is something we’ll work on.”

Bazarova and Larionov’s routine to The Man in the Iron Mask was highlighted by a side by side triple toe and double Axel-double Axel sequence and a high triple twist. Their elements were solid, and the program was nice but not really captivating. The couple from Perm scored a season’s best of 125.35 points and totaled 188.24 points to earn their first medal at the ISU European Figure Skating Championships. It is also a nice present for Vera’s upcoming 18th birthday on Friday.

“We still can’t believe it. This is our first medal at the European Championships,” Bazarova told the press conference.

“We really wanted it (being on the podium), but we mostly thought of performing our programs and elements,” Larionov added. “There are a lot of emotions right now and we’ll remember this moment for a long time.”

The couple didn’t complain about the cold.

“There has been a lot of talk about the cold,” said Bazarova. “Everyone told us it will be very cold and it is hard to bear, but it actually wasn’t so bad. We didn’t feel it too much. At home in our ice rink in Perm, it can also be very cold so we are kind of used to it.”

The new Russian team of Katarina Gerboldt and Alexander Enbert came in fourth in their debut at the European Championships. Gerboldt fell on the throw triple flip and the triple twist was messy again, but they landed a triple toe-double toe-double toe combination, a triple Salchow and a throw triple loop. They had 169.95 points.

“We are very pleased with our debut at the European Championships,” Enbert said. “We did almost everything we can do. As a new team, each competition is a very valuable experience for us. When we get back home we’ll analyze everything.”

When asked about the fall, Enbert relied, “Maybe we are still lacking experience. The element isn’t consistent yet and we still need to work on it.”

Skating to Romeo and Juliet by Nino Rota, Stefania Berton and Otar Hotarek again left a good impression, although the Italians dropped from fourth to fifth with 164.83 points. They, too, completed a triple toe-double toe-double toe, but she doubled the Salchow and fell on the throw triple Salchow.

“We are happy with the performance,” said Hotarek. “It has been a great event. We have gained a lot of experience, which is what we needed. And we improved our seasons best by quite a bit. But we could have done more. We still need more experience and practice. Starting in the last group was exciting for us.”

Maylin Hausch and Daniel Wende gave a solid performance that featured a double twist, a throw triple Salchow and throw triple flip, but Wende stepped out of the back end of the triple toe-double toe combination and aborted the Axel lasso lift on the take-off.

“Already after the first minute I felt like shock frozen; just before the first lift I had no feeling in my fingers and in my legs. I couldn’t do anything to prevent it,” Wende explained. “The pain disappears, but the disappointment lasts. Especially after starting our performance so well it is very annoying. Such a mistake has never happened before. Now I have to handle it.”

The Germans remained in sixth place with 149.97 points.