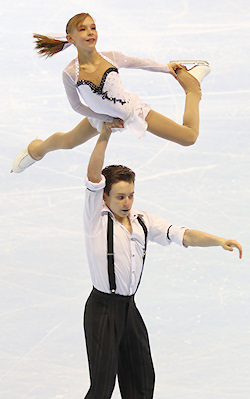 At 12 years old and 4’3,” Shalena Rau is the youngest and smallest competitor in the novice pairs event. Her partner, Phelan Simpson, is the youngest boy in the event. However, at their second year on the novice level, the team of Western Ontario lead the field heading into the free skate.

Rau and Simpson’s On the Town program opened with a high double twist, and they delivered the rest of their elements cleanly with tons of charm. Their side-by-side jumps are double loops, not as difficult as some of the other teams, but they made up the points in the program components where their speed and finesse were rewarded (40.72 points).

Mary Orr and Anthony Furiano train with Rau and Simpson in Waterloo, Ont., and with 39.34 points, they are nipping at their teammates’ heels. They also opened with a very strong double twist, however, they completed double flips for their side-by-side jump. Their fiery style was well-suited to Scott and Fran’s Paso Doble, and it is clear that the top two pairs are both in this competition to win it.

Leah Hyslop and Bob Goodwin (WO) are currently third with 36.55 points. They may not have the experience of the top two teams, who are both making return trips to Junior Nationals, however, Hyslop and Goodwin did not show too many signs of nerves this afternoon. Hyslop stumbled on the landing of their throw double toe loop, however, their side-by-side double loops late in the program were picture-perfect.

With a charming program to The Pink Panther that featured interesting choreography, Dylan Conway and Dustin Sherriff-Clayton (CO) managed to finish fourth even though their side-by-side double Lutzes did not go as planned. Sheriff-Clayton singled the jump while Conway fell on the landing. Still, the team kept up the character and sold the program to the end.

Still in the medal hunt, Claira Whicher and Wesley Killing (WO) are in fifth place with 35.00 points.  Taking a more lyrical approach to the short program than most pairs, Whicher and Killing fell on the their side-by-side double Lutzes, which also received an edge call, but their program still featured some lovely moments. They train with Hyslop and Goodwin in Cambridge, Ont.