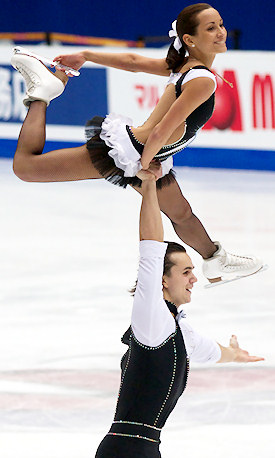 It appears that Russian pair skating is returning to it’s former glory with many talented and new pairs. One pair to watch out for are Ksenia Stolbova and Fedor Klimov. The team from St. Petersburg competes in their final junior year this season.

Stolbova and Klimov took the bronze medal at Junior Worlds in 2010 in their first season as a team, and want to challenge for the gold this time in Korea. They are determined young athletes with a good sense of humor and have progressed significantly this season.

Both started out early in skating. Stolbova chose her destiny herself as a tiny three-year-old.

“I watched someone skating,” she said. “I don’t remember who it was, but I wanted to do it. There was no opportunity, but I bugged everyone until [I was] six-years-old and I started to skate.”

“I got skates and was sent to public skating sessions,” Stolbova recalled. And she liked it right away.

“I was given a condition,” she explained. “I could skate as long as I didn’t fall. So I skated three hours! I did step by step and I didn’t fall. And so my athletic life started.”

Klimov, on the other hand, didn’t really have a choice.

“Well, my mother is a figure skating coach and so she took me to skating. I didn’t really choose,” he said with a smile.

His mother is still coaching children in the Figure Skating Academy in St. Petersburg where the couple trains as well.

They switched to pairs as teenagers. Again, Stolbova picked the discipline herself.

“I just wanted to try it,” she said. “I won’t say that I didn’t like singles, but I wanted to do something different and so I decided to leave (singles) when I was 14. Until now, I really like pairs and I have no regrets.”

Klimov was 16 when he switched to pairs on the suggestion of his coach.

“I didn’t want it at the beginning, but with time I made my peace with it,” he revealed.

Before Stolbova and Klimov teamed up in 2009, Stolbova skated with Artur Minchuk for two years and Klimov had two other partners. They were paired by their current coach, Liudmila Velikova.

“Ksiusha (Ksenia) didn’t suit at all the boy she was skating with,” Velikova explained. “They are both explosive personalities. It was impossible. Then we suddenly remembered Fedia (Fedor). We said, ‘let’s have a try, maybe it will work’. We didn’t expect that they would gel so quickly, but they suited each other right away. They skated together and it was obvious that they are a pair.”

The couple qualified for the 2009-10 Junior Grand Prix Final right away, however, they were handicapped by injury and were not in top shape. They skated poorly in the long program at the Junior Final to finish seventh. When Junior Worlds came around, they were healthy again and skated much better.

For this season, the team chose two new programs – the Spanish themed Asturias by Isaac Albeniz for the short program, and a playful, funny program to La Strada for the free skating.

“We took a long time to choose the music,” Stolbova admitted. “For the short program I immediately suggested Asturias because I knew it and I wanted it. For the long program we had a lot of doubts, and we were looking at a lot of music. For example, classical music and modern music, before we finally took La Strada. We were skeptical at the beginning, though, and we were afraid that it might not work, but it did.”

“The short we picked indeed very quickly,” he said. “The Spanish music really suited us. This music for the free skating was one of the first suggestions, but somehow I didn’t really like it.” However he was finally convinced that La Strada would be a good choice.

There are some unique moves in this program. For example, they do a double Axel right at the end – not side by side – but jumping in opposite directions.

“Last year we had that in a show number and we thought why not do it in the program,” Klimov explained. “It works, it is unusual, nobody else does it, plus as the next to last element. But we can do that, so why shouldn’t we? You have to surprise with something.”

Stolbova has a bubbly personality and is quick to answer each question, while Klimov is calm and always takes his time.

“Their characters suit each other very well,” coach Liudmila Velikova said. “He (Klimov) is different. He is a very smart, well-heeled boy, while she (Stolbova) might explode every moment. She is running around, doing something, is busy and he is always calming her down. He always says what they need to do. He doesn’t let anyone too close to him and he makes everyone to respect his opinion. It is a very strong psychological combination. He can work a lot. She is less hard working, more short-term and with more efficiency. He is like a bear, slowly crawling out of his hiding place and then he takes off.”

Although Stolbova’s and Klimov’s personalities are totally different, they are a very good match on the ice. Velikova also praises their ability to work independently.

“You give them a plan and they work on it themselves,” said the experienced coach. “She (Stolbova) mostly created the footwork herself. If you don’t give her anything to do, she’ll protest. She always needs to create something. But Fedia is the opposite. He needs his order and he wants to work a lot. She leaves and he still practices jumps or polishes something else.”

The strong points of the Russians are their beautiful throw triple flip and throw triple Salchow, as well as the solid side by side jumps triple toe and double Axel. The throw Salchow is so big that a quad seems possible.

“I have thought of that as well,” Klimov agreed, referring to the throw Salchow, “but I haven’t talked about it yet with my partner and our coach.”

Velikova only sees one weakness in her team right now, and that is the twist. So far, Stolbova and Klimov don’t include a triple twist into their routines. The twist is a painful move for the couple, but they are determined to learn a triple when they move up to seniors next season.

Off the ice, Stolbova likes to watch tennis and is rooting for the Russian female players, especially for Maria Sharapova. She loves ice hockey and in skating she sees Ekaterina Gordeeva as her idol. The 19-year-old enjoys shopping, going to the movies, going out with her friends, and eating sushi in her spare time.

Klimov says that he doesn’t have any idols.

“I’m interested in modern figure skating and there are a couple of skaters that I like and whose level I’d like to reach,” he noted, naming Germany’s two-time World Champions Aljona Savchenko and Robin Szolkowy. To relax, he likes soccer. Usually the two don’t spend their spare time together.

Both skaters are studying at the Lesgaft Academy in St. Petersburg, an institution for athletes.

“I didn’t think about that yet,” Klimov answered, laughing. “I’ll skate as long as I can and maybe I’ll skate after that.” He believes that his life forever will be connected to figure skating. “If you do something for 17 years, you don’t get away from it,” he pointed out.

Stolbova and Klimov competed both in juniors and seniors this season. They took the silver medal at the Junior Final and finished fifth in their debut at the international senior level at Skate America. At Russian Nationals (senior level) they skated well to come in sixth in what was a strong field, and in early February, they defended their national junior title successfully with strong performances.

The team names Junior Worlds as their main goal of the season.

“We really want to win Junior Worlds,” Stolbova admitted. However, she realizes that competition is tough with defending champions Wenjing Sui and Cong Han of China and defending silver medalists Narumi Takahashi and Mervin Tran of Japan returning to the event as well.

Nevertheless, the ambitious Stolbova thinks further than Junior Worlds. When asked where she sees herself in five years, she answers again, quickly and with a smile, “Well, I’d like to sit at home with the gold medal from Sochi so I can look at it.”