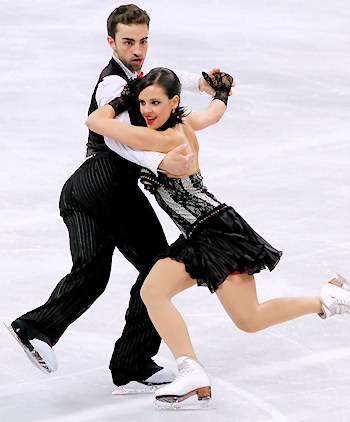 Spain certainly isn’t a country that you would associate immediately with figure skating, but it has made itself known in the scene. By now, not only single skater Javier Fernandez draws attention, but also the young dance team of Sara Hurtado and Adria Diaz. These two teamed up only three years ago and are the first ever ice dance team to represent Spain in international competition.

This season they already placed 15th at the European Championships and cracked the top ten at Junior Worlds when they finished ninth. The audience and fans take notice of them not only because of their placements, but because of their cool programs and flamboyant style. Hurtado and Diaz are exotic, they are original, and they are progressing very fast.

Hurtado and Diaz were both single skaters and took the decision to switch to dance themselves.

“I said to my coach, ‘I don’t want to jump anymore, I’m just not good enough’, Diaz recalled. “He said, ‘try ice dance’. His coach established a contact to well-known French ice dance coach Romain Haguenauer who comes sometimes to Spain to work as a choreographer in summer camps. Diaz asked Hurtado, whom he knew from competing in singles, if she was interested in dance. She was, but at first there was no ice dance coach for the athletes.

“We begged the Federation for two years, please, please, we want to do ice dance,” Hurtado said. Finally it happened. The Federation hired John Dunn from Great Britain in early 2008.

Diaz moved from his hometown of Barcelona to Madrid and they started.

“The basics weren’t the best in the beginning and obviously there is no history in dance in Spain ever,” Dunn noted. “Sara and Adria were the first dance couple. It was hard in the beginning. They had no concept of dance holds or basic skating or even the compulsory dancing at the time. So it was tough. We had a Junior Grand Prix nine months later, so we worked five hours a day every day.”

The new dancers progressed quickly. “We did the Junior Grand Prix in Madrid nine months later and then they did (Junior Grand Prix) South Africa and then they did Junior Worlds and came 32nd,” Dunn said approvingly. “So that was two years ago, and they have just done Europeans and came 15th. And now they got into the top ten at Junior Worlds. The improvement from three years ago from nothing to where we are now is amazing.”

His students enjoy what they are doing. She likes “everything” about ice dance, assured 18-year-old Hurtado with a smile. “You are not alone on the ice; you have something to hold on. If you are down, you have support. It is not just sport. You share it with another person.”

Hurtado revealed that the most difficult element for them to learn were the spins. For her personally, it was the twizzles.

“For me, it was to be together,” 20-year-old Diaz shared, laughing. “I skated 12 years alone. Now I have to do crossovers and the first thing is – ‘where is she going?'”

Both are well aware of their role as pioneers in their sport in their country and they enjoy it.

“I think it is a great experience,” said Hurtado. “We open our country for more disciplines. We feel really proud like at Europeans when we have two boys, one girl and now one ice dance couple. We are getting bigger and bigger.” “We want to set an example for the other ones, for freestyle skaters and ice dancers,” her partner agreed. By now there is another junior dance team and some younger kids that Hurtado and Diaz help to teach themselves.

However, the practice conditions are not the best. The ice rink in Madrid is busy from early morning to midnight with figure skating, ice hockey, and public skating sessions. As a result, the dancers have their first practice from six to eight in the morning, and the second from two to four in the afternoon.

“We had a lot of trouble in the beginning because the Spanish are not used to early mornings,” Dunn explained with a grin. “At the beginning that caused a little bit of a problem, but we got over that in time.”

Now it is working and the athletes attend university classes after the morning practice. Hurtado is studying journalism and Diaz is studying sports science. Their university is very supportive. The athletes can miss classes and move the dates of their exams if necessary.

For both dancers, 2002 Olympic Champions Marina Anissina and Gwendal Peizerat of France were big idols even when they were still single skaters. Not surprisingly, Hurtado and Diaz were very excited when they suddenly met Peizerat at Europeans in Switzerland.

“He looked to us and he saw me, and he said ‘Hi’,” Hurtado shared and almost looks like a young skating fan, telling her story. Right now she looks up to Olympic silver medalists Meryl Davis and Charlie White. “They are really smooth skaters. It looks so easy, but they do so much difficult stuff. All their lifts are very impressive and new. All the steps and choreography… everything is really good. I always want to be like this,” Hurtado noted.

This season, the team has been competing at both the junior and the senior level. Their schedule was busy with two Junior Grand Prix events, three international competitions, the Universiade, Europeans, and Junior Worlds.

“I liked it, because we gained a lot of experience,” Hurtado said. “When we were at Europeans, we felt the difference compared to skating with junior couples. To see the top ten at Europeans was like – wow, I’ve seen them on television and now I’m skating with them and practicing with them.” “We took the competitions this year as a practice, as a learning experience,” Diaz added. They were scheduled to compete at Worlds as well, which would be their debut at this event.

The dancers put together two versions of their free dance – a junior and a senior version – to Be Italian and also originally had two different short dances. Later, however, they decided to use the Spanish Waltz Algo Pequenito for both short dances. Although it was a hard year for them with switching back and forth between juniors and seniors, the Spanish are planning to do both again next season.

Their long-time goal are the Olympic Games in Sochi, and chances are good that they’ll be there.
“For me, they have great potential to go forward and possibly be a top five, top ten couple in Europeans and Worlds,” commented John Dunn. “They work hard. They get on well together, which I think in ice dance is always important. They are both talented. In that respect they probably have a good package. Otherwise they wouldn’t have improved so much over the three years that they’ve been skating.”

The coach describes Hurtado as the more artistic and Diaz as the more technical part in the team. “Sara is more relaxed than Adria. Adria is very intense and wants everything now. Sometimes we have to calm Adria down. It is only because he wants to do well all the time. In that respect, that is not a bad thing. He tends to drive everything forward in the partnership,” Dunn said. “Obviously they are not the finished article yet, but they’ve only been together for three years. So in five, six, seven years…. we’ll see.”