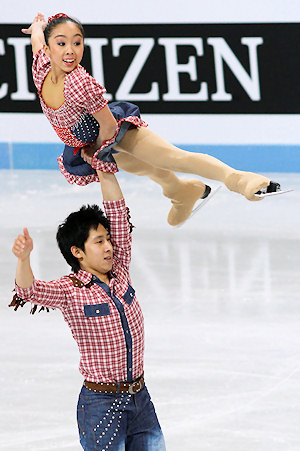 Wenjing Sui and Cong Han of China are the current leaders after the Short Program at the 2011 World Junior Figure Skating Championships.

Wenjing Sui and Cong Han of China took a narrow lead over Japan’s Narumi Takahashi and Mervin Tran in the Pairs short program at the ISU World Junior Figure Skating Championships on Wednesday in Gangneung, Korea. Ksenia Stolbova and Fedor Klimov of Russia came in third, and so the standings after the short program are the same from the previous year.

Sui and Han gave a fast-paced performance to American country music and nailed all their elements: a double Axel, double twist, high throw triple toeloop, a toe lasso lift where he lifts her up on just one hand, and a level-four side by side spin and death spiral. The reigning World Junior Champions got 59.16 points.

“Today we feel very good about our short program,” Han said. “It was something special tonight. We also want to congratulate our competitors.”

Takahashi and Tran are just 1.31 points behind at 57.85 points. It was a seasons best for the Japanese-Canadian duo. Their routine to Feeling Good included a double Axel, a double twist, and a throw triple toeloop, and looked very smooth and elegant. The twist, the lift, the side by side spin and the death spiral all were graded a level four.

“We are very happy with the way we skated,” Tran commented. “It was one of the best performances of the short program this season.”

Some observers felt that Takahashi and Tran should have been in first place today.

Stolbova and Klimov started with a double twist, but then she put down both hands on the throw triple toe. The double Axel was solid again, and the defending bronze medalists were awarded a level four for the lasso lift, spin, and death spiral, and scored 54.21 points – just below their season’s best. The performance to Asturias overall was crisp and characteristic.

“Overall we are pleased with our performance,” offered Klimov. “We made one mistake, but everything else was good. Our competitors were better than we were tonight, so the result is justified.”

“I don’t really know what went wrong,” Stolbova said, referring to her error. “I wanted to do it (the throw jump) beautifully, and maybe I was overexcited. I was thinking of the first place and apparently that disturbed my concentration. I should have been calmer.”

There was a visible gap between the top three and the lower ranked couples. Natasha Purich and Raymond Schultz of Canada placed fourth with 47.33 points. Skating to a Greek Sirtaki, they completed a double Axel and level-four spin and lift, but she touched down with her hand on the throw triple toe.

“It is pretty amazing for us sitting in fourth place,” Purich commented. “Tomorrow we just want to have fun and do our best.” “It was a little shaky in some spots, but pretty good  all around,” her partner added. “It was a seasons best. We can’t really complain about that and to be 4th behind last year’s medalists is very good.”

Russia’s Kristina Astakhova and Nikolai Bochkov, who compete in their first Junior World just like the Canadians, finished fifth (46.67 points). They skated to Tango Amore and produced a solid double Axel, double twist, and level-four side by side spin, but she stepped out of the throw triple toe and their lift was only a level two.

“It was mediocre,” a critical Bochkov said. “We could have done everything better, but basically we did very well for ourselves. We skated poorly at our Junior Grand Prix in Austria, but this was our first international event, and now we felt much more comfortable.”

Alexandra Vasilieva and Yuri Shevchuk from St. Petersburg came in sixth. She two-footed the double Axel, and it was downgraded, but their other elements were solid. USA’s Ashley Cain and Joshua Reagan had bad luck. He fell on the double Axel and realized that his lace had come undone. He needed a break to fix it. The couple finished eighth.