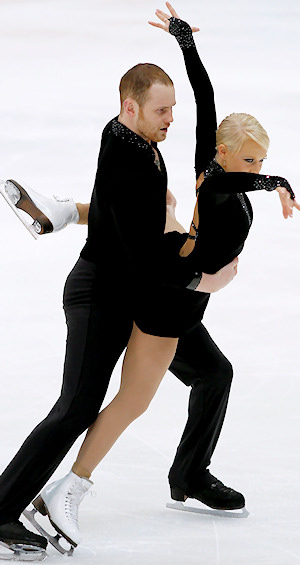 Legendary figure skating coach Tamara Moskvina once said of pairs teams that it takes four years to come together as a team. Newly crowned U.S. pairs champions Caitlin Yankowskas and John Coughlin have proven Moskvina’s theory to be true, capturing their first American title in the fourth year of their promising partnership.

Yankowskas, 20, and Coughlin, 25, teamed up late in the second half of 2007 after dissolving previous respective partnerships.

“Caitlin came to have a tryout with Dalilah (Sappenfield) as a coach and Broadmoor as a training center in June 2007,” Coughlin explained. “Dalilah mentioned her to me as a possible partner. When I came for the tryout, the Broadmoor closed down because the State Games of America was here, so we road tripped to a little town in the middle of Iowa and skated in a rink there for almost a week.”

That week in Iowa was more than both skaters had hoped for.

“Very early on, John sat me down and told me that he would always keep me safe,” Yankowskas said. “I knew that I never had to worry about what he was doing when we were in lifts, and that allowed me to just do my thing. I thought he was just a really cool guy.”

In their first two seasons, Yankowskas and Coughlin earned a spot to compete at the U.S. Championships, finishing in 6th and 7th place in 2008 and 2009 respectively.  In 2010, however, the duo made a push to win a spot on the Winter Olympic Games in Vancouver, B.C.  After finishing in second place in the short program at nationals, it appeared that achieving that goal was well with in reach. Everything unraveled in the freeskate, however, and Yankowskas and Coughlin found themselves all the way down in sixth place, equaling their best finish at the championships.

“It was very disappointing,” Coughlin said. “We weren’t able to show in competition what we could do in practice. Figure skating is a sport, and sometimes that just happens.”

After the championships, Yankowskas and Coughlin headed to South Korea to compete in the 2010 Four Continents Championships where they finished in fourth place. Upon returning to the U.S., Coughlin learned that his mother, Stacey, had fallen ill, and was summoned to his home in Kansas City, Kan., to say his final goodbyes. She passed away in late February.

“Ryan Bradley and I went back to visit, and we knew that it was probably the last time we would see her,” Coughlin shared. “She was my best friend in figure skating and so much more.”

After a period of reflection, Yankowskas and Coughlin decided to rededicate themselves to skating and to each other as skating partners. Training for the 2010-11 season began almost immediately.

“We grew up a lot in the off season,” Coughlin admitted. “There were a lot of things that made us kind of look at ourselves in the mirror. Obviously our real life personal struggles helped us to mature on the ice. We put a lot more value into our training time, and wasted a lot less time on trivial things.”

Yankowskas added, “Last year we really learned how to train, but we weren’t able to put it together in competition. This year we decided that we were going to take it to the next level instead of back tracking through the off-season.”

In the off season, the duo headed to Canton, Mich., to work with choreographer Marina Zueva to create their new competitive programs for the season. The famed ice dance coach settled on music from Doctor Zhivago for their short program, which, according to both skaters fit them like a glove.

“It was the typical Caitlin and John program,” Yankowskas mused. “(Sappenfield) decided that she wanted us to take a risk this season. She said, ‘I want you to skate a tango.'”

So Yankowskas and Coughlin ditched the Doctor Zhivago program, and began working with Sappenfield on a new program to Oblivion by Astor Piazzolla.

“This is not the cliché, really sharp, snapping of the head Tango,” Coughlin said. “It’s a very sexy and sultry program, and Dalilah is very comfortable in this genre. It’s not something that you usually associate with someone with blonde hair and blue eyes, but she definitely pulled this out in us.”

In dedication to Coughlin’s mother, Zueva selected Schubert’s Ave Maria for the freeskate, a decision with which Coughlin was not initially pleased.

“I did not want to do it at first because I didn’t think I’d get through the season,” Coughlin said. “There was a lot of gentle and not-so-gentle prodding because they knew what I wanted to do was go out and clown around on the ice and not acknowledge what had happened. That would’ve caught up with me at some point. So I dealt with it every day and that made it easier.”

As the season approached, Yankowskas and Coughlin learned that they had been selected to skate in two Grand Prix events for the first time in their careers. For their first assignment, the duo traveled to Nagoya, Japan, to compete in the NHK trophy. After a rocky short program, they finished in fourth place overall – less than one point from the bronze medal.

“We’ve always known that we were competitive if we skated well,” Coughlin said. “I think that this is they year internationally that we started doing that. We’re not really afraid of anybody. There are some teams out there who are obviously more seasoned than us, but on a good day we feel like we can hang with anybody.”

Their finish in Nagoya made Yankowskas and Coughlin even hungrier for success in their second event, SAMSUNG Anycall Cup of China, in Beijing, just two weeks later. This time, the couple skated more confidently, and finished with the bronze medal – their first in the Grand Prix as a team.

“It was really great to get on the podium,” Yankowskas said. “We were happy with how we skated in China, and it was great to have a medal to bring home, too.”

At the end of the series, Yankowskas and Coughlin were the highest ranked American team in the standings, and were also named as second alternates for the Final.

“I guess that made us favorites for the title at nationals,” Yankowskas said. “We didn’t really think about that because our focus is always on our skating. We knew that if we skated well at nationals, then we would probably be in the hunt for the title.”

In January at the 2011 nationals in Greensboro, N.C., Yankowskas and Coughlin appeared cool and confident in the practices leading up to the short program. The duo attacked each element with vigor in the short program and showed a sexier side to their personalities with their sleek choreography. At the end of the night, they landed at the top of the leader board.

Heading into the freeskate, the story behind Yankowskas and Coughlin’s program was making its rounds in the figure skating community. By the time the competition rolled around, the entire audience knew of the enormity of what they were about to witness.

After opening with strong double Axels and a clean triple twist, Yankowskas fought through the landing of their throw triple loop. From that point on, the program became less about the beautifully executed elements, and more about the story that Yankowskas and Coughlin were sharing.

As the program began to build, the raw emotion between the skaters began to grow. Coughlin, in a moment of art imitating life, disconnected from his partner and slipped into his own world of grief. Yankowskas dutifully chased him down, and with a simple touch to the face, opened the floodgates of kinetic dialogue.

“When we start the program, he is telling me his story of what happened to his mom,” Yankowskas said after the skate in Greensboro. “Throughout the program, I am just encouraging him to share it with me, and eventually he just opens up. It brought a lot of meaning to the program, and it wasn’t always easy to get through it.”

At the conclusion of the program and surrounded by a full arena of appreciative fans on their feet and most with tears in their eyes, Coughlin hugged his partner from behind. As they embraced, a poignant shot of Coughlin’s father and sister was broadcast on the Jumbotron. Winning was the icing on the cake for the emotionally exhausted skaters.

“When we came back to the rink, everyone was congratulating us,” Yankowskas said. “It’s still very much a dream come true. A few weeks ago we did a show and they announced us as national champions, and I just looked at John and kind of giggled.”

Coughlin added, “Winning was the culmination of a life long dream. I’ve been in touch with just about everybody who ever helped me along the way to thank them. It’s kind of fun to thank them.”

In February, Yankowskas and Coughlin again competed in the Four Continents Championships, this time in Taipei City, Chinese Taipei, where they finished in fourth place for the second year in a row.

“Our score was much higher this season,” Coughlin pointed out. “Our program component scores just keep getting better, and it’s encouraging to know that all of the things that we are working to improve are being acknowledged in our scores.”

Yankowskas and Coughlin are currently preparing to make their fourth trip to Asia this season to compete in their first World Championships to be held in Tokyo, Japan.

“We’ve been building up to the World Championships, and we really want to have those great performances there,” Coughlin said. “Amanda (Evora) and Mark (Ladwig) and we would really like to earn three spots for the U.S. at next year’s World Championships, so that is another goal that we want to accomplish.”

Outside of skating, Yankowskas enjoys shopping, trail running, and hanging out with her friends. The Nashua, N.H. native has an older sister named Erica who is a graduate student at a university in New England. Her father, who is a general dentist, still lives back in New England, while her mother lives with Yankowskas in Colorado.

“My sister is trying to get through school as quickly as possible so that my mom can move back home with my dad,” Yankowskas said.

When Coughlin isn’t working or skating, he likes to listen to music and organizing big groups of people to go to the movies.

“If I had a day off from skating, I would sleep in to start and hopefully watch some sports on TV,” he said. “Right now if I would love to organize a barbecue. I have this new grill that I’m just waiting to get uncovered, and it’s starting to warm up here.”